One man’s trash: The average British adult has around £598’s worth of unused gadgets just gathering dust about their home, study finds

The average British adult has around £598’s worth of unused gadgets just gathering dust about their home — equal to some £16.5 billion of tech — a study has found.

However, these forgotten gems may not stay so precious, as smart phones, tablets, computers, and consoles have depreciated by some 20 per cent in the last year.

However, in the same period, used iPhones have fallen in worth by an average of 36 per cent, according to figures from British online retailer musicMagpie.

Over the past 12 months, Samsung phones such as the Galaxy S10+ have also lost around £127 in value, while the MacBook Pro Core i7 had dropped some £105.

Similarly, tablet devices have lost as much as £93 in value, while some smart watches have depreciated by £49.

The average British adult has around £598’s worth of unused gadgets just gathering dust about their home — equal to some £16.5 billion of tech — a study has found

The study of 2,000 adults commissioned by musicMagpie found that Britons typically own 11 unused devices on average — including laptops, games consoles, tablets, wearable tech and mobile phones.

Rather than sell their unwanted tech and pocket some cash, however, 32 per cent were found to have been keeping them on hand ‘just in case’.

‘There is so much tech people are holding onto that could otherwise help make them money and alarmingly, the value of it is depreciating right before their eyes,’ said musicMagpie’s chief marketing officer Liam Howley.

‘Mobile phones that get pushed into the back of a drawer, or games consoles gathering dust in cupboards and boxes could be worth far more if they are resold when they’re no longer in use.’

‘Our research has shown that not everyone is aware their tech could actually be worth something — and they think that it’s more worthwhile keeping it for a rainy day, but it’s quite the opposite.’

The polling also found that mobile phones appear to be the gadgets that people are the most likely to hold on to — with the average person having at least two unused handsets lying around at home, while 12 per cent had five or more.

Although four-in-10 people hang on to old tech because they think they might use it again, 27 per cent said that they just could not be bothered to do anything with it.

Meanwhile, 10 per cent reported holding onto old gadgets so that their children could play with them, whereas a fifth said they kept them for sentimental reasons.

As a result, 43 per cent of those polled described themselves as ‘tech hoarders’, yet more than half said that they wished that they could live a more minimalist lifestyle.

More than a third said that they even have a specific drawer or box to keep old gadgets in — often in an attic or a bedside table.

The study of 2,000 adults commissioned by musicMagpie found that Britons typically own 11 unused devices on average — including laptops, tablets, wearable tech and mobile phones

A lack of motivation was cited as the main reason the participants had not sorted through their old gadgets — alongside a lack or time and uncertainty as to what to do with them.

In fact, people are more likely to sort through the contents of their garage, organise their book shelf or clean the utility cupboard than sort through their old devices, the researchers found.

The study, conducted via OnePoll, also found that adults typically keep unused mobile phones for as long as four years before doing something with them, while laptops or computers are usually held onto for around five years.

Nearly two-fifths of respondents said they had no idea that they could earn money by selling their old tech — or that certain gadgets depreciate significantly over time. 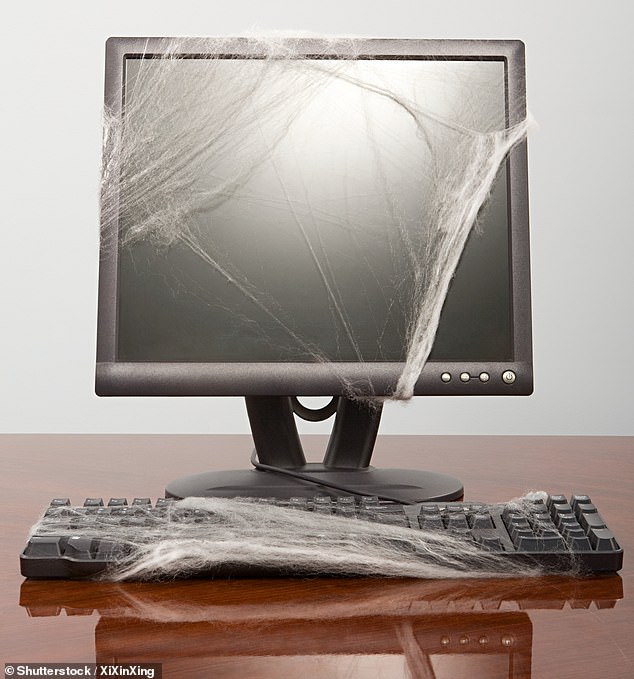 It also emerged that 17 per cent of participants had bought a new piece of technology within the last eight weeks to help them work from home, stay connected to family and friends or keep themselves entertained.

Yet 58 per cent of these adults had not sold the old devices they are now no longer using, while only one in 20 of those polled said that they would trade in their existing mobile rather than end up with an unused handset.

In fact, the study found that Britons are twice as likely to keep hold of old tech as spares than they would be to try to sell them online.

However, 80 per cent of those polled said that they felt that new tech models are released far too often, while 76 per cent said they could not afford to keep buying the latest tech — and 77 per cent wished that their tech lasted longer.

‘It’s clear from our research that something has to change in the way that we purchase and recycle tech,’ said Mr Howley.

‘This circular economy model sees old tech being sold back for cash, then refurbished to a high standard and sold back on for the next person to use.’

‘This, in-turn, reduces the mountains of e-waste going into landfills across the world, but also the landfills sitting in people’s drawers and cupboards.’

The full findings of the study were published on the musicMagpie website.

HOW FAST ARE YOUR UNUSED GADGETS DEPRECIATING?

According to British online retailer musicMagpie, the following are some of the fastest depreciating gadgets at present — with the figures showing how much value each has lost in the last 12 months.