The big toe was the LAST part of the human foot to evolve because our ancient ancestors still needed chimp-like feet to climb trees, scientists say

The big toe was one of the last parts of the foot to evolve, a new study has revealed.

A rigid toe allows us to walk and run upright, however, scientists say this bone structure evolved well after the rest of the toes in the human foot.

The latest findings suggest that while early humans were able to walk upright for more than 4.4 million years, they did not start walking like we do until much later.

Until now, debate has raged over whether our earliest ancestors strode like modern humans or used a more awkward crouching stance like that of gorillas.

Scientists believe the toe was one of the last parts of the foot to change because humans still needed it to grip when climbing trees. 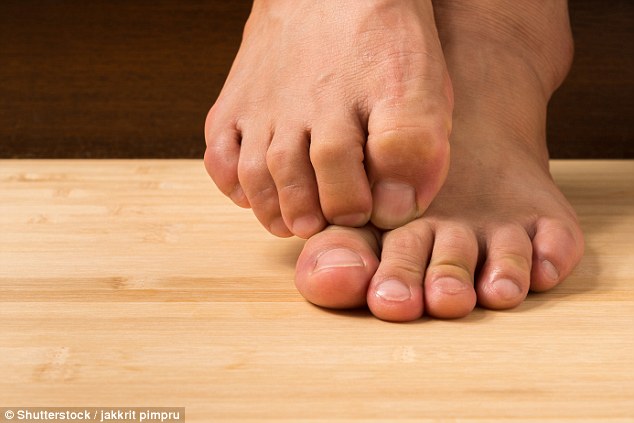 ‘Our ability to efficiently walk and run on two feet, or be “bipedal”, is a crucial feature that enabled humans to become what they are today,’ lead author of the study Dr Peter Fernandez, from Marquette University in Milwaukee told BBC.

‘For everything to work together, the foot bones first had to evolve to accommodate the unique biomechanical demands of bipedalism.

‘The big toe could still be used for grasping, as our ancestors spent a fair amount of their time in the trees, before becoming fully committed to walking on the ground,’ said Dr Fernandez.

MailOnline has contacted the researchers to find out exactly when they now believe the big toe evolved in early humans.

The latest findings suggest the change in bone structure that created the rigid big toe started around the same time as the evolution of the genus Homo, which is widely believed to have happened some two million years ago.

Researchers analysed the changes in ancient toes by creating three-dimensional scans of the toe bone joints from living and fossilised human species, as well as a number of primates.

These were then mapped onto an evolutionary tree.

‘The primate foot functions as a grasping organ,’ researchers wrote in the paper published in the journal Proceedings of the National Academy of Sciences.

‘As such, its bones, soft tissues, and joints evolved to maximise power and stability in a variety of grasping configurations.’ 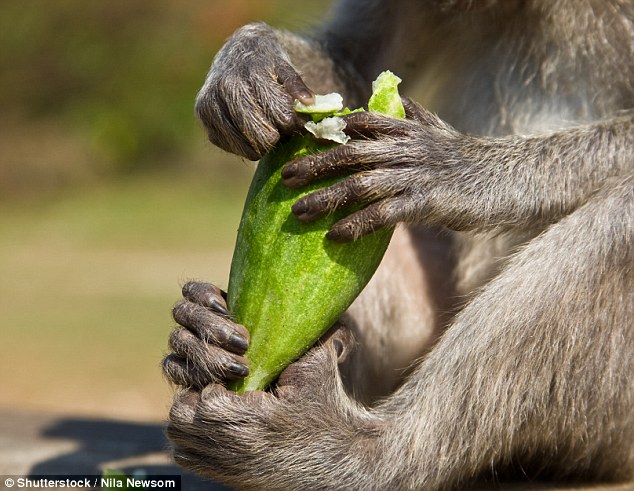 2.3 million years ago – Homo habalis first thought to have appeared in Africa

It is still not known exactly why our ancestors started walking on two feet, but some experts believe it’s likely because it allowed us to carry things with our hands.

Others have credited the change with a global deforestation at the time.

Marquette University researchers say they would now like to conduct similar analyses on the remaining bones in the forefoot.

Debate has raged over whether our earliest ancestors strode like modern humans or used a more awkward crouching posture like that of chimpanzees and gorillas.

It means Lucy, the famous ‘mother of man’ discovered as a 3.2 million year old skeleton, may have paced around just like us. 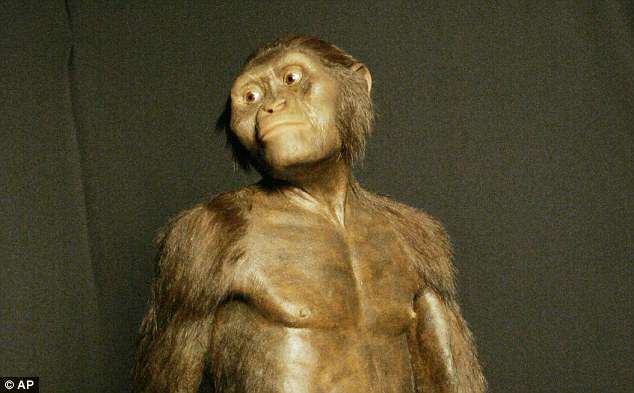 Lucy, the famous ‘mother of man’ discovered as a 3.2 million year old skeleton (pictured in a model in Houston), may have paced around just like us

WHY DID ARDI WALK ON TWO LEGS?

‘Ardi’ – the world’s most complete early hominid skeleton – was a female member of the primate species Ardipithecus ramidus.

Her unusual skeleton, which some have claimed to be the oldest member of the human family tree, has baffled scientists since it was discovered in Ethiopia in 1994.

Short, hairy and with long arms, Ardi roamed the forests of Africa 4.4 million years ago, but scientists were unsure whether she was more closely related to humans than to apes.

Conventional wisdom says our earliest ancestors first stood up on two legs when they moved out of the forest and into the open savannas.

But this does not explain why Ardi’s species was bipedal (able to walk on two legs) while still living partly in the trees.

Dr Owen Lovejoy from Kent State University has previously said the answer could be as simple as food and sex.

He pointed out that throughout evolution males have fought with other males for the right to mate with fertile females.

Therefore you would expect dominant males with big fierce canines to pass their genes down the generations.

But say a lesser male, with small stubby teeth realised he could entice a fertile female into mating by bringing her some food?

Males would be far more successful food-providers if they had their hands free to carry home items like fruit and roots if they walked on two legs.

Mr Lovejoy said this could explain why males from Ardi’s species had small canines and stood upright – it was all in the pursuit of sex.

He added that it could also suggest that monogamous relationships may be far older than was first thought.