Prostate cancer touches almost every American in some way.

It is the mostcommon form of cancer in men, according to the National Cancer Institute, and it affectsmore than one in every five men in the US at some point in their life. Though survival rates are improving, prostate cancer is still the second leading cancer killer for men, after lung cancer.

But the disease’s cause is largely still a mystery to scientists and doctors.

Now,a recent study of men with prostate cancer who were first responders during the September 11 World Trade Center attacks is giving researchers fresh clues about how the disease works. The results suggest that exposure to the toxic dust at Ground Zero may have changed how a body responds to cancer, even years later, in some devastating ways.

“It suggests that the dust could have somehow changed the person’s immune system,” Dr. William Oh, the lead author of the study and an oncologist at Mount Sinai in New York, told Business Insider when it was released in June.

In short, the study found that breathing in lots of toxic dust may trigger chronic inflammation and fuel tumor growth, changing the way a person’s genes operate and leading to more cancer.

Overall, research suggests that first responders who were at Ground Zero nearly 18 years ago have a65% increased risk of developing prostate cancer, compared to the general population. That’s a much more noticeable difference than researchers have found for lung-cancer rates in 9/11 survivors. Also alarming is the fact that many 9/11 survivors in their 30s and 40s are developing prostate cancer, since the disease usually affects men in their 60s and older. At least2,219 first responders who were at the 9/11 site have prostate cancer now, along with 708 other survivors.

“If it was just a matter of exposing yourself to all of these terrible things, you’d have lung cancer before you’d have prostate cancer,” Oh said. “We’re looking at an organ that’s very far away from the lungs.” 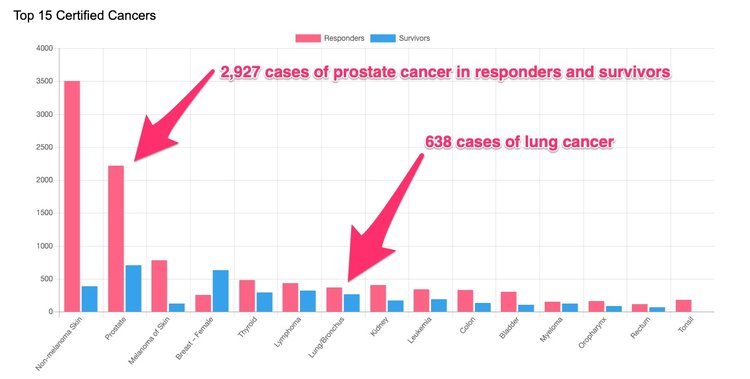 There were a lot of potentially cancer-causing and tumor-promoting agents in the dust that 9/11 responders were exposed to in 2001, including some compounds which may interfere with our thyroid system. The list includes asbestos, silica, cement, PCBs (polychlorinated biphenyls), and PAHs (polycyclic aromatic hydrocarbons), to name a few.

Read More: A toxic-chemicals expert is sounding the alarm about 4 cancer-linked chemicals that could be making us sicker and fatter

When researchers took a look at the tumors of men who’d been exposed to that dust, they found their cells were more receptive and sensitive to cholesterol, a red flag for aggressive prostate cancer. (Cellular cholesterol is a precursor to androgens, thesex hormones which drive prostate cancer development.)

To better investigate what might have been happening in the first responders’ bodies after their initial exposure to the toxic dust, the researchers also dosed some rats with some of the rare remaining dust collected in the hours and days after the 9/11 attacks. They found that the rats, much like the men, had a heightened inflammatory response shortly after they were exposed to the dust. After a month, dust-exposed rats also had more cholesterol-receptive genes, again suggesting there’s something in the dust that may fuel prostate cancer growth and lead to more aggressive prostate cancer cases.

Prostate cancer is stealthy and it can be deadly:It is often slow-growing and relatively symptom-less, quietly sitting in a gland no bigger than a golf ball, located just below a man’s bladder.

Oh hopes that eventually his team’s findings will help oncologists determine better ways to prevent aggressive prostate cancer cases before they start or treat them with novel immunotherapies, whichoften work by knocking out some of those cholesterol-fueled male sex hormones. He also noted that the study raises fresh questions about the ways in which the places we live and the pollution we breathe could contribute to our cancer risk.

“I don’t think people downtown have anything more to worry about than anyone living in any other city at this point,” he said. “But what else are we breathing? What else is changing our immune system in a way that might be facilitating the growth of cancers like prostate cancer?”

Update: This story was originally published on June 20, 2019, when the study first came out. We’re resurfacing it today (with updated cancer case counts) for the 9/11 anniversary.