Whether it’s a classic Dairy Milk bar or a more exotic Bounty, taste is key when it comes to chocolate.

But a new study has shed light on another crucial aspect of chocolate – the way it melts in the mouth.

Scientists from the University of Leeds have decoded the physical process that takes place in the mouth, and suggest that where the fat lies within the chocolate helps to make the texture so appealing.

The team hopes the findings could pave the way for healthier chocolates with the same iconic mouthfeel as unhealthier varieties. 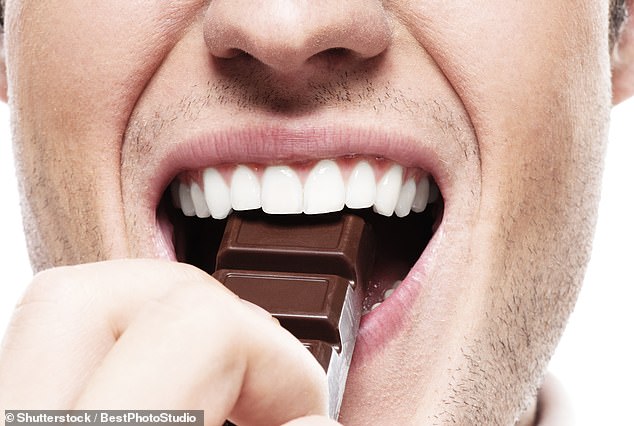 For chocolate fans, the taste is a key part of why they love the treat. However, researchers have now shed light on why the irresistible confectionery feels so good 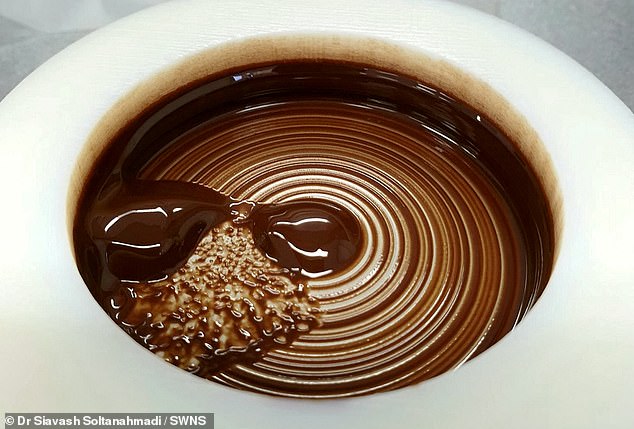 Scientists decoded the physical process that takes place in the mouth when a piece of chocolate is eaten, as it changes from a solid into a smooth emulsion. They suggest that where the fat lies within the chocolate helps to make the texture so appealing

Almost as soon as chocolate comes into contact with the tongue, fat has a key role to play.

After that, solid cocoa particles are released and they become important in terms of the tactile sensation.

Therefore, fat deeper inside the chocolate plays a somewhat limited role and could be reduced without the feel or sensation of chocolate being affected, the researchers suggest.

In the study, published in ACS Applied Materials and Interfaces, the researchers did not look at how chocolate tastes, and instead focused on feel and texture.

Tests were conducted using a luxury brand of dark chocolate on an artificial 3D tongue-like surface.

The tests showed that the ‘chocolate sensation’ arises from the way the chocolate is lubricated.

This is either from ingredients in the chocolate itself, from saliva, or a combination of the two.

When chocolate enters your mouth and reaches your tongue, it releases a fatty film that makes it feel smooth the entire time it is in the mouth.

After that, solid cocoa particles are released and become important in terms of the tactile sensation.

This means that fat deeper inside the chocolate plays a somewhat limited role and could be reduced without the feel or sensation of chocolate being affected, the researchers suggest.

Professor Anwesha Sarkar, professor of colloids and surfaces in the School of Food Science and Nutrition at Leeds, said: ‘Lubrication science gives mechanistic insights into how food actually feels in the mouth.

‘You can use that knowledge to design food with better taste, texture or health benefits.

‘If a chocolate has 5% fat or 50% fat it will still form droplets in the mouth and that gives you the chocolate sensation.

‘However, it is the location of the fat in the make-up of the chocolate which matters in each stage of lubrication, and that has been rarely researched.

‘We are showing that the fat layer needs to be on the outer layer of the chocolate, this matters the most, followed by effective coating of the cocoa particles by fat, these help to make chocolate feel so good.’ 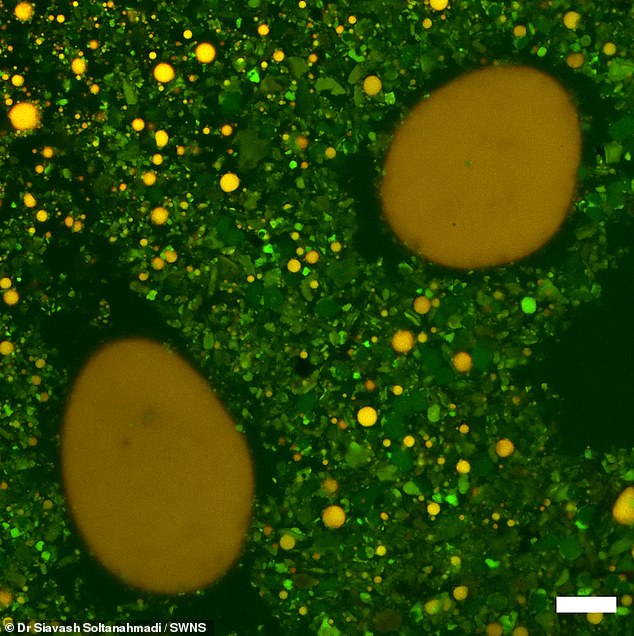 Based on the findings, the researchers suggest that we could develop healthier chocolates with the same melt-in-the-mouth texture as unhealthier varieties.

Dr Siavash Soltanahmadi, from the School of Food Science and Nutrition at Leeds and the lead researcher in the study, said: ‘With the understanding of the physical mechanisms that happen as people eat chocolate, we believe that a next generation of chocolate can be developed that offers the feel and sensation of high-fat chocolate yet is a healthier choice.

‘Our research opens the possibility that manufacturers can intelligently design dark chocolate to reduce the overall fat content.

‘We believe dark chocolate can be produced in a gradient-layered architecture with fat covering the surface of chocolates and particles to offer the sought after self-indulging experience without adding too much fat inside the body of the chocolate.’

The researchers believe the physical techniques used in the study could also be applied to the investigation of other foodstuffs that undergo a phase change, such as ice-cream, margarine or cheese.

The science behind the perfect GRAVY as experts say the ideal jug should be stirred for exactly 2.5 minutes and served at 156F

IS CHOCOLATE GOOD FOR YOU?

Chocolate is undoubtedly the nation’s favourite dietary vice but lots of research over the years has found that it could actually be good for us.

With more than 300 chemicals in chocolate, scientists are investigating a whole range of health benefits linked to the food.

Researchers at Harvard University studied 8,000 men aged over 65 and found that those who ate modest amounts of chocolate lived almost a year longer than those who ate none.

Dr Neil Martin of the Cognition and Research Centre at Middlesex University exposed people to different smells and measured their brain activity.

The results showed that smell receptors in the nasal passages reacted so strongly to the chemical mix in chocolate that it left people on an emotional high.

A 100g bar of dark chocolate gives you 2.4mg of iron and 90mg of magnesium, around one third of the recommended daily amounts.

White chocolate, on the other hand, contains no cocoa solids, just cocoa butter, and is relatively high in fat. A 100g white Toblerone bar has a whopping 540 calories and 30.7g of fat.

Yet, despite its sugar content, chocolate is said by dentists to be less damaging to the teeth than many other sweets because it tends to be chewed quickly, not sucked.

There are also naturally-occurring tannins in chocolate that help to inhibit the growth of dental plaque.

And there is known to be a substance in all chocolate called phenylethamine (PEA), which is produced naturally by the brain and thought to increase levels of the mood-enhancing chemicals, serotonin and endorphins.

In theory, the more PEA you eat, the more amorous and aroused you feel, which is why chocolate has gained a reputation as an aphrodisiac.

A TV series on the Food Network called Food: Fact or Fiction? looks at how eating chocolate affects the brain.

Phenylethylamine stimulates the release of B-endorphin which stokes the production of dopamine and norepinephrine.

These chemicals flood your system when you’re feeling loving.

Theobromine is chemically similar to caffeine and like its chemical cousin it stimulates the central nervous system and also has mood enhancing effects.