A rare northern white rhino embryo has been created by scientists in a bid to keep the species from going extinct after centuries of poaching.

There are only two members of the species left alive and they are both female, so researchers have implanted their eggs with frozen sperm from dead males.

This is the third embryo created by scientists and they are all being stored in liquid nitrogen ready to be transferred to a surrogate mother in the coming months.

The ultimate goal is to create a herd of at least five animals that could be returned to their natural habitat in Africa, researchers say.

Najin, 30, and daughter Fatu, 19, are the last of the subspecies of white rhino, and live under 24-hour armed guard.

In August 2019  they underwent a highly risky procedure carried out by a team of international vets, which saw them anaesthetised for almost two hours.

While asleep their eggs were extracted using techniques that have taken years of research and development.

The eggs used to create all three embryos were harvested from Fatu.

‘Now the team will make every effort to achieve the same result for the 30-year-old Najin before it is too late for her,’ said Thomas Hildebrandt with the Leibniz Institute for Zoo & Wildlife Research in Germany.

The procedure has proven to be safe and can be performed regularly before the animals become too old, the team said.

‘Five years ago, it seemed like the production of a northern white rhino embryo was an almost unachievable goal – and today we have them,’ said Jan Stejskal, communications director at the Dvur Kralove Zoo, where Najin and Fatu were born.

WHY ARE WHITE RHINOS AT RISK?

Today, poaching for their horn is the main threat.

The white rhino is particularly vulnerable to poaching because it is relatively unaggressive and lives in herds.

The next step is to select female southern white rhinos among those at Kenya’s Ol Pejeta Conservancy to serve as a surrogate mother, Kenya’s wildlife minister said.

There are five rhino species remaining on earth, of which black and white rhinos are found in Africa. The northern white rhino is generally considered a subspecies of white rhino although some scientists believe it to be a sixth species.

Rhinos have few predators in the wild due to their size but have been devastated by poaching for their horns – used in traditional Chinese medicine.

The last male northern white rhino was a 45-year-old named Sudan, who gained fame in 2017 when he was listed as The Most Eligible Bachelor In The World on the Tinder dating app as part of a fundraising effort.

Sudan, named for the country where he was born in the wild, was euthanised in 2018 because of age-related ills. 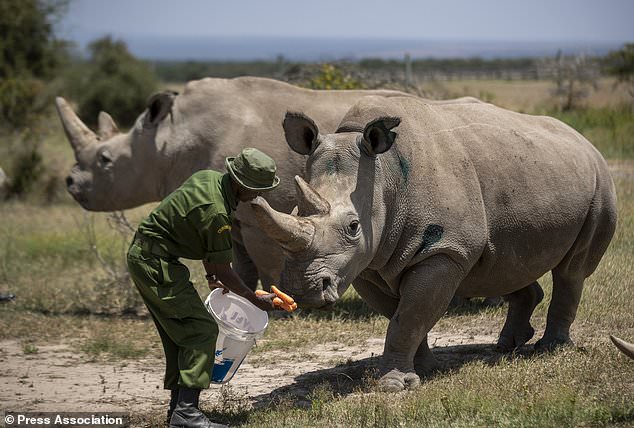 Modern rhinos have plodded the earth for 26 million years. As recently as the mid-19th century there were more than one million in Africa.

The western black rhino was declared extinct in 2011.

It is hoped a revived population – which could take up to 70 years – could eventually be re-introduced into secure habitats in these areas.

HOW DO SCIENTISTS HOPE TO SAVE THE NORTHERN WHITE RHINO USING IVF? 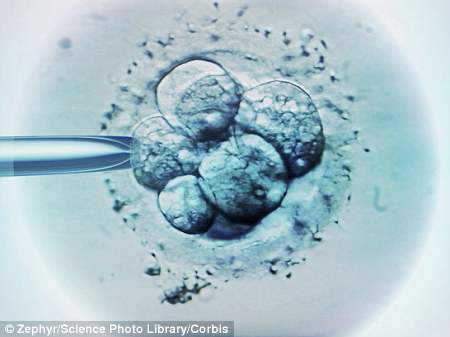 While the death of Sudan marks a symbolic turning point in the fight to save the northern white rhino, in fact the survival of the species has been entirely reliant on untested IVF techniques for years.

It was hoped that Sudan, his daughter Najin and granddaughter Patu might be able to produce offspring when they were moved to Kenya in 2009, but their close genetic relationship rendered them infertile.

Since at least 2015 scientists have been working with IVF and stem cell techniques in the hopes of being able to create a viable northern white rhino embryo, according to a GoFundMe page for the project.

Researchers in Berlin and San Diego are using DNA samples collected from a dozen northern whites, including Sudan, and trying to apply techniques developed for humans to the animal.

If a viable embryo can be created, it would then have to be implanted into the womb of a southern white rhino, since Majin and Patu will likely be dead before the technique is perfected.

While the southern white rhino would be responsible for giving birth to the baby, because the infant’s genetic material came solely from northern whites, it would be a member of that species.

However, as Save The Rhino points out, the process is fraught with difficulty and has a low chance of success.

In the last 15 years just 10 rhino births have resulted from artificial insemination and only two embryos have ever been created – one of which divided into two cells before perishing, and the other one into three.

For the northern white rhino to be genetically viable a minimum of 20 healthy individuals must be born – meaning the whole process must be successfully completed 20 times – to avoid inbreeding.

Then, it would be necessary to find a suitable habitat for them, since their old habitat has largely been destroyed and led the species to the brink of extinction in the first place.