Emoji reactions are sliding into your DMs: Twitter lets users react to direct messages with laughter, a flame or a thumbs down

Emoji reactions are sliding into your direct messages as Twitter lets users react to DMs with seven new icons including laughter, a flame or a thumbs down.

Unlike Facebook, which first introduced emoji reactions in 2016, Twitter is only making them available in direct messages, not public tweets.

There are seven emoji options that can be attached to an image or a message: laughing out loud, shock, crying, heart, fire and thumbs up or thumbs down.

Twitter has not said whether it plans to roll out the new reactions across the entire platform, or whether they will remain just for direct messages.

There are seven new emoji reactions available to Twitter users including the classic heart, laughing, shock, crying, fire, thumbs up and down

You’ll still be able to send any emoji available on your device as a reply – but just like ‘likes’, these will appear as a reaction to a message.

To access the emoji reactions you can either click the outline of a heart next to a message or double tap on the message itself. This brings up the reaction panel.

When you send a reaction, the recipient will get a notification in the same way they’d be notified if you liked a message.

Twitter users responded to a message about the new addition from the social media platform by listing other changes they felt were more important.

Top of the new feature requests was an edit button, with users wanting to be able to fix spelling errors or typos in tweets after they had been sent.

One user, Tracy Pardue, responded to Twitter by saying: ‘We want an edit option… When do we want it, now!!!! 🙂 x’

Seaside Trader said: ‘You guys are really knocking yourselves out over there. Epic changes!!! Now where’s my edit button?’

There was some support for the emojis, with one user talking about the benefits in a group chat, allowing people to respond without having to write anything.

Twitter first revealed the news with a simple post showing the new reactions, that add to the existing ‘heart’ emoji that is also available on normal tweets and saying ‘sliding into your DMs’. 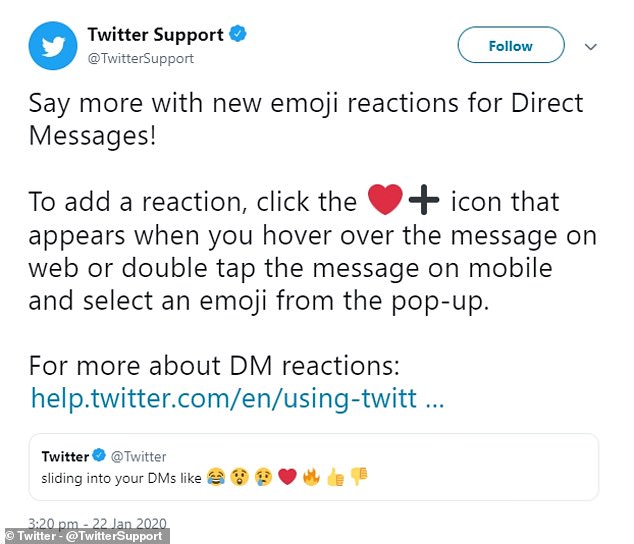 A few hours after the initial post it was retweeted by Twitter Support, which explained that the company was adding the reactions to direct messages.

While the reaction was positive overall, there were questions from users about why it wasn’t being added to tweets as well.

GirlNamedBoston tweeted: ‘This is pretty cool. Can you add the feature to tweets as well? Certain tweets (such as someone tweeted the death of a loved one) I want to ‘like’ but a heart just doesn’t seem appropriate’.

A lot of platforms have added the ability to ‘react’ to posts using an emoji – Apple lets you add a graphic to the corner of a message and Facebook allows their use in direct messages and posts.

HOW TO ADD A REACTION EMOJI TO A TWITTER DIRECT MESSAGE?

You can add an emoji reaction to text or media within a direct message on Twitter but how it works varies by platform.

To add a reaction, hover over the message and click the reaction button (heart and plus icon).

You can also double tap on the message and pick an emoji from the pop-up.

You can undo a reaction at any time and it will be removed from the message for all participants.

Click or tap on a reaction in a conversation to view who reacted to the message – which is particularly useful for group messages.

Additionally, all conversation participants will receive a notification any time a new reaction is added to a message.