Two dead satellites orbiting the Earth at 50 feet per second could collide above the USA on Wednesday creating a dangerous field of debris and space junk.

Specialist space tracking company, LeoLabs, said the two objects will pass about 50 feet from one another, which is unusually close and increasing the risk of a collision.

If they collide it will be 560 miles above Pittsburgh, PA at 23:39 GMT on Wednesday, but will have no impact on the Earth as debris would burn up in the atmosphere.

If the satellites hit each other at speed it would destroy the smaller science payload and generate pieces of debris that could potentially hit other satellites. 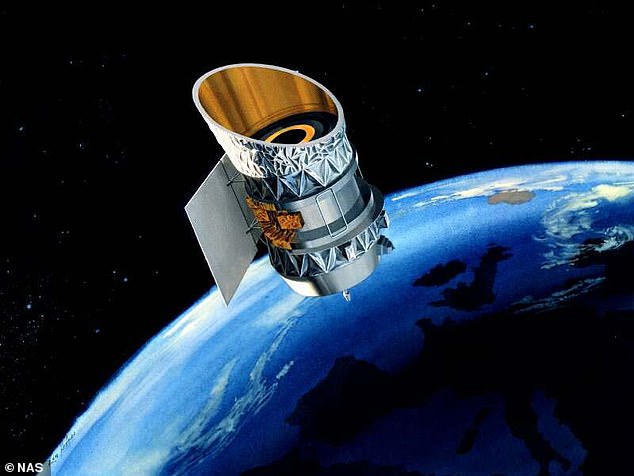 Two dead satellites, including the IRAS space telescope, orbiting the Earth at 50 feet per second could collide above the USA on Wednesday creating a dangerous field of debris

The decommissioned telescope is called IRAS and was launched in 1983 as a NASA, Netherlands and UK partnership to survey the entire night sky in infrared.

The other satellite is called GCSE 4 and is a retired science payload used for experiments – it was launched in 1967.

The close approach and the speed they are moving ‘is especially alarming’ due to the size of the larger object, according to LeoLabs.

IRAS is 11.8 feet long and the combined size of the two objects ‘greatly increases the probability of a collision’.

Because both satellites are dead, with no fuel or ability to power up, there is no way for Earth to communicate with them to conduct evasive manoeuvres.

‘Events like this highlight the need for responsible, timely deorbiting of satellites for space sustainability moving forward,’ the tracking company said in a Tweet.

There are a number of projects in development to tackle situations like this, including one by the European Space Agency that could see dead satellites captured and safely deorbited.

Unfortunately the ClearSpace-1 mission, which will be the first to remove an item of debris from orbit, isn’t planned for launch until 2025.

ESA will commission the technology and operations of the mission from commercial companies in a hope of ‘triggering a new industry in deorbit services’.

In the same way private rocket launch companies take payment for putting satellites in orbit, in future private organisations could be paid to bring them back down. 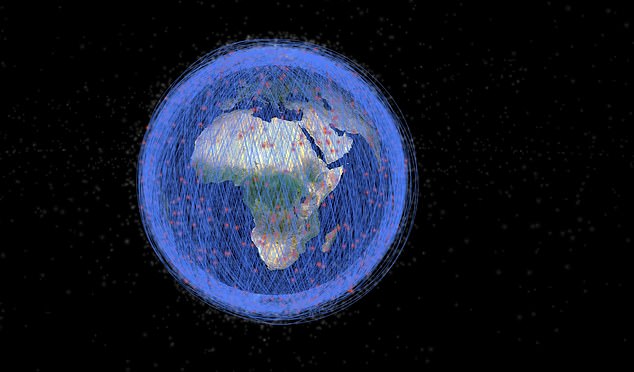 In 2009 commercial communications satellite Iridium 33 collided with the derelict Russian military satellite Kosmos-2251 at a speed of 26,000 miles per hour – the blue lines in this graphic show the orbit of the thousands of pieces of debris that resulted in the crash

The fallout from a satellite collision can be significant, resulting in thousands of pieces of space junk.

An example of a collission is from 2009 when an active commercial communications satellite called Iridium 33 collided with the derelict Russian military satellite Kosmos-2251 at a speed of 26,000 miles per hour.

NASA estimated that within just 10 days of the crash more than 1,000 pieces of debris larger than three inches had been created out of the accident.

While the debris didn’t directly hit any other satellite, it did cause the International Space Station to have to perform an avoidance maneuver two years later in 2011.

‘Imagine how dangerous sailing the high seas would be if all the ships ever lost in history were still drifting on top of the water,’ says ESA Director General Jan Wörner.

‘That is the current situation in orbit, and it cannot be allowed to continue.’

WHAT IS SPACE JUNK?