Home » Science » UK &apos;tree deserts&apos; where 2 per cent of land is covered with greenery

Revealed: The UK ‘tree deserts’ where just 2 per cent of land is covered with greenery… as Daily Mail gives away free* oaks to boost tree planting campaign

Parts of Britain are desperately short of trees, data captured by satellite shows.

Barely 2 per cent is covered by trees in the worst areas – compared with 40 per cent in the greenest.

The Daily Mail’s Be A Tree Angel campaign is offering readers the chance to help start redressing the balance. 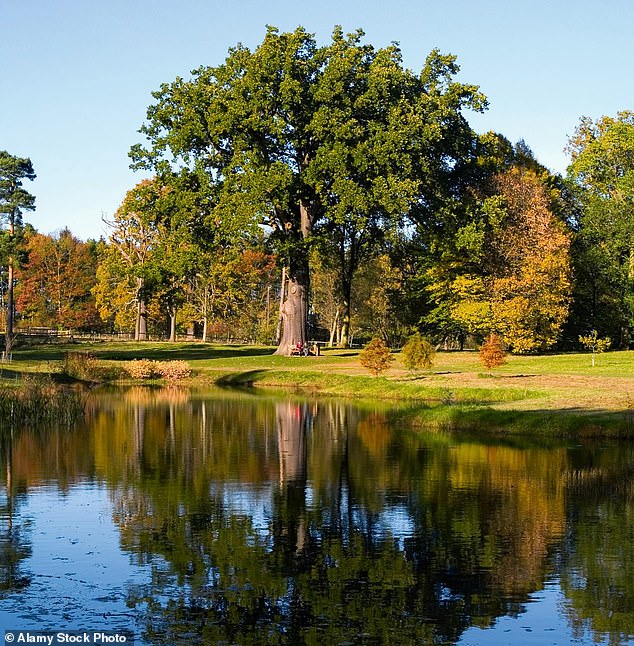 Working with the Tree Council, the paper is giving away thousands of saplings and encouraging readers to donate to a fund to plant thousands more.

There has been barely any increase in tree cover from government-supported tree planting projects since 2010.

And low tree cover is not just a problem in urban areas. Friends of the Earth used satellite information from the National Tree Map by data company Bluesky to establish that very little has been done to plant more trees in some of the country’s most sparse spots.

The research found South Holland in Lincolnshire, a largely agricultural area, had the lowest levels of tree cover in England at 2.1 per cent. Incredibly, this was even lower than the City of London, at 4.4 per cent. The average across England and Wales – where the research was carried out – is 13 per cent.

Other rural areas such as East Riding, Fenland and East Cambridgeshire were also among the ten areas with the lowest level of tree cover.

Data suggests none of these ten have seen significant government-support for tree planting – with three of them not seeing any planting at all.

The revelations follow the news in Saturday’s Mail that councils have hacked down more than 100,000 trees in the last three years. 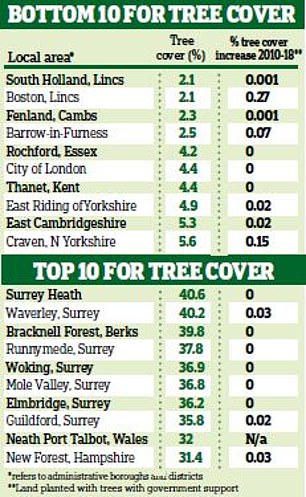 Emi Murphy, trees campaigner at Friends of the Earth, said: ‘The UK is facing a critical shortage of trees. It’s unforgivable to see these areas with the lowest tree cover haven’t seen significant tree planting for years.

‘Even places dense with buildings or farmland can increase their tree cover and must do so if we’re going to stop climate breakdown. Recent tree-planting pledges from political parties are a start but we need to see more from them.

‘We’re calling on all political parties to commit to doubling tree cover. This is one of the key solutions to solving the climate crisis but has been neglected for years.’

Sanjay Singh from the People’s Postcode Lottery, which is funding a tree-planting programme along with Friends of the Earth, said the initiative was providing support for community tree-planting events in Oxford, Manchester, Nottingham and Enfield in north London during National Tree Week, which runs until this Saturday.

‘The climate and nature crises need action now if we’re going to avoid it getting any worse,’ he said. ‘Thanks to support from our players, charities such as Friends of the Earth, Woodland Trust and National Trust are able to plant more trees and protect woodland.’ 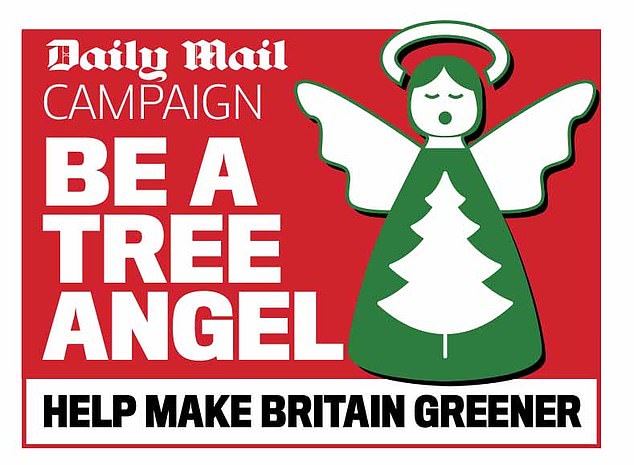 Friends of the Earth is campaigning to double UK tree cover as part of the fight against the climate crisis.

Planting your place in history: GUY WALTERS recalls the spiritual joy he felt at planting a new tree five years ago

It had been a good lunch, as Sunday lunches ought to be, with plenty of roast beef, red wine, pudding, and loved ones.

It was the middle of January, and so the sun had already sunk low and pale gold as we drained our coffee, and we knew there was not much time for what we had to do.

It was also cold, and the temptation of the log fire was great.

Perhaps it could wait until tomorrow, when it was warmer and we were feeling more active. 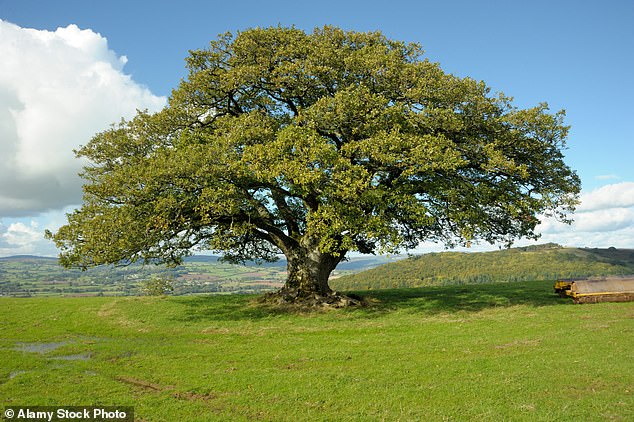 But there’s an old Chinese proverb, the one that states that the best time to plant a tree was 20 years ago, and the second best time is now.

There could be no more waiting. It was on with boots, coats and gloves, and along with spades, forks, soil, and two curious dogs we carried our precious and fragile load into the green heart of the meadow.

The children watched as we dug out rolls of turf, complaining of the cold and insisting that planting an oak tree in the middle of a field was a stupid idea. Trees belong in woods, declared my daughter, not out in the open, all by themselves.

How wrong she was, I told her as we patted the last of the soil around the base of the sapling.

There was nothing more English than an oak tree in the middle of a meadow, I insisted, telling her that the playwright Willy Russell had even chosen an English meadow with an oak tree as his luxury on Desert Island Discs. Come back to me in a hundred years, I said, and she would see I was right.

Of course, no child can really understand the magic of planting a tree, especially an oak. You have to be fully aware of your mortality to appreciate that sense of bequest, and the humbleness you feel when you start a story whose end you know you can never see.

And of course, with planting an oak, not even our children’s children will witness the conclusion of the story we started telling that late afternoon five years ago.

But if she lives well, my doubting daughter will be able to sit in the shade of our oak at the end of this century, and reflect that her long-departed Daddy was perhaps, on this occasion at least, right. 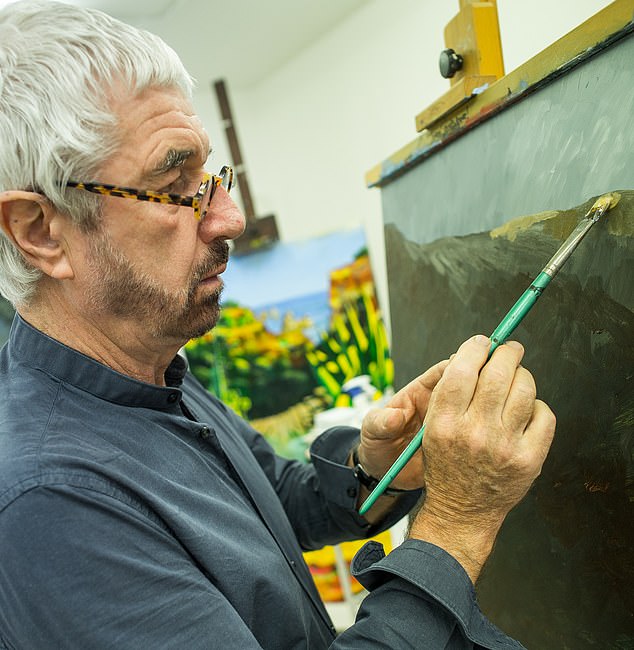 And even if she still thinks I was wrong, she may at least smile at her own stubbornness, and stiffly gaze up at her great-grandchildren climbing the boughs over her head.

For that is the true beauty of planting trees – you are creating a legacy, partly born out of that vain and fruitless private longing for a form of immortality, but also for the benefit of future generations.

When I look at the calm majesty of a two-hundred-year-old oak, I do not just marvel at the tree itself, but I thank the man or woman who decided to plant it when Nelson was at Trafalgar, and the United States was only on its third president. She is now on her 45th.

Such a tree is literally rooted in history and – more awesome still – it will be standing with a 90th president in the White House – for trees represent the future just as much as they do the past.

And there is something so uniquely English about the oak, the history of which is forever intertwined with our nation.

It was the mighty oak whose timbers built our Royal Navy – and a mighty oak that gave King Charles II a hiding place from the Roundheads. Who knows, maybe a future king will hide in mine one day? Compared with oaks, we humans are but short-haul passengers – trees are here for the long haul.

By the time our oak reaches maturity, every atom in my body – and indeed your body – will have been absorbed elsewhere. We will not only be dead; not even our corpses will remain. But the benefits are not just romantic or aesthetic, they are also ecological. Trees do our dirty work, and boy, is that work dirty.

By now, we all know how essential they are for cleansing the air of the millions upon millions of tons of carbon dioxide we pump into it, and yet despite this, all across our browning, gasping planet, trees are being felled at unsustainable levels.

We clearly need to stop chopping and to start planting, not just for the pleasure of future generations but for their very existence – for a world without trees is no world at all. Even if you have already planted a tree, you can always plant another. Every day this week the Mail is giving away a different variety of grow-your-own tree. Today, it is the mighty oak.

So, how is our oak sapling doing after half a decade? I would like to say that she is prospering, but she has had a tough start. Never the prettiest of saplings, she has required some tough cosmetic pruning to get her into a shape that will look good in the year 2300.

As a result, there is still something more twiggy than majestic about her, but it is, after all, very early days.

She is a survivor, and slowly, she grows still. I walk past her every day, and I see majesty in the making.

So where will you plant yours?

To claim your free* oak and learn more about our campaign just visit www.beatreeangel.co.uk