Humanity is presiding over ‘unprecedented’ losses to nature and is not doing enough to prevent destruction of the world’s ecosystems, a landmark report claims.

The Global Biodiversity Outlook 5 report, published by the UN Convention on Biological Diversity (CBD), reveals the world has failed to meet a series of key targets set a decade ago to save the world’s biodiversity.

In 2010, the  ‘Aichi Targets’ were developed and hailed as the blueprint for saving life on Earth.

This latest report reveals that none of these were fully met, with only six being classed as ‘partially achieved’.

Professor Jane Memmott, who is president of the British Ecological Society and was not involved in the report, says: ‘The crisis in nature is such that we need to act now.

‘We are dependent on the natural world for our food, wellbeing and prosperity and the current rate of loss of species is seriously worrying.’ 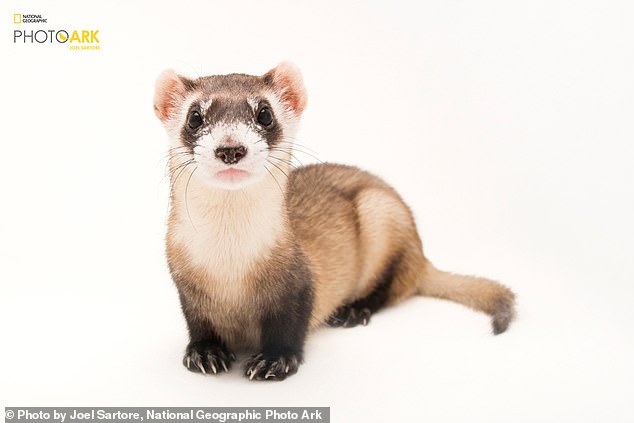 Ongoing conservation efforts have also saved some species from extinction, which would otherwise have been consigned to the history books, such as the black footed ferret. Pictured here by the National Geographic PhotoArk 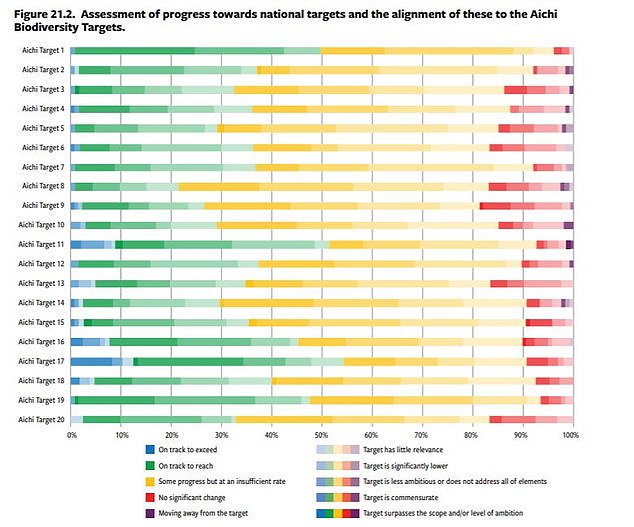 Pictured, the percentage of parties which signed up to the Aichi Targets and how they measure up to each of the 20 goals. Globally, none of the targets will be fully met by this year’s deadline, and only six will be partially achieved, the report warns

Key numbers from the report

$500 billion – Value of government subsidies that potentially cause environmental harm,

1.7 – Number of ‘Earths’ needed to regenerate the biological resources used by humanity from 2011 to 2016

33% – Reduction in global deforestation rates comparing the last five years with rates in the decade to 2010.

260,000 tonnes – Weight of the estimated 5.25 trillion plastic particles in the world’s oceans

60%+ – Proportion of world’s coral reefs under threat, especially due to overfishing and destructive fishing

The report acts as a global score card for the 20 ‘Aichi Biodiversity Targets’ agreed in 2010, which were designed to provide a comprehensive set of goals encompassing all aspects of conservation.

None of the targets will be fully met by this year’s deadline, and only six will be partially achieved, the report warns.

The UN report does not provide a breakdown by nation, but according to conservation charity the RSPB, the UK has been spectacular in its negligence.

It estimates Britain has has failed to meet most of the Aichi targets, including ensuring the protection of areas that look after wildlife, reversing species’ slide towards extinction and funding nature.

The UK Government claims it has hit a third of its targets, but RSPB analysis shows the UK may have met as few as just three of the 20 international targets it agreed to a decade ago, and in six areas the UK has actually gone backwards.

Despite the sorry state of affairs and the poor collective effort to reach these targets, which were created to ensure the long-term viability of the world’s biodiversity as well as our own species, there are some signs of progress, the report reveals.

Professor Tom Oliver, Professor of Applied Ecology, University of Reading, said: ‘The report shows progress in some areas, for example in the extent of protected areas.

‘Many of the easier solutions have already been made, however, and we now need to tackle the tougher challenges.’

One of the successful changes which has been achieved is a fall in the rate at which forests are being destroyed. Other positives include the improved identification and eradication of invasive species which threaten native wildlife.

Ongoing conservation efforts have also saved some species from extinction, which would otherwise have been consigned to the history books.

For example, New Zealand’s black stilts, the Javan rhinoceroses and black-footed ferrets have all been saved from oblivion in the last decade.

Elizabeth Maruma Mrema, executive director of the CBD, said: ‘Many good things are happening around the world and these should be celebrated and encouraged.

‘Nevertheless, the rate of biodiversity loss is unprecedented in human history and pressures are intensifying. Earth’s living systems as a whole are being compromised.

‘And the more humanity exploits nature in unsustainable ways and undermines its contributions to people, the more we undermine our own well-being, security and prosperity.’

In 13 of 60 total areas outlined in 2010, no progress has been made, and for some the situation has worsened.

For example, wetland declines have worsened, damage from fishing is increasing and more species — around a million — are now threatened with extinction.

A shocking statistic from the report is that approximately $500 billion (£390 million) of funding is provided every year in government subsidies for projects which have an undisputed negative impact on nature.

A fifth of this is dedicated to unsustainable agricultural practices.

Ms Mrema adds: ‘As nature degrades, new opportunities emerge for the spread to humans and animals of devastating diseases like this year’s coronavirus.

‘The window of time available is short, but the pandemic has also demonstrated that transformative changes are possible when they must be made.’

Report card on the 20 Aichi Targets

While the report warns changes are urgently needed to ensure human wellbeing and save the planet, it offers a glimmer of hope.

It outlines eight transformative changes which are needed to slow, and eventually halt, the demise of nature.

These include a shift to sustainable farming, mostly ‘plant-based diets’ and more moderate meat consumption.

The report also warns that more efforts are needed to conserve and restore forests and other wild areas and to tackle climate change.

Professor John Spicer, Professor of Marine Zoology at Plymouth University, said: ‘The report’s recommended eight transitions away from ‘business as usual’ contain much that is familiar.

‘However, they feel new and now maybe even possible. The UN report shows that though the successes of the last 10 years are limited, they are possible.

‘Change is possible. One of the new elements in the UN report is that Covid-19 has demonstrated our own vulnerability and the vulnerability of the biodiversity we need just to survive.

‘The present context transforms what this document would have looked like if it had been published at the beginning of 2020.

‘What now comes across strongly is when we damage biodiversity we damage ourselves – but there is a way out.’

Countries will now meet and set new targets with a deadline of 2030, which have the explicit goal of ‘living in harmony with nature’ by 2050.

According to the experts compiling this watershed piece of research, climate change will become the biggest driver of nature losses after 2050.

With Covid-19 forcing people to rethink how they choose to live their lives, the report states conserving forests is essential if future pandemics are to be avoided.

This, it says, will prevent diseases from spilling over from their animal hosts and into the ever-expanding human population.

UN Secretary-General Antonio Guterres says the coronavirus outbreak is a ‘shocking demonstration’ of the link between people’s treatment of the natural world and the emergence of human disease.

The warning comes on the heels of conservation charity WWF’s latest Living Planet report, which revealed that global wildlife populations have declined by 68 per cent in less than 50 years.