A nightmarish episode of Black Mirror recently depicted robotic dogs on the hunt for humans. And this terrifying sci-fi scenario is apparently one step closer to reality, following the announcement the US Air Force is now testing similar technology to guard its bases.

The US army’s latest Advanced Battle Management System (ABMS) has been designed to test the latest technology in a bid to retain world supremacy on land, sea and air.

Valuing data as an essential war-fighting resource, one no less vital than jet fuel or satellites, is the key to next-gen warfare

The event has just premiered the Air Force’s quadrupedal dog robots for perimeter defence at the top-secret Nellis Air Force Base.

The cutting-edge canines were designed by Ghost Robotics, with the specific model called Vision 60.

Vision 60 is what Ghost Robotics describes as a Quadrupedal Unmanned Ground Vehicle (Q-UGV). 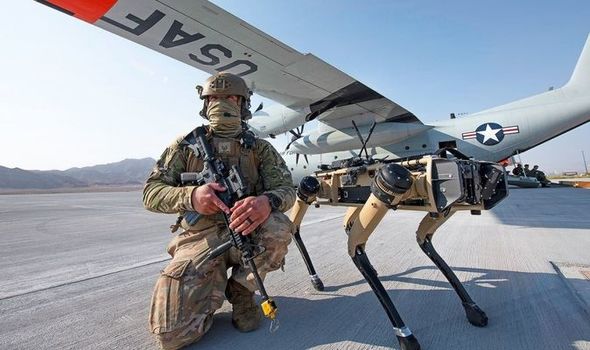 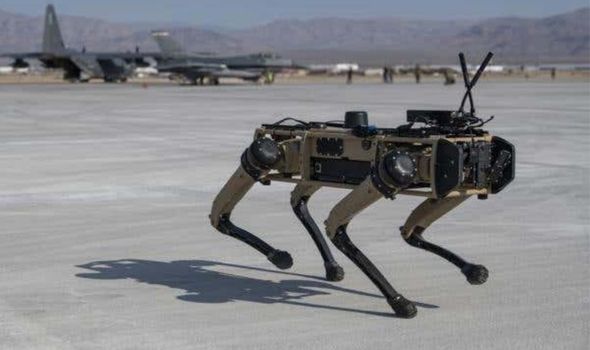 Exact details about the specific technologies tested on the Vision 60 robots used during the ABMS exercise are unsurprisingly scarce, given the sensitive nature of their role.

However, images appear to show various configurations, some with a pair of antennae on its back.

Another photo purports to show a variety of sensors or communications equipment where its head would be expected. 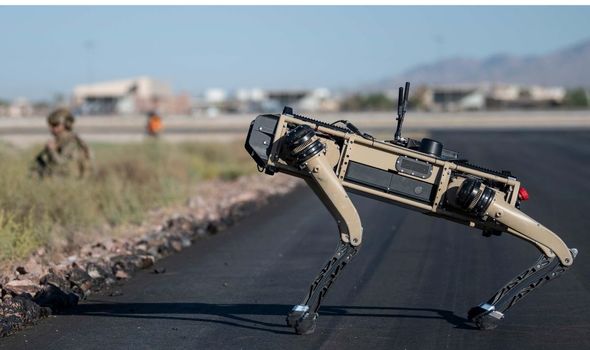 Bandwidth issues reportedly prevented an earlier test of the Vision 60 robots, suggesting the robots are data-linked and can communicate with other systems.

According to the Ghost Robotics website, the Q-UGVs are nearly “unstoppable”, while their modular design means they are able to execute a wide range of missions.

The bots are designed to cope with all-terrain and operate in almost any environment, as well as having reduced mechanical complexity compared to any other legged robots, such as those produced by Boston Dynamics.

And at the same time, this reduces the cost of deploying and maintaining robots in a war zone.

The army intends strategic partners to design solution-specific Q-UGVs for virtually any use-case with their choice of sensors, radios and even size the robots.

Other units and branches have tested unmanned ground vehicles in the past, however, the Vision 60 surpasses anything seen in previous demonstrations. 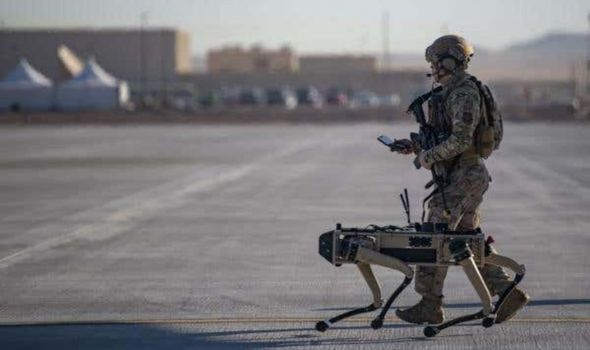 The Vision 60 is smaller, highly modular, and meant to support non-load-bearing tasks.

Industry insiders are now increasingly confident such robotic systems may soon be participating in operations alongside humans.

This would see many mundane, dangerous, or physically demanding tasks offloaded to a soldier’s robotic counterpart.

But more immediately, Vision 60 could play a key role in patrolling perimeters, scouting areas ahead of its human comrades on the battlefield, and investigating objects of interest that could potentially be deadly to a soldier.

Dr Will Roper, Assistant Secretary of the Air Force for acquisition, technology and logistics, said the demonstration was intended to test the ability of ABMS to collect and fuse data instantly across geographically-separated forces.

He said: “Future battlefields will be characterised by information saturation.

“One of the key objectives of this onramp was to present a dizzying array of information for participants to synthesise, just like they would see in a real operation.

“This compelled commanders and operators to trust data analytics and artificial intelligence to understand the battle.

“Valuing data as an essential war-fighting resource, one no less vital than jet fuel or satellites, is the key to next-gen warfare.”