The V&A Museum has snapped up a rare medieval diamond and gold brooch found by an amateur metal detectorist in Northamptonshire.

Justin Owens discovered the flower-shaped brooch — one of only seven known in the world — at a former royal and aristocratic hunting ground that is now a farm.

The intricate brooch will be placed on display today alongside a coronet worn by Queen Victoria and Beyoncé’s Papillon ring.

The V&A has said that it is not able to reveal the monetary value of the brooch — the only one of its kind to be found in the UK — but it has been described as ‘priceless’. 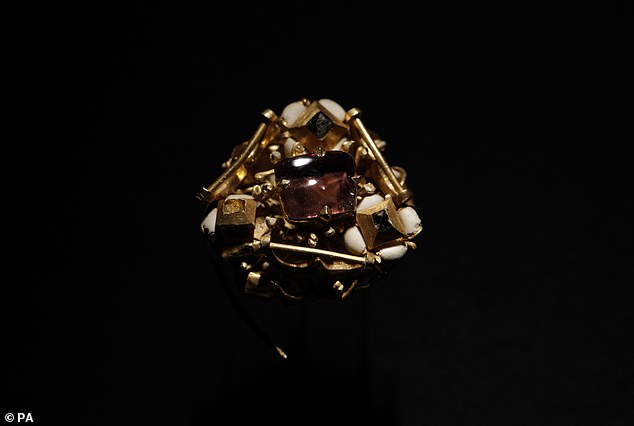 The V&A Museum has snapped up a rare medieval diamond and gold brooch, pictured, which was found by an amateur metal detectorist in Northamptonshire

The brooch — which ‘fills a significant gap’ in the V&A’s collection — is only the second acquisition that the museum has ever made through the National Treasure Act, which requires finders to report treasures and offer to sell them to museums.

Intricately constructed and made up of various layers, the brooch is made of gold with white enamel and a central red spinel — and it would once have also been decorated with pearls, which have since biodegraded.

The jewelled cluster brooch was cleaned with pheasant and ostrich feathers to limit damage as layers of dirt were removed from the ‘priceless’ object.

The piece of jewellery is thought to be around 600 years old, and was found near the village of Brigstock, Northamptonshire, during an organised dig in 2017.

Mr Owens, who was on the dig with his wife Helen, said that he only had to search four inches (10 centimetres) down in the ground to uncover the treasure.

‘Finding the brooch was a complete surprise — I couldn’t believe it,’ said Mr Owens, who has been a hobby metal detectorist for around four years.

‘At best, I’d hope to come across a Roman or medieval hammered coin on a dig, but to find something so rare and valuable as this was a total shock.’

‘When I first found it, it was absolutely caked in mud. I didn’t have high hopes — thinking it might be an old bottle top or something.’

‘But what a discovery! Now I’ve seen it cleaned up by the V&A’s conservators, I can’t believe how exquisite it really is.’

‘The gold work is incredible and the jewels are stunning.’

It’s amazing to think who might have worn this and how it ended up buried underground, undisturbed for so many years.’

‘I’m excited it’s now in the V&A’s collection and on display in its jewellery gallery for everyone to enjoy. I’m looking forward to visiting myself very soon.’ 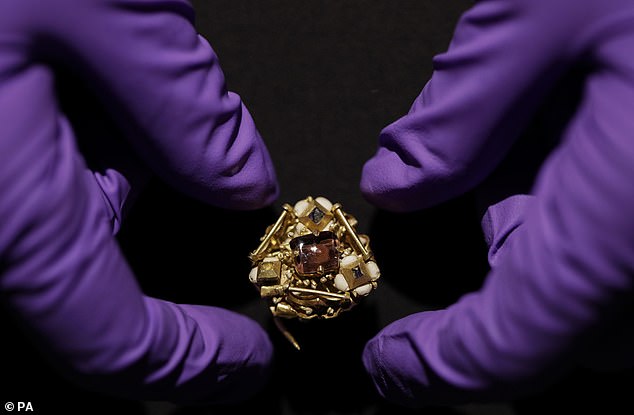 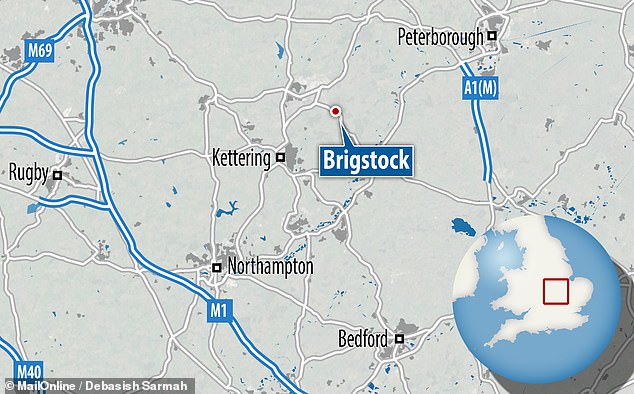 The piece of jewellery is thought to be around 600 years old, and was found near the village of Brigstock, Northamptonshire, during an organised dig in 2017 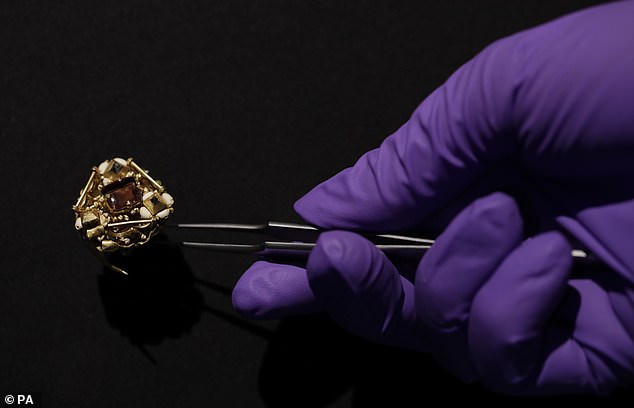 Curators said that the brooch would have been worn with sumptuous textiles and other pieces of jewellery and likely played an important part in the display of status and wealth at the royal court.

Experts believe that the brooch was torn off with great force, and lost, during a hunt, at which time some of the diamonds fell.

The brooch will go on display in the V&A’s William and Judith Bollinger Jewellery Gallery — alongside Queen Victoria’s diamond and sapphire coronet and Beyoncé’s Papillon ring — from March 12, 2020.

Meanwhile, the Museum of London has announced that a brooch which belonged to the women’s suffrage campaigner Millicent Fawcett will go on permanent display for the first time.

The gold and enamel piece was a gift from the suffragists to their president.

HOW DO METAL DETECTORS WORK?

The invention of the metal detector cannot be truly claimed by one person.

It is a combination and amalgamation of several different pieces of technology.

Alexander Graham Bell did fashion a device that was an electromagnetic, metal locating machine.

This was based on a device invented by physicist Heinrich Wilhelm Dove.

Sometime later, an engineer Gerhard Fischer, filed a patent regarding a design.

A metal detector consists of a stabiliser, control box, shaft, and search coil.

It is the two coils that are actually responsible for the detection of metal.

This works to detect and amplify frequencies. This type of technology is known as Very Low Frequency or VLF technology.

When electricity is provided to this transmitter coil, there is a magnetic field created around the coil.

This is the same science behind electromagnets.

When the machine wafts over metal the electrons in the metal – due to its metallic bonding and sea of electrons surrounding a fixed positively charged mass –  are affected by the magnetic field.

The change in the electrons triggers a tiny electrical field in the metal object which alters the frequency of the metal detector.

This indicates  metal is present.

More advanced metal detectors are also able of differentiating between different types of metal ad the frequency change is different and therefore the pitch of the note is altered.