Passengers have travelled in the Virgin Hyperloop for the first time — riding the system’s levitating pod through a vacuum tube at speeds of over 100 mph.

The test run yesterday served as a key safety demonstration for the technology, which Richard Branson’s Virgin group hopes will revolutionise transportation. 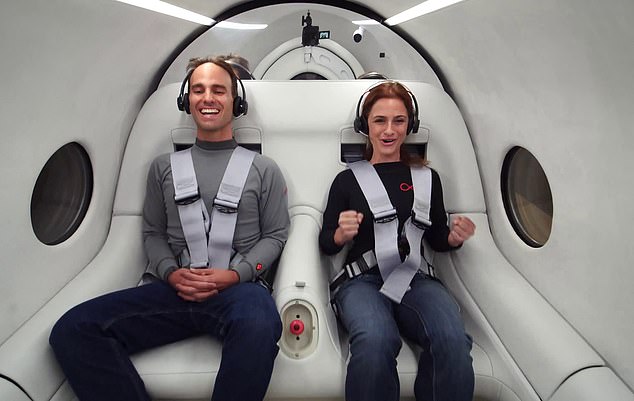 ‘I had the true pleasure of seeing history made before my very eyes,’ said Virgin Hyperloop chair Sultan Ahmed Bin Sulayem.

The firm — which is headquartered in Los Angeles — envisages a future in which their floating pods hurtle around a network of vacuum tubes at speeds reaching 600 miles per hour (966 kilometres per hour) or faster.

The hyperloop concept is capable of achieving such phenomenal speeds — while affording near-silent travel — thanks to how its pods move suspended electromagnetically in airless tubes.

This means that the pods do not experience friction against any kind of rail, nor any air resistance — such which act to limit the speed of conventional trains.

A hyperloop trip between New York and Washington would take just 30 minutes, experts have said — twice as fast as a commercial jet flight and four times faster than a high-speed train.

The test comes a month after Reuters first reported that Virgin Hyperloop picked the U.S. state of West Virginia to host a $500 million certification centre and test track that will serve as a proving ground for its technology.

The company is working toward safety certification by 2025 and commercial operations by 2030, it has said.

Hyperloop is a proposed method of travel that would transport people at roughly 700mph between distant locations.

The concept — first proposed in 1910 — by US engineer Robert Goddard — received renewed interest in 2013 thanks to a white paper by Elon Musk, who at the time said such a system could take passengers the 380 miles (610km) from LA to San Francisco in 30 minutes, half the time it takes a plane to make the same journey.

The loop is essentially a long tube that has had the air removed to create a vacuum. For safety reasons, Hyperloop tunnels need escape hatches in case of fire.

The tube is suspended off the ground to protect against weather and earthquakes.

There are now a number of firms vying to bring the technology to life, including Elon Musk himself, Hyperloop Transportation Technologies, and Virgin Hyperloop One. 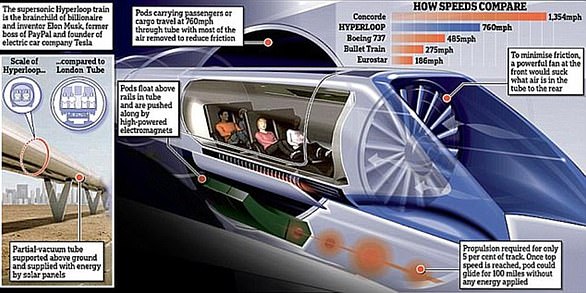 Pictured, a cross-section of a hyperloop train