An asteroid DID wipe out the dinosaurs NOT a volcano, says scientists

Volcanic activity was not to blame for the extinction of the dinosaurs as has been suggested, a new study of ancient gas release has found.

Instead, the dinosaurs were indeed wiped out by an asteroid strike around 66 million years ago, with eruptions possibly helping to shape life after the impact.

Some researchers have claimed that the dinosaurs were already dying out when the city-sized space rock crashed into the coast of Mexico near the town of Chicxulub.

It was suggested that lava spewing out of a volcanic region in India known as the Deccan Traps had released greenhouse gases and raised global temperatures.

However, US researchers found that most of the gas release occurred long before the mass extinction, which is known as Cretaceous-Paleogene (K–Pg) event.

Given this, the environmental impacts of the volcanism likely did not contribute to the death of the dinosaurs, the international team has concluded. 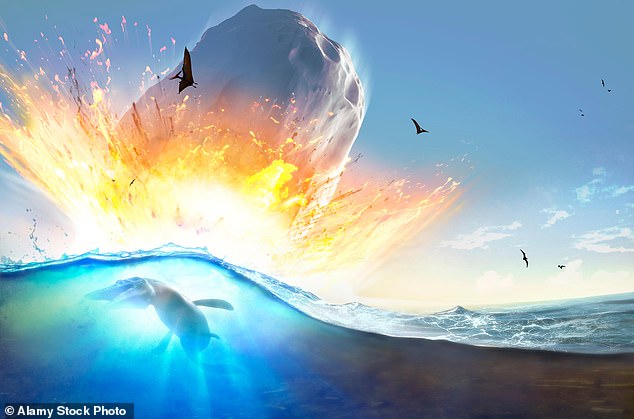 Volcanic activity was not to blame for the extinction of the dinosaurs as has been suggested, a new study of ancient gas release has found

‘A lot of people have speculated volcanoes mattered to [the] K–Pg, and we’re saying, “No, they didn’t”,’ said geologist Pincelli Hull of Yale University in Connecticut.

It is commonly accepted by the scientific community that the extinction at the end of the Cretaceous happened after a six-mile-wide asteroid slammed into the Earth.

At least 75 per cent of all species on Earth at the time vanished — including the dinosaurs — a mass dying that is said to have coincided with the volcanic activity.

‘Volcanoes can drive mass extinctions because they release lots of gases, like sulphur and carbon dioxide, that can alter the climate and acidify the world,’ Dr Hull said.

‘But recent work has focused on the timing of lava eruption rather than gas release.’

Instead, Dr Hull and colleagues compared global temperature changes and the record of carbon chemicals from marine fossils with models of the climatic effect of massive-scale carbon dioxide release.

They found that at least 50 per cent of the gas release occurred well before the asteroid impact — suggesting that the latter had to be the sole driver of the extinction. 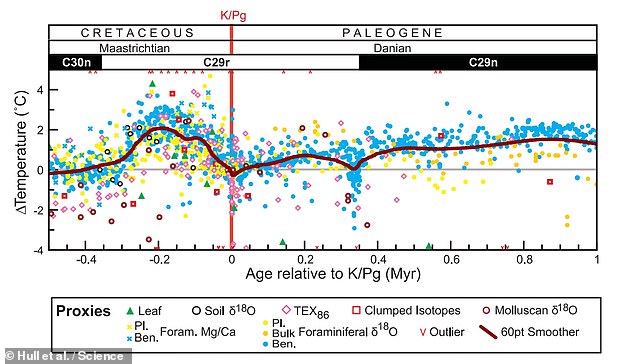 ‘Volcanic activity in the late Cretaceous caused a gradual global warming event of about two degrees, but not mass extinction,’ said paper co-author and Yale geochemist Michael Henehan, who compiled the temperature records.

‘A number of species moved toward the North and South poles, but moved back well before the asteroid impact,’ he added.

Recent work on the Deccan Traps in west-central India — the largest volcanic feature on the face of the Earth — have also pointed to massive eruptions having occurred in the immediate aftermath of the K–Pg mass extinction.

These results have puzzled scientists because there is no warming event to match this activity.

However, the new study suggests an answer to this puzzle, as well. 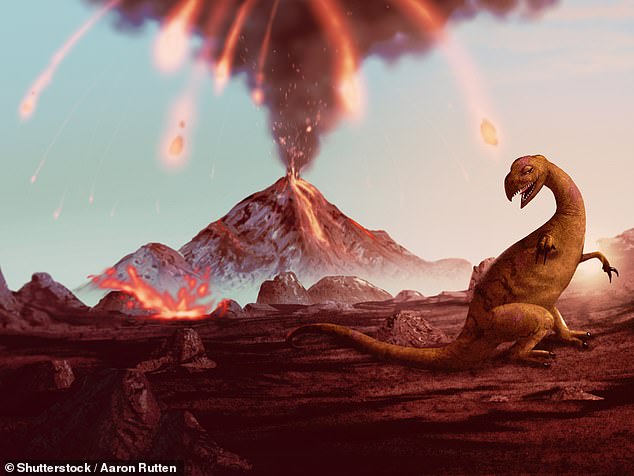 It was suggested that lava spewing out of a volcanic region in India known as the Deccan Traps had released greenhouse gases and raised global temperatures. However, US researchers found that most of the gas release occurred long before the K-Pg mass extinction

‘The K–Pg extinction was a mass extinction and this profoundly altered the global carbon cycle,’ added paper author and Yale geochemist Donald Penman.

‘Our results show these changes would allow the ocean to absorb an enormous amount of CO2 on long time scales — perhaps hiding the warming effects of volcanism in the aftermath of the event.’

However, the researchers said that the volcanic gases may have played an important role in shaping the rise of different species after the extinction, rather than driving the initial event.

WHAT KILLED THE DINOSAURS?

Around 65 million years ago non-avian dinosaurs were wiped out and more than half the world’s species were obliterated.

This mass extinction paved the way for the rise of mammals and the appearance of humans.

The Chicxulub asteroid is often cited as a potential cause of the Cretaceous-Paleogene extinction event.

The asteroid slammed into a shallow sea in what is now the Gulf of Mexico.

The collision released a huge dust and soot cloud that triggered global climate change, wiping out 75 per cent of all animal and plan species.

Researchers claim that the soot necessary for such a global catastrophe could only have come from a direct impact on rocks in shallow water around Mexico, which are especially rich in hydrocarbons.

Within 10 hours of the impact, a massive tsunami waved ripped through the Gulf coast, experts believe.

Around 65 million years ago non-avian dinosaurs were wiped out and more than half the world’s species were obliterated. The Chicxulub asteroid is often cited as a potential cause of the Cretaceous-Paleogene extinction event (stock image)

This caused earthquakes and landslides in areas as far as Argentina.

But while the waves and eruptions were  The creatures living at the time were not just suffering from the waves – the heat was much worse.

While investigating the event researchers found small particles of rock and other debris that was shot into the air when the asteroid crashed.

Called spherules, these small particles covered the planet with a thick layer of soot.

Experts explain that losing the light from the sun caused a complete collapse in the aquatic system.

This is because the phytoplankton base of almost all aquatic food chains would have been eliminated.

It’s believed that the more than 180 million years of evolution that brought the world to the Cretaceous point was destroyed in less than the lifetime of a Tyrannosaurus rex, which is about 20 to 30 years.