When it comes to the hunt, giant hornets in the genus Vespa do not mess around.

These matchbox-size terrors — a group that includes the infamous “murder hornets” — will invade honeybee hives, brutally behead the residents and carry the mangled carcasses back to their young. A small cavalry of the hangry hornets can exterminate a colony of bees in hours.

But even the mightiest of monsters can be stopped. And a good way for honeybees to fend off Public Insect Enemy No. 1 might be to serve them a helping of No. 2.

To ward off giant hornet attacks, honeybees in Vietnam will adorn the entrances to their nests with other animals’ feces, a defensive behavior called fecal spotting, according to a paper published Wednesday in the journal PLoS One. The odious ornamentation seems to repel the wasps — or at least seriously wig them out — and offers the intriguing possibility that honeybees might use stool as a type of rudimentary tool.

Decorating one’s home with dung might sound indecorous, especially for the docile bees that so many people associate with candy. “We think of bees visiting pretty flowers and collecting sweet nectar,” said Rachael Bonoan, a bee biologist at Providence College who wasn’t involved in the study. “This is the complete antithesis to that.”

But the scat-based strategy appears to capitalize on a relatable trend: Most creatures aren’t keen on muddying their meals with someone else’s waste.

A team of researchers led by Heather Mattila, who studies bees at Wellesley College in Massachusetts, was first alerted to the baffling behavior nearly a decade ago while doing field work in Vietnam, where honey bees are terrorized by Vespa soror hornets, a close sister species of the Asian giant hornet, Vespa mandarinia, that frightened people in the Pacific Northwest earlier this year. 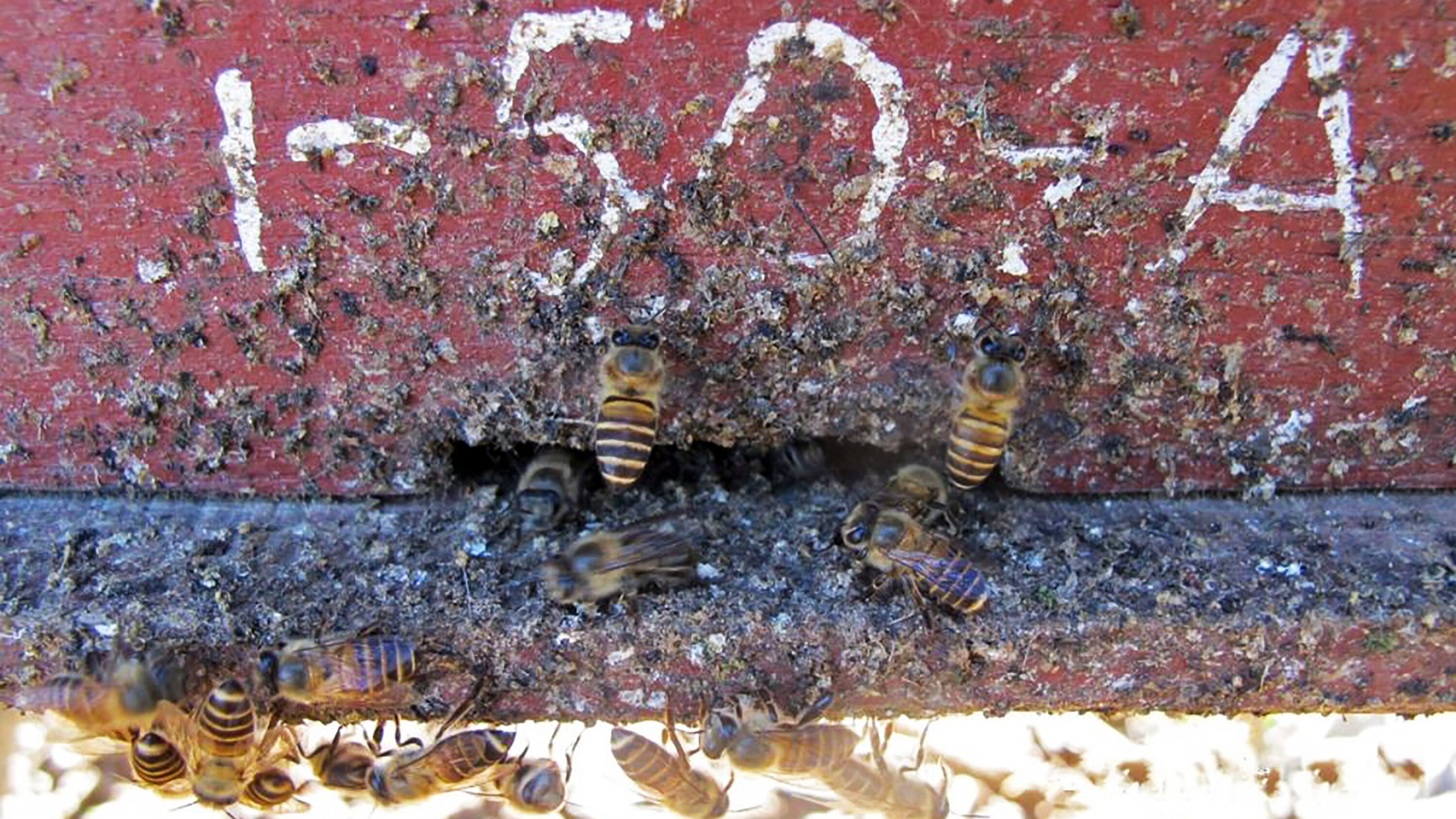 Local beekeepers had spied a smattering of grayish-brown gunk around the entrances to honey bee colonies, which the insects seemed to decorate in a frenzy in the wake of hornet assaults. No one was certain what the substance was, but “it didn’t smell good,” Dr. Mattila said. One keeper noticed bees buzzing around some water buffalo droppings, and wondered if it was the source of the stench.

Dr. Mattila and her colleagues started scouting local farms, squatting in pig pens and chicken coops. In time, Dr. Mattila spotted a honeybee alighting on a jumble of chicken scat. The bee tugged diligently at a mote of the muck with her mouthparts, then carried it away. “I remember running back to the apiary, screaming, ‘It’s true, it’s finally true!’” Dr. Mattila said.

Hours of video footage proved the insect’s act wasn’t an anomaly. When the researchers placed buffets of animal dung near several apiaries, bees harvested clumps of it, dabbing their nests in carefully mounded lumps, each roughly the size of a sesame or poppy seed. Spotting seemed to spike in the days after hornets attacked. At their most bedecked, the colony entrances looked “like an everything bagel,” Dr. Mattila said.

Honeybees are typically fastidious creatures, keeping their households spotlessly clean. “Bees don’t even poop in their own hives,” Dr. Bonoan said. Hauling around another animal’s feces, she added, can carry risks of disease or even death.

But hornets spent less time lurking around the entrances of nests freckled with feces, and were less likely to team up to invade colonies.

It’s not yet clear how big an impact spotting has on survival. Honeybees have an array of tactics they deploy when danger is afoot, including a devious and sometimes self-sacrificial move called balling, in which a phalanx of worker bees swarms a hornet to suffocate or overheat it. In the long run, dung might not make a huge difference.

The researchers also don’t know how the flecks of feces are dissuading the hornets. One possibility is that they’re avoiding the noxious plant compounds that linger in some excrement. Dr. Mattila noted that the bees seemed to go especially bonkers for chicken droppings.

And, of course, “poop is really smelly,” Dr. Bonoan said. Feces might act like a reverse deodorant, overlaying its foul stench atop the alluring waxy, floral scent that typically wafts from more pristine nests.

Because spotting involves deliberate manipulation of manure, Dr. Mattila’s team argued that it might qualify as tool use. Dr. Bonoan said she wasn’t yet sold on the idea, noting that the feces might not be altered enough along the way.

But there’s no guarantee that all giant hornets will shy away from dung, said Margarita López-Uribe, an entomologist at Pennsylvania State University who wasn’t involved in the study. Beekeepers also shouldn’t rush out to spray their hives with feces, which could contaminate the valuable honey within.

Bees might benefit from fecal spotting, Dr. Bonoan said. But “if you’re a human, don’t use poop to try and protect yourself from a murder hornet.”