Home » Science » Why Are Pandas Covering Themselves With Horse Manure?

Last Wednesday, Aleah Bowie, a wildlife ecologist and animal behavior expert, received an interview request by email that made her do a serious double take.

Attached to the message was a peer-reviewed scientific paper by a team of Chinese scientists who had dedicated more than a decade to investigating why giant pandas smear their bodies with mounds and mounds of horse manure.

But it really is something that the charismatic mammals will do in the Qinling Mountains in China. The bears sniff out fresh horse droppings, lay themselves down and roll their bulky bodies in the muck, using their paws to really make sure they are covered from the tip of their fuzzy ears to the bottom of their tails, until their black and white fur is another shade entirely.

The behavior may help the pandas tolerate cold temperatures because a compound in horse dung, the researchers propose in the paper published Monday in the Proceedings of the National Academy of Sciences, may short-circuit a cellular thermostat that makes pandas sensitive to chill.

Horses and pandas aren’t necessarily natural partners, as their habitats don’t often overlap. But a rich history of domestication by humans has made horses a relatively common fixture in some of China’s forested wilds, where pandas live. Where the horses go, so go their droppings.

A team of researchers led by Fuwen Wei, a biologist at the Chinese Academy of Sciences, first noticed a panda luxuriating in a pile of horse excrement in 2007. Unsure of whether it was a fluke, they spent years tracking the bears with dozens of camera traps, eventually convincing themselves that the behavior was “definitely frequent and typical,” Dr. Wei wrote in an email. Between July 2016 and June 2017 alone, 38 instances were documented, each typically characterized by a series of calculated steps.

Drawn to the irresistible stink of the droppings — the fresher the better — the bears would first take a careful whiff, then initiate a gentle rubbing with a cheek. They would next immerse themselves in an unbridled full-body tussle in the dung, before meticulously slathering themselves with their paws to ensure all their exposed bits were covered.

Plenty of other animals have been recorded fondling feces for a variety of reasons, whether using them to mark their territories or snarfing them as snacks. But it’s a bit unusual to pilfer the poop of another species; it’s even weirder to lather it up on the regular.

“There are all kinds of reasons you want to stay away from feces,” Dr. Bowie said. She added that if they really are doing this, there must be “a clear fitness benefit.”

The researchers propose that this filthy act is all about tolerating low temperatures.

Field observations revealed that wild bears seemed to smear themselves with scat on a schedule, preferentially engaging with excrement during the cooler fall and winter months. 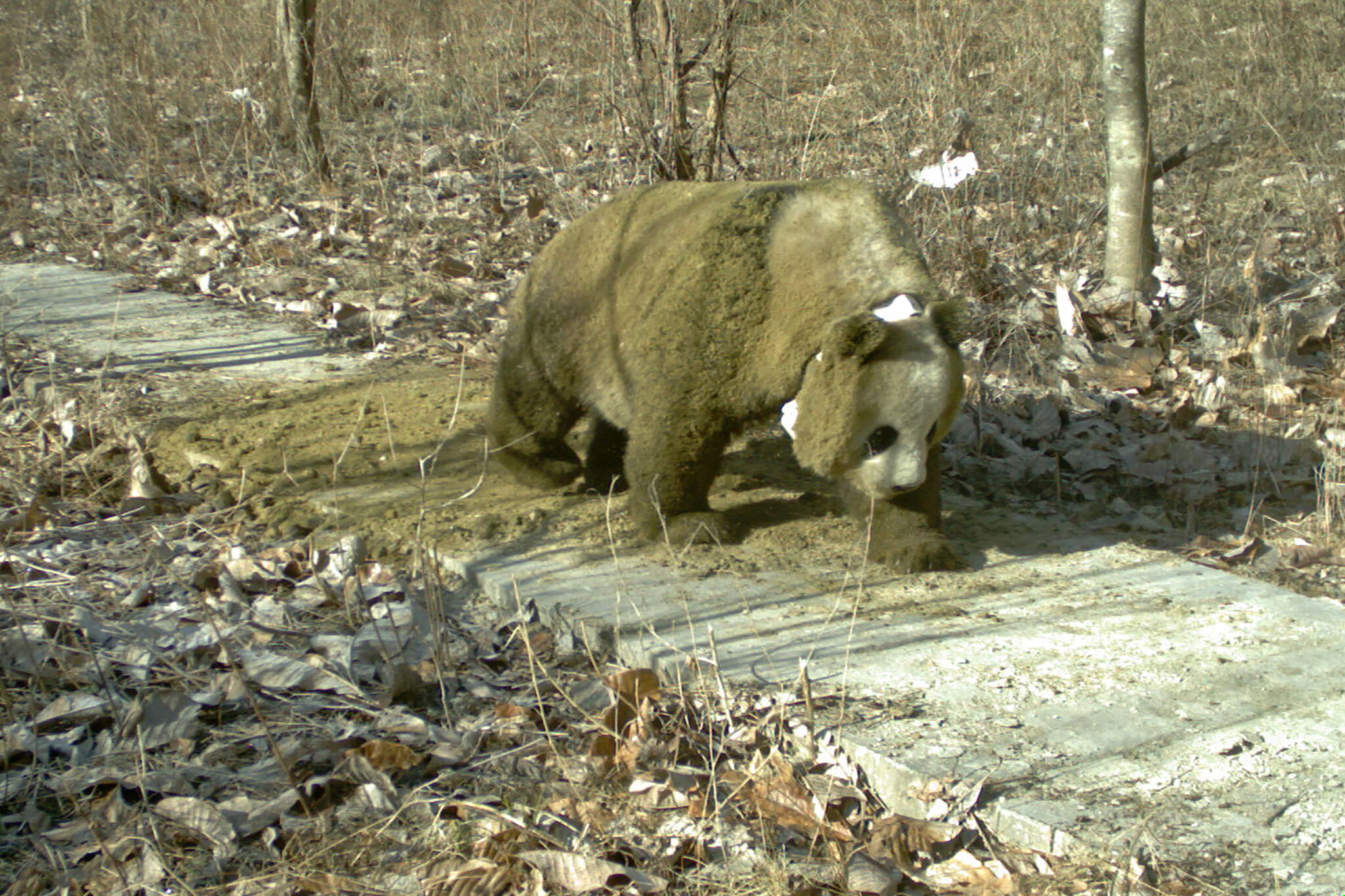 A chemical analysis of the dung revealed two short-lived compounds called sesquiterpenes, which are commonly found in plants. When applied onto the paws and fur of laboratory mice, the sesquiterpenes rendered the rodents indifferent to frigid temperatures or a chemically induced chill. Further lab experiments showed the sesquiterpenes were gumming up a type of cold-sensing protein that adorns the cells of pandas and many other animals, including humans.

In theory, these chemicals, when applied topically like a salve, might temporarily inure pandas to the cold, Dr. Wei said.

Bill McShea, a wildlife ecologist at the Smithsonian Conservation Biology Institute who wasn’t involved in the study, said, “I never would’ve thought of that in a million years.”

“I would look at that behavior and say, ‘Wow, that’s weird,’” he said. “They took it to the next level.”

It’s still unclear how ubiquitous this behavior is among pandas, and whether other animals might also swaddle themselves in scat for warmth. Also mysterious is the particular allure of horse manure.

And if the idea pans out, it would be a bit baffling, Dr. McShea said. Pandas, like other bears, have very thick coats of fur. “They are adapted for cold weather already,” he said.

Dr. Bowie was also hesitant to embrace the waste-as-warmth hypothesis. “How much of a benefit could this provide as opposed to finding a cave where there’s no wind?” she said.

Isaac Chiu, a neuroscientist at Harvard University who wasn’t involved in the study, praised the team’s molecular work, but added that the sesquiterpenes the researchers found in horse manure can do far more than blunt an animal’s ability to sense the cold. Other research has found that these same chemicals might also tamp down inflammation and perception of pain.

Still, it’s possible that a patina of poo is just what the bears need to feel cozy.

“Maybe it’s like Vicks VapoRub, or maybe like Tiger Balm,” Dr. McShea said, describing the tingly feeling they cause.

“I don’t know, though,” he added. “I’ve never rolled in horse manure.”