Home » Science » Why children are less affected by Covid-19

Children are less at risk of developing severe Covid symptoms and dying from the disease due to a host of differences between the bodies and immune systems of youngsters and adults, a study shows.

Australian researchers have identified several specific physiological differences which may explain why Covid-19 is rarely severe or fatal in children.

These include strong, undamaged cells in their blood vessels which prevent inflammation and clotting; elevated levels of vitamin D; an immune system that is both fast acting and well-oiled; and fewer ACE2 receptors, which the coronavirus uses to infect cells.

Children are demonstrably less affected by coronavirus infection, making up only a tiny proportion of cases, hospital admissions and deaths (stock)

However, society’s youngest are demonstrably less affected by coronavirus infection, making up only a tiny proportion of cases, hospital admissions and deaths.

A recent study from the US looked at hospital admissions of children at seven different hospitals and found just just four per cent of children test positive for the virus.

The research looked at tests of more than 135,000 children who went to hospital for various reasons before September 8.

But why this is the case has thus far remained a mystery, with scientists and doctors trying to get to the bottom of the mystery.

‘Most children with COVID-19 have no or only mild symptoms, most commonly fever, cough, sore throat and changes in sense of smell or taste,’ co-author of the latest study, Professor Nigel Curtis, said.

‘Even children with the usual risk factors for severe infections, such as immunosuppression, were not at high risk of severe Covid-19 disease.’

Experts have long speculated the reason likely lies in the immune systems of youngsters performing and reacting differently to those of adults, benefitting children and preventing severe symptoms and death.

The study, published in the Archives of Disease in Childhood, proves this to be correct and also reveals more details.

Melbourne-based researchers reviewed all currently available research on the topic and analysed the results to unravel the reasons for age-related differences in Covid-19 severity and symptoms. 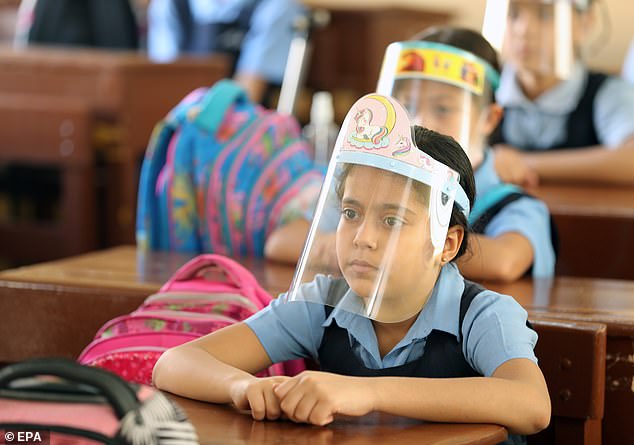 Researchers found children have strong, undamaged cells in their blood vessels; elevated levels of vitamin D; and an immune system that is both fast acting and well-oiled

One key finding was that in many adults with severe Covid-19, so-called endothelial cells which line the heart and blood vessels are already damaged.

Patients with already damaged endothelial cells are known to be at higher risk of blood clots, strokes and heart attacks. SARS-CoV-2, the virus which causes Covid-19, also infects these cells and causes inflammation.

Adults also have a ‘higher density and increased affinity’ of ACE2, the receptor on the surface of cells which the virus hijacks and uses to infiltrate cells, the researchers write.

ACE2 becomes more prevalent as children grow up, which may explain why older children are more likely to develop symptoms than toddlers.

The Government will deliver doses of the ‘sunshine vitamin’ to all care home residents as well as people classified as ‘clinically extremely vulnerable’.

Deliveries will be free of charge, starting in January, providing four months’ worth of supplements to last 2.7million people through the winter months.

The supplements support general health, in particular bone and muscle health, but around one in five Britons have Vitamin D deficiencies.

There is some evidence suggesting that it may help people fight coronavirus, and the link between the two is still being researched with larger-scale trials needed.

Another contributing factor to the relative immunity of children is the fact they often have been recently vaccinated for other diseases, including with MMR.

This can confer ‘off-target’ protective benefits which effectively help train the immune system and keep it firing on all cylinders.

Children are also more likely to be infected with other pathogens, catching colds and picking up germs in the playground. This can help build a strong natural immune system in a process dubbed ‘trained immunity’, the researchers say.

Dr Petra Zimmermann from the University of Fribourg, who co-authored the study, adds: ‘Children have a stronger innate immune response, which is the first-line defence against Covid-19.’

Dr Zimmermann said children have a different gut microbiota; higher levels of vitamin D and melatonin; and pre-existing immunity to coronaviruses, such as from the common cold.

‘The overlap between risk factors for severe COVID-19 and vitamin D deficiency, including obesity, chronic kidney disease and being of black or Asian origin, suggests that vitamin D supplementation may play a role in helping prevent or treat COVID-19,’ she said.

‘In many countries, vitamin D is routinely supplemented in infants younger than one year of age and in some countries even up to the age of three years.’

Coronavirus infects only FOUR per cent of children and just 0.15 per cent of youngsters hospitalised with Covid-19 die from the virus, study finds

Children are far less likely to suffer from Covid-19, a new study has confirmed, with just four per cent of children admitted to hospital testing positive for the virus.

Why children are less affected by the coronavirus than adults remains unknown, but it is believed to be down to the way their immune system reacts after infection.

The research looked at the test results of more than 135,000 children admitted to seven US hospitals before September 8.

It revealed only 5,374 (4.0 per cent) of patients tested positive and, of this small percentage, only 359 (6.7 per cent) were hospitalised, with 99 needing intensive care.

The study comes from doctors at the Children’s Hospital of Philadelphia who looked at electronic medical records from seven children’s hospitals in the US.

The average age of the patients was almost nine years old, but they ranged from less than one year old to legal adults who were older than 18.

A history of certain factors increased the likelihood of a positive test, the data shows.

For example, people with a history of heart issues were 18 per cent more likely to test positive and a history of mental health was linked to a 20 per cent increase in risk.

However, a history of asthma or other respiratory conditions was not associated with increased positive test results.