Did woolly mammoths go extinct because of OSTEOPOROSIS? 16,200-year-old vertebra gauged by a spear hints bone weakening may have been a key factor in the death of the species

Weak bones may have led to the extinction of one of the most iconic prehistoric creatures, new research into a 16,200-year-old woolly mammoth vertebra suggests.

The unique fragment, unearthed in western Siberia, has an oval-shaped hole bored by a spear – the clearest proof that our ancestors hunted the hairy animals.

Some believe excessive hunting from early humans may have contributed to their extinction, but analysis of the vertebra has also revealed evidence of osteoporosis.

This condition weakens bones, making them fragile and more likely to break, and experts now suspect it may have been a key factor in the species’ downfall. 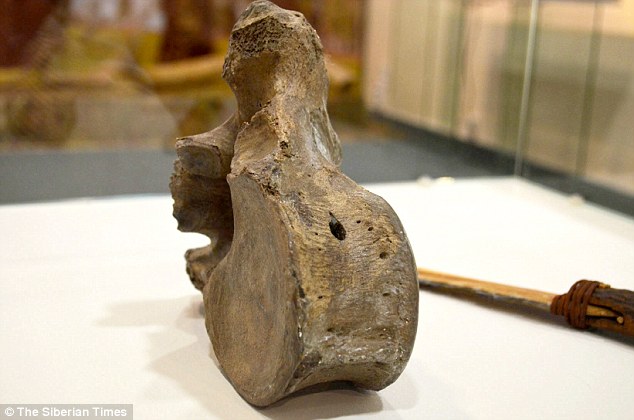 Weak bones may have led to the extinction of one of the most iconic prehistoric creatures, research into a 16,200 year old woolly mammoths vertebra suggests. The unique fragment, uncovered in western Siberia, has an oval-shaped hole made by a spear (pictured)

According to analysis of the 16,200-year-old woolly mammoth bone, scientists believe the killer blow to the animal was a piercing of the vertebra.

The wound is believed to have been caused by the sharp light-green quartzite tip of a spear which experts say was thrown at ‘great force’.

Remarkably, traces of the quartzite remain buried in the bone, which was preserved in the Siberian cold.

A reenactment video made by the Khanty-Mansiysk Museum of Nature and Man imagines the scene as the wounded mammoth is attacked by Upper Paleolithic hunters.

They now hope to unlock more secrets from the mammoth using the same methods as part of an international investigation. 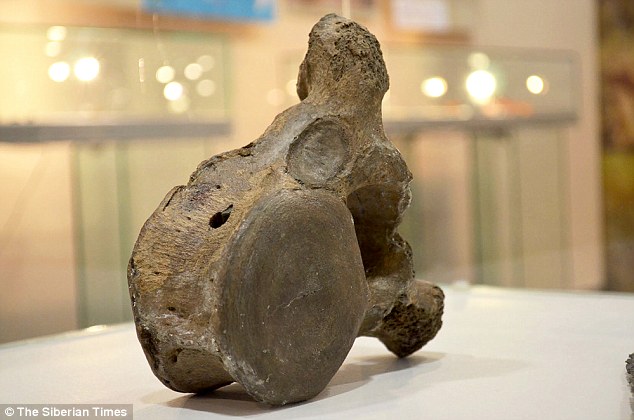 Experts believe the hole is the clearest proof that our ancestors hunted the hairy beasts, with some  believing this may have contributed to their extinction 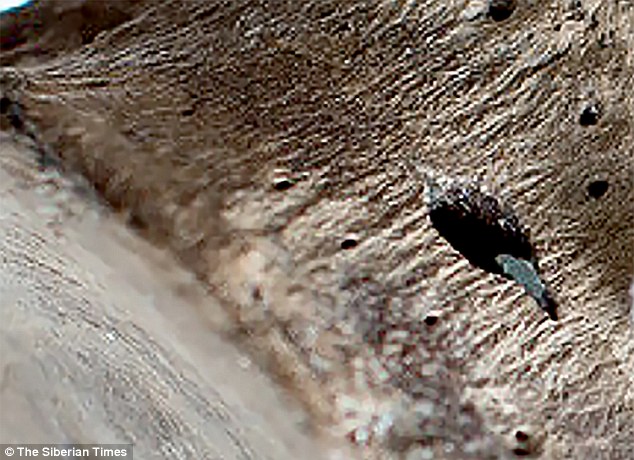 Analysis of the wound also revealed evidence of osteoporosis. This condition weakens bones, making them fragile and more likely to break, and scientists suspect it could have been a key factor in the species’ downfall

‘This is a very precious sample, which we hope will give us new information on the ecology of woolly mammoths during the time of their mass extinction,’ said Dr Sergey Leshchinsky, of Tomsk State University.

A Russian-Polish team will extract DNA and carry out genetic analysis of the bone, according to reports in the Siberian Times.

Experts will carry out synchrotron studies to study the micro-architecture of bone tissue and the wound area without destroying the sample.

Dr Leshchinsky said: ‘We have previously carried similar studies, but with smaller resolution and found that the mammoth suffered from osteoporosis.

‘This time hopefully the level of equipment will allow us to go much further.’

The discovery was made at the Lugovskoe ‘mammoth graveyard’ in 2002.

But the bone and its spear hole – 23.5 mm (around one inch) deep and 0.3 to 0.4 inches (seven to ten millimetres) wide – is now coming under closer scrutiny. 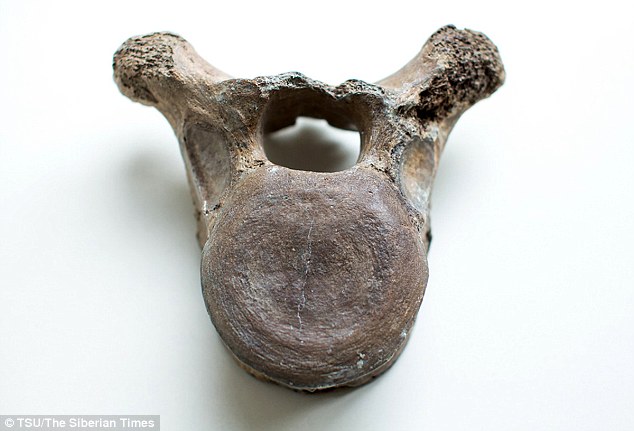 The killer blow was a piercing of the vertebra, a wound caused by the sharp light-green quartzite tip of a spear which was thrown at ‘great force’ 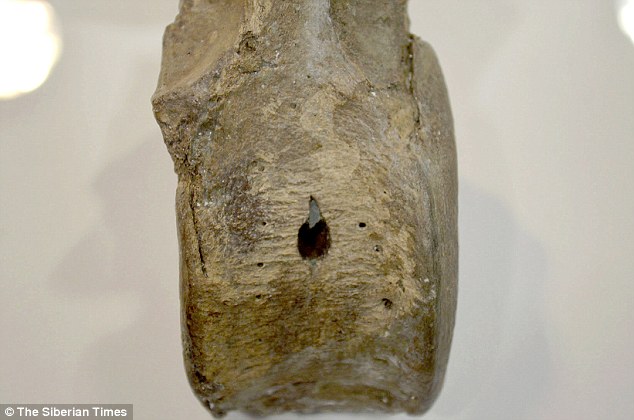 Its spear hole – 23.5 mm (around one inch) deep and 0.3 to 0.4 inches (seven to ten millimetres) wide – is now coming under closer scrutiny. Remarkably traces of the quartzite remain in the bone, which was preserved in the Siberian cold 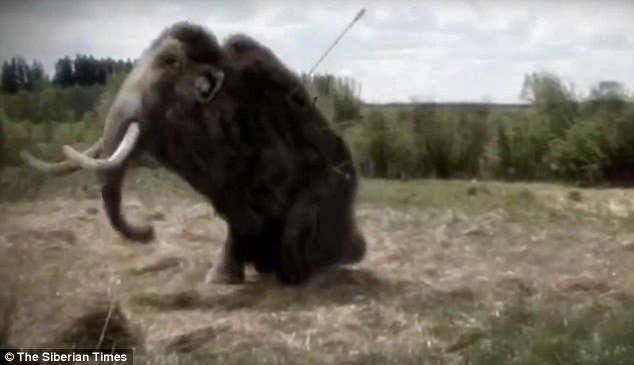 Scientist Anton Rezvy, from the museum, said: ‘There is much proof that ancient man used the mammoth for food, for example, there are traces of mammoth found on an ancient knife.

‘But direct proof, like this, that man was actually hunting the mammoth, can be counted on the fingers of one hand.

‘There is a dispute about how much humans influenced the extinction of the mammoth.

‘Were mammoths actually hunted down by humans or did the the animals become extinct because of cold?

‘Some scientists use our find to prove the theory that man was the main reason for the mammoth’s extinction.

‘But it is hard to make such an assumption is this particular case because we have to take into consideration that the mammoth remains were found in a muddy area where many of them were getting stuck.

‘So even if the humans were hunting them here, it was more killing animals that were already stuck in the mud and had no way to escape.’

Dr Leshchinsky’s theory is that osteoporosis was a key factor in the extinction of the species.

WHAT DO WE KNOW ABOUT THE WOOLLY MAMMOTH?

The woolly mammoth roamed the icy tundra of Europe and North America for 140,000 years, disappearing at the end of the Pleistocene period, 10,000 years ago.

They are one of the best understood prehistoric animals known to science because their remains are often not fossilised but frozen and preserved.

Males were around 12 feet (3.5m) tall, while the females were slightly smaller.

Their trunks had ‘two fingers’ at the end to help them pluck grass, twigs and other vegetation.

They get their name from the Russian ‘mammut’, or earth mole, as it was believed the animals lived underground and died on contact with light – explaining why they were always found dead and half-buried.

Their bones were once believed to have belonged to extinct races of giants.

Woolly mammoths and modern-day elephants are closely related, sharing 99.4 per cent of their genes.

The two species took separate evolutionary paths six million years ago, at about the same time humans and chimpanzees went their own way.

Woolly mammoths co-existed with early humans, who hunted them for food and used their bones and tusks for making weapons and art.