The world’s fastest-spinning object that can hit three hundred billion revolutions-per-minute (RPM) powered only by the force of light has been developed by scientists.

The tiny dumbbell-shaped nanoparticle is spun at considerable speeds by two different light forces hitting it in a vacuum chamber.

Researchers at Purdue University developed the whirling object to try and beat their own earlier record from July 2018, when they made a similar object revolve at 60 billion RPM.

By comparison, dentist drills are known to reach 500,000 revolutions-per-minute – 600,000 times slower than this new nano-scale rotor.

The research team, led by Tongcang Li say that beyond setting a record, they hope to use the findings to measure quantum effects such as friction in a vacuum. 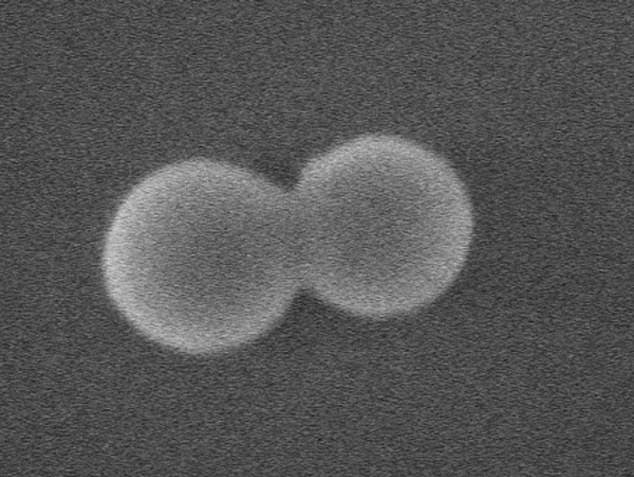 Researchers at Purdue University developed the whirling object that is suspended in a vacuum , as demonstrated in the animation at the top and shown under a microscope in the second image, to try and beat their own earlier record of 60 billion RPM from July 2018

To make the nanoparticle spin, the team shone two lasers at it – one to hold it in place and another to start it spinning.

When the light from the laser beam strikes any object, it exerts a degree of force on it – known as radiation pressure.

Usually this force is too weak to have any impact. However in a vacuum – where there’s very little friction – it can cause objects to spin at record-breaking speeds.

It’s a force a million times weaker than the pressure exerted by gravity on humans – but it still exists and, in space, can even propel satellites, using light sails.

‘In the 1600s Johannes Kepler saw that the tails of comets always pointed away from the sun because of radiation pressure.

‘We use the same thing, but with concentrated lasers, to levitate and rotate the nanoparticles.’ 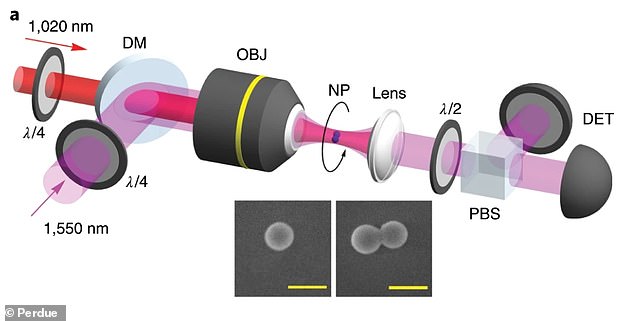 To make the nanoparticle spin, the team shone two lasers at it – one to hold it in place and another to start it spinning

In addition to the new record in terms of rotation speed, the nanoparticles can measure torque at levels 600–700 times more sensitive than any device before.

Previous research has suggested that even objects in a vacuum being levitated by lasers experience a very miniscule level of friction.

They found that this is caused by virtual photons, a quantum fluctuation within the vacuum, something Professor Li wants to study further.

The nano-torque detector could also be used to measure related effects, including the Casmir effect and nanoscale magnetism, which could eventually allow engineers to develop and control nanoelectronic devices.

The research was published in the journal Nature Nanotechnology.

Nanoparticles are tiny – the microscopic substances are between one and 100 nanometres in size.

They are both natural and created thanks to human activities and have unique characteristics not seen in larger materials.

The properties of nanoparticlee substances are different from those of the same substance at a much higher quantity.

This difference makes them interesting to science – they create a bridge between bulk materials and molecular structures such as atoms.

Manufactured nanoparticles have been used in medicine, engineering, environmental science and pure research.