The unmanned machine carries out its own patrol route through the corridors and rooms of the building it is monitoring, landing itself on a wireless charging pad whenever it runs low on power.

A surveillance camera attached to the quadrocopter records and streams real-time footage and alerts human guards to any potential threats.

The engineers behind the system claim building owners could replace hundreds of static cameras with a few drones, saving costs while keeping their property secure. 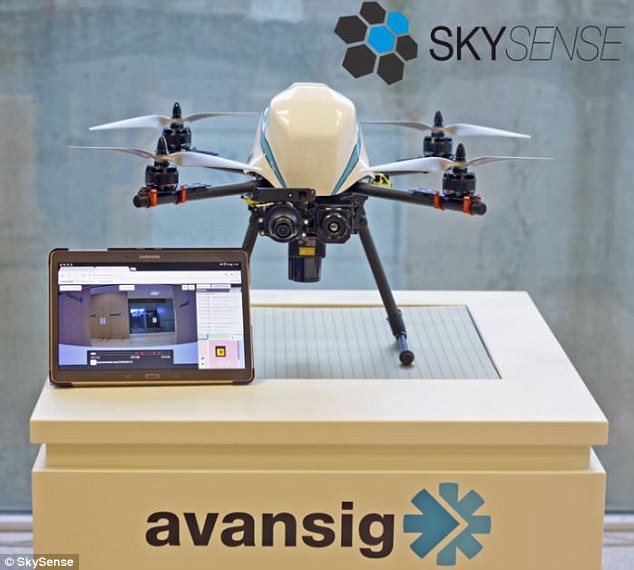 ‘You don’t need to install so many cameras, which reduces the cost.’

While the Spanish firm provided the drone technology for the prototype system, Skysense supplied its latest wireless drone charging stations.

The company says the technology eliminates the need to remove a battery, or manually charge the drone each time its power runs out.

This makes the system largely independent of humans as there is no need to interfere with its batteries every couple of hours. 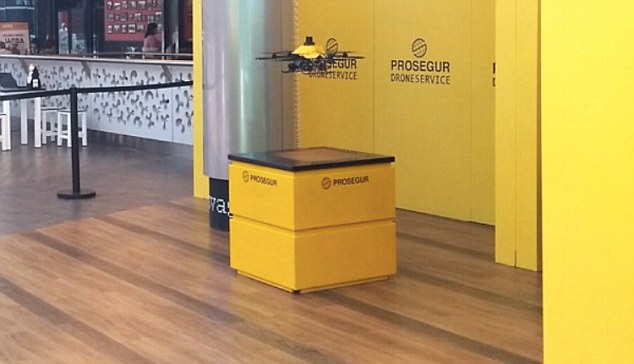 ‘We realised we needed a charging partner at the beginning of the project because we want the drone to work completely unattended,’ Mr Trillo said.

He described the wireless system, which allows the drone to land on the charging dock whenever it needs to and then autonomously resume its surveillance patrols, as ‘reliable and simple’.

While on patrol, the drone sends live footage back to a touch-screen tablet, which Skysense describes as a ‘security central station’. 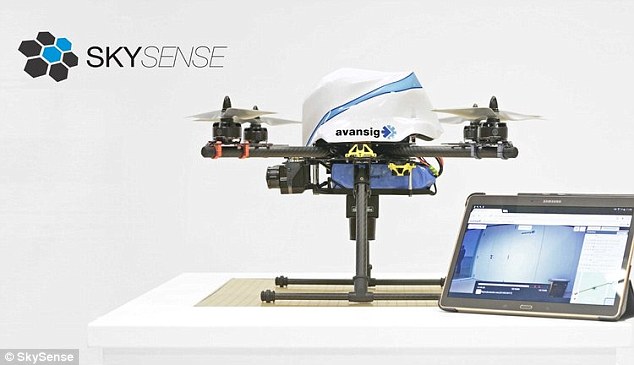 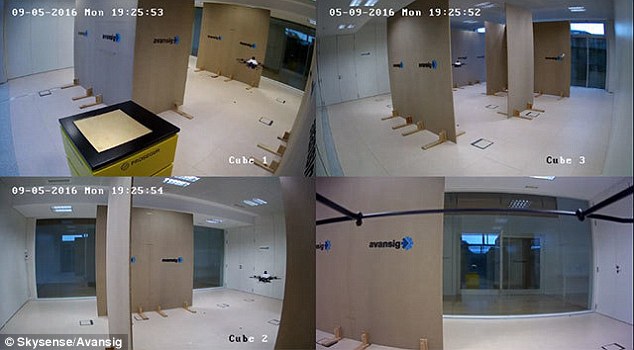 A video of a prototype drone shows it threading through a tight assault course designed to replicate the layout of an office space. Pictured bottom right is the drone’s point of view during the run, while the remaining three panels are external camera views of the course

When a potential security threat or breach is detected, it sends alerts to the station, prompting an investigation by a human security guard.

A video of a prototype drone shows it threading through a tight assault course designed to replicate the layout of an office space.

The vehicle takes off from its charging pad and circles the room several times before landing back where it started.

Prosegur has not yet announced when it plans to use the system in buildings it provides security for, and did not immediately respond to a request for comment.

Experts suggest that an army of autonomous drones or robots could be used to fix Britain’s pothole-spattered roadways.

The machines would identify cracks along highways and quickly fill them in before a pothole appears.

The robots could even work anti-social hours, completing repairs in the dead of night when there is little to no traffic around.

Repairs could take just a minute and so would only hold up traffic for short periods, researchers at University College London, who are working on technologies for self-repairing cities, claim.

Leeds City Council is already working with a team of engineers and designers to pioneer the concept of ‘self-repairing cities’.