People who suffer with anxiety should take up regular yoga to improve their symptoms, research suggests.

A study of 226 people suffering with generalised anxiety disorder took up either Kundalini yoga, a stress-management course or cognitive behavioral therapy (CBT).

Three months later, after weekly hour-long sessions, more than half (54 per cent) of those who practised yoga saw their symptoms improve.

This is far superior to the results of the stress management cohort, where only a third of patients saw their condition improve.

But CBT, hailed as the gold-standard of anxiety treatment, was found to be the most effective method, with 71 per cent of that group improving.

Generalised anxiety disorder is a common, impairing and under-treated condition affecting an estimated five per cent of people in the UK, according to the NHS.

While most people feel anxious from time to time, it is considered a disorder when worrying becomes excessive and interferes with day-to-day life. 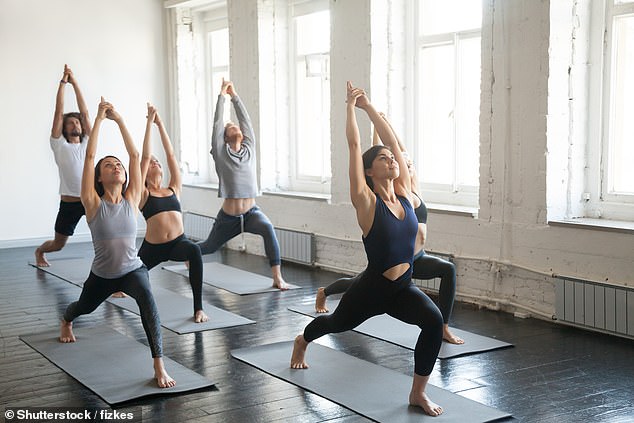 A study of 226 people suffering with generalised anxiety disorder either took up Kundalini yoga, a stress-management course or cognitive behavioral therapy (CBT). Three months later, after weekly hour-long sessions, more than half (54 per cent) of those who practised yoga saw their symptoms improve (stock)

However, although yoga showed short-term benefits, it was no better than stress management in the long term.

‘Our findings demonstrate that yoga, which is safe and widely available, can improve symptoms for some people with this disorder and could be a valuable tool in an overall treatment plan.’

‘Many people already seek complementary and alternative interventions, including yoga, to treat anxiety.

A study of almost 2,500 people recovering from heart surgery found breathing exercises and stretching boosted circulation and strengthened the heart.

The research, presented at the European Society of Cardiology congress in Paris by a team from India, found that a three-month programme of yoga while recovering from surgery following a heart attack resulted in lower risk.

Those who undertook a daily hour of breathing exercises and gentle movement were about 16 per cent less likely to die over the next five years.

Tests showed that participants’ hearts were more efficiently pumping blood around the body.

More than 100,000 Britons a year are admitted to hospital following a heart attack.

‘This study suggests that at least short-term there is significant value for people with generalised anxiety disorder to give yoga a try to see if it works for them.

‘Yoga is well-tolerated, easily accessible, and has a number of health benefits.’

The stress-management education control group received lectures about the physiological, psychological and medical effects of stress, as well as the anti-anxiety effects of lifestyle behaviours.

These behaviours include reducing alcohol and smoking and the importance of exercise and a healthy diet.

According to Dr Simon, future research should aim to understand who is most likely to benefit from yoga for generalised anxiety disorder to help providers better personalise treatment recommendations.

She said: ‘We need more options to treat anxiety because different people will respond to different interventions, and having more options can help overcome barriers to care.

‘Having a range of effective treatments can increase the likelihood people with anxiety will be willing to engage in evidence-based care.’

The findings were published in the journal JAMA Psychiatry.