Facebook, Apple, YouTube, and Spotify BAN podcasts and pages from Infowars’ creator Alex Jones on the same day, in crackdown on ‘hate speech’

YouTube, Facebook and Apple have become the latest Silicon Valley giants to bring the hammer down on Infowars’ creator Alex Jones.

Facebook announced Monday that it removed four pages belonging to Jones for posting content that violated its policies around hate speech and violence.

It came just hours after Apple revealed it removed the entire iTunes library for five of Jones’s six Infowars podcasts, including the shows ‘War Room’ and the daily ‘The Alex Jones Show.’

Not long after Facebook and Apple took action, YouTube removed The Alex Jones Channel, which counts close to 2.5 million subscribers.

Spotify also announced Monday it was taking further action against Jones, removing every episode of the Alex Jones Show from the streaming site. Prior to this, Spotify had only gotten rid of specific episodes of the show, leaving most of the library up on its platform.

In recent weeks, Facebook and other tech giants have faced repeated backlash over its inaction against the US conspiracy theorist. 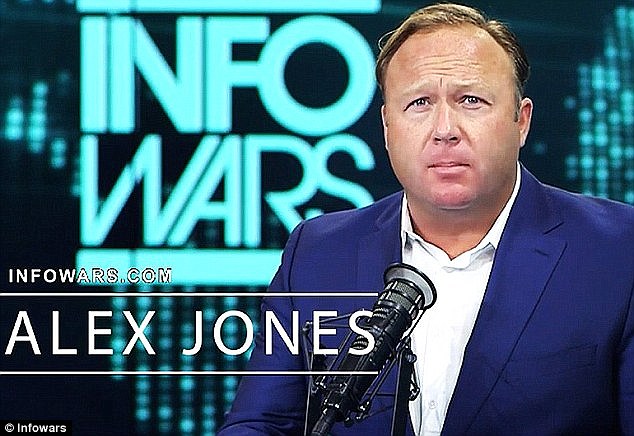 A notice on the Alex Jones Channel said the account had been ‘terminated for violating YouTube’s Community Guidelines.’

‘When users violate these policies repeatedly, like our policies against hate speech and harassment or our terms prohibiting circumvention of our enforcement measures, we terminate their accounts.’

YouTube had pulled four down videos hosted by Jones last month for violating its policies around hate speech and child endangerment.

The firm became aware that Jones was continuing to violate its policies and took further action as a result.

Apple announced its decision on Sunday night. Only one programme provided by InfoWars, ‘RealNews with David Knight’ remained on Apple’s platforms at the time of publication.

In a statement to BuzzFeed, Apple confirmed it had also removed Jones’ podcast for violating its guidelines on hate speech.

Many have pointed out that the timing of Facebook’s ban was peculiar, with the social media firm posting the announcement to its site at about 3 a.m. (PT), according to the Guardian.

It marks a major about face for Facebook, which had said in recent weeks that it refused to ban Infowars on the grounds of protecting free speech on its platform.

Facebook in July banned Jones personally from posting on the platform for 30 days and removed four videos for violating its rules.

‘As a result of reports we received, last week, we removed four videos on four Facebook Pages for violating our hate speech and bullying policies,’ Facebook wrote in a blog post.

‘Since then, more content from the same Pages has been reported to us — upon review, we have taken it down for glorifying violence, which violates our graphic violence policy, and using dehumanizing language to describe people who are transgender, Muslims and immigrants, which violates our hate speech policies.’

Facebook added that while many have criticized Infowars for posting fake news on the site, such as conspiracy theories related to 9/11 and the Sandy Hook shooting, the actions it took were not related to that. 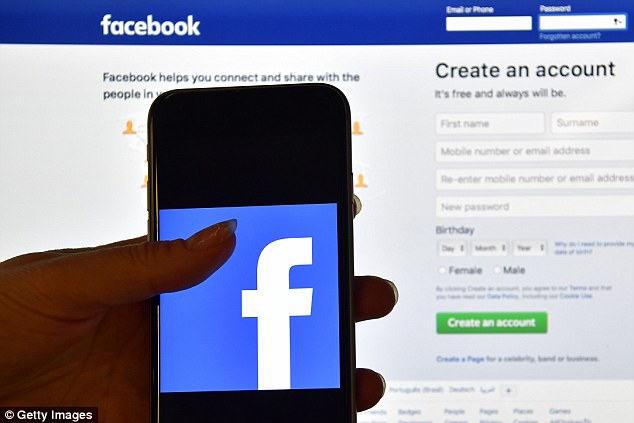 Facebook announced Monday that it removed four pages belonging to Jones for posting content that violated its policies around hate speech and violence. It marks an about face for Facebook, which had earlier refused to take down Infowars’ content on grounds of free speech

While Jones and Infowars are technically unable to access the site, Facebook said they still have the right to ‘appeal’ the company’s decision.

If neither party appeals or their appeal fails, Facebook will remove the Pages indefinitely.

Facebook said in a tweet last month that banning Infowars’ Pages ‘would be contrary to the basic principles of free speech’ after a CNN reporter asked why the firm had allowed Infowars, which had more than 900,000 followers, to continue to operate on its site.

A number of platforms have suspended or removed some of Jones’ conspiracy-driven content in recent weeks for violating hate content policies.

Jones says his shows, which are broadcast on radio, YouTube and other platforms, reach at least 70 million people a week.

The theories he has promoted include that the September 11, 2001 attacks on New York and Washington were staged by the US government. 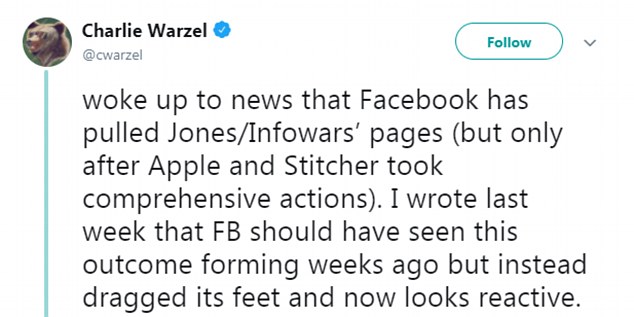 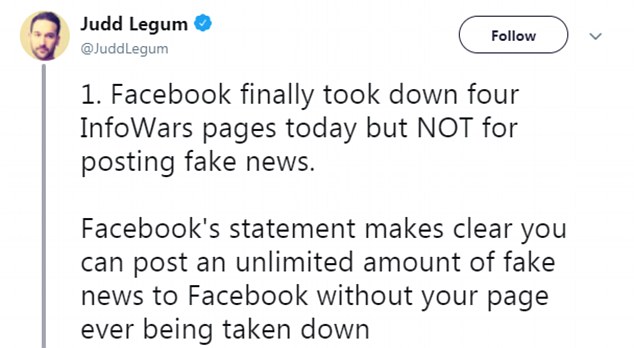 He has also promoted a theory that the 2012 Sandy Hook school massacre was faked by left-wing forces to promote gun control.

The shooting left 26 children and adults dead at a Connecticut elementary school.

Jones is currently being sued in Texas by two Sandy Hook parents, seeking at least $1 million (£0.77 million), claiming that they have been the subject of harassment driven by his programs.

Neither Jones nor a representative for InfoWars were available early on Monday for comment.

In July, YouTube slapped Jones’ channel with a ‘community strike,’ blocking him from broadcasting live on the site for 90 days.

Spotify, a music and podcast streaming company, followed suit last week when it removed some specific episodes of Jones’s programmes.

It’s unclear exactly how many episodes were ditched, although the vast majority of content created by Jones remains available to Spotify users.

‘Spotify can confirm it has removed specific episodes of `The Alex Jones Show´ podcast for violating our hate content policy,’ a spokesperson said late Sunday.

‘We take reports of hate content seriously and review any podcast episode or song that is flagged by our community.’ 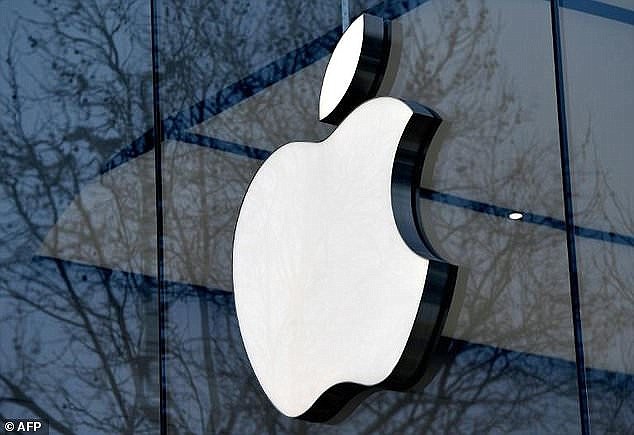 The move by Apple is the most sweeping of a recent crackdown on Jones’s programmes by online sites. A number of large platforms have suspended or removed some of the radio host’s conspiracy-driven content in recent weeks for violating hate content policies (stock image)

WHO IS ALEX JONES?

Alex Jones is a controversial radio and podcast host based in Austin, Texas.

Jones says his ‘InfoWars’ shows, which are broadcast on radio, YouTube and other platforms, reach at least 70 million people a week.

Among other claims, he has called the 2012 Sandy Hook Elementary School mass shooting a hoax.

He was sued for defamation by families of some of the children killed in that attack, which left 20 children and six adults dead.

Among other claims, Alex Jones (file photo) has called the 2012 Sandy Hook Elementary School mass shooting a hoax. He was sued for defamation by families of some of the children killed in that attack, which left 20 children and six adults dead

He now admits the shooting occurred but says his claims were free speech. He has sought to have the lawsuit dismissed.

Jones has also claimed that the September 11, 2001 attacks on New York and Washington were staged by the US government.

While he began broadcasting his shows in 1999, Jones’ profile has spread from the far-right fringe in recent years.

While running for president in 2015, Donald Trump told Jones his reputation was ‘amazing.’

The move followed a severe backlash on social media that saw Spotify subscribers threaten to ditch their accounts after the streaming service continued to host Jones’ ‘Infowars’ podcast despite blocks from other services.

‘I know countless writers and artists who use the service. Not anymore.’

Another user, who tweets under the handle @CopThese, added: ‘seriously, I’m going to miss my Spotify subscription, but this is a bridge too far.’

‘Alex Jones has been responsible for harassing parents of Sandy Hook children, Vegas shooting victims and threatening to kill the Special Counsel.

‘And you’re now hosting his podcasts??’