If Brad Abbey was in any doubt over the big job in front of him, all the Canberra Raiders fullback needs to do is remember the name Greg Inglis.

Inglis has terrorised the Raiders during his 14-year NRL career to score more tries than anyone else against the Green Machine. 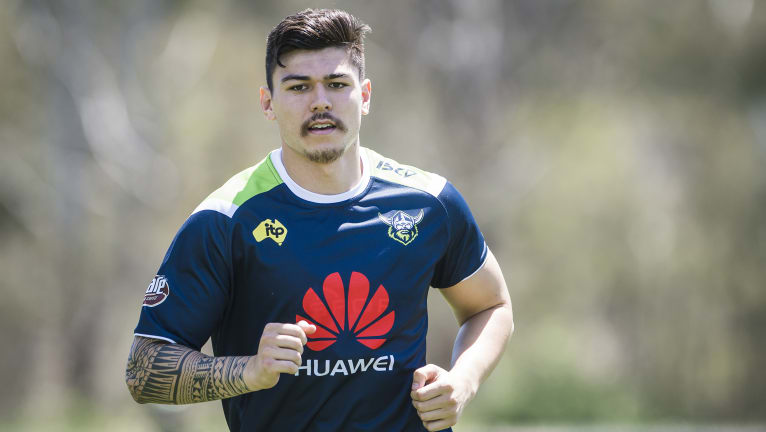 Raiders fullback Brad Abbey has a big job to do – organising the defence to stop Greg Inglis.

The South Sydney captain looks set to return from a broken thumb against the Raiders at Canberra Stadium on Saturday.

Part of Abbey's role at fullback is to organise the defensive line in front of him, something he knows will be crucial against the team that's scored the most tries this season and is second for points scored.

Not to mention a backline that's been bolstered by Inglis's return.

"It will be important this week against the Rabbitohs, they're a top team," Abbey said on Wednesday.

"GI's back. We've got the team to deal with him. I feel confident with our structures and our game plan, we'll do well."

Abbey's relished the return to fullback, having played a couple of games on the wing – the first time he's had to play there.

He helped set up the Raiders' only try in their 14-12 victory over the Sydney Roosters on the weekend, throwing the cut-out pass for flyer Jordan Rapana to cross in the corner.

The 21-year-old also went off for a head-injury assessment, but he said it was just a "stinger"to his jaw and he returned to finish the game.

"I'm more comfortable there. I've been playing there pretty much my whole career," Abbey said.

"It was my first time playing on the wing, this year, and I learnt a lot and it was hard, but enjoyable. I'm just enjoying being up there in first grade.

"You've got to have a big voice playing at fullback and you've got to be very dominant. The boys won't listen to you if you're not yelling at them.

"You've got to demand them around the park. I love doing that … they want that from you as a fullback. That just makes you feel more confident doing it to them."

While Abbey was wearing the No.2, Nick Cotric was the custodian before returning to the left wing he's dominated in the past two seasons.

They each played a crucial role in helping the other adapt to the different positions.

"We gave a lot of tips to each other and learnt a lot off each other. I think it was good that we could both play each others' positions and we learnt a lot."