Chief executive Gillon McLachlan says the AFL has nothing to be embarrassed about in the wake of the latest score review controversy.

Port Adelaide coach Ken Hinkley was furious after Josh Jenkins' snap was ruled a goal on review late in the match.

It proved the matchwinning score for the Crows. 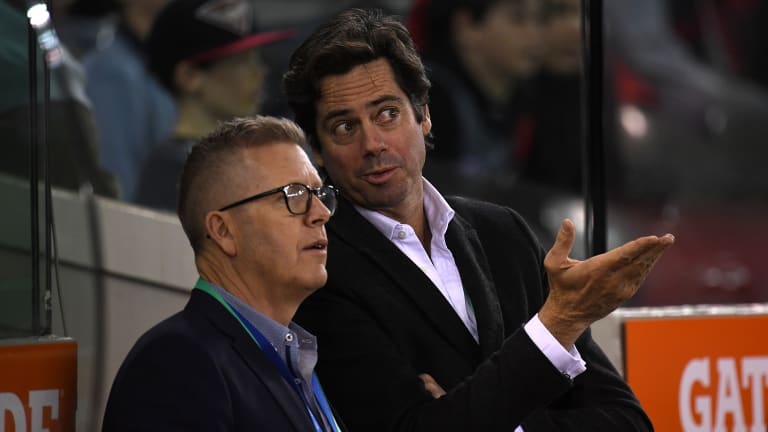 Hinkley blasted the league's score review process, saying the AFL should be embarrassed and disappointed.

Jenkins himself said post-match that he thought it hit the post.

"I've looked at it a number of times and I think most people say the score review was right – you can't conclusively say that hit the post," McLachlan told Channel Seven's Talking Footy.

"Josh Jenkins might have thought that, but the Port Adelaide guy who was right underneath the post, was dejected and was walking back – he didn't think it had hit the post.

"I'm not saying it didn't, I'm saying there was no conclusive way you could tell it did from the vision, so the score review was right.

"It's an emotional game, but I don't agree with what Ken said."

But McLachlan agrees it is time to fix the much-disliked ruck nomination rule.

"We have to fix that up, I know Steve (AFL football boss Steve Hocking) is onto that," McLachlan said.

"Whether it's as simple as if there's a third man up and the team is penalised, maybe the team takes responsibility.

"He will change that, I'm very confident, at the end of the year through the competition committee."

A week after the AFL came under fire for suggestions of a shortened AFLW season, McLachlan also stressed no decision had been made.

Melbourne captain Daisy Pearce has led calls for the women's season to be longer next year, given there will be two extra teams.

"We're still working through this – Daisy is a leader in our game and her opinion is incredibly important," McLachlan said.

"We'll hear from the players' association directly in the coming days and all that will get weighed up."