Four-time European champions Ajax have qualified for the Champions League for the first time in four years after a goalless draw in the second leg of their playoffs tie at Dynamo Kiev secured a 3-1 aggregate victory.

Young Boys reached the group stage of the competition for the first time in their history after winning 2-1 at Dinamo Zagreb for a 3-2 aggregate scoreline, while AEK qualified at the expense of Vidi after a 1-1 home draw to back up a 2-1 away win. 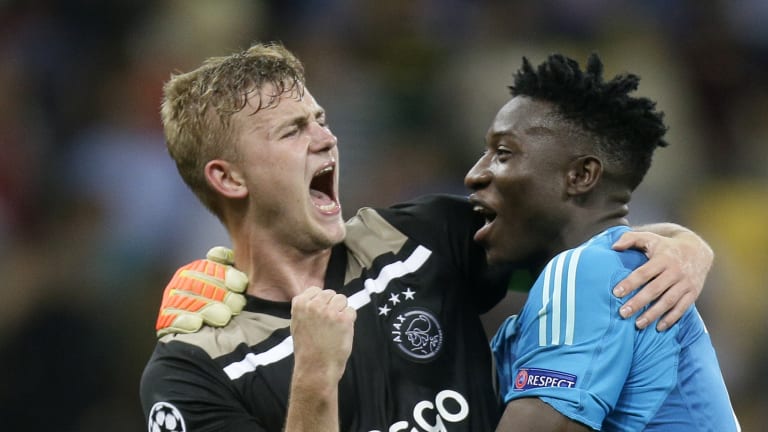 Ajax created numerous opportunities at home with the best coming on 14 minutes after Tomas Kedziora dragged down Matthijs De Ligt at a corner.

However, Dusan Tadic hit the post from the penalty spot, spurning an early invitation to put Ajax firmly in control of the tie.

"We made it difficult for ourselves by not scoring but this is well deserved," Ajax captain Matthijs De Ligt said.

"I'm not thinking about the draw, we're in ecstasy and are going to have a party."

In Zagreb, Izet Hajrovic smashed in the opening goal for the hosts after just seven minutes only for Young Boys to level on 64 minutes with striker Guillaume Hoarau slotting home from the penalty spot after Martin Leovac fouled Roger Assale.

Just two minutes later the Swiss side went ahead with Hoarau netting from close range after a corner was headed back into his path.

AEK reached the group stage for the first time since 2006 despite ending their draw with Hungarian minnows Vidi short on troops.

Petros Mantalos sent the hosts ahead from the penalty spot on 48 minutes before Loic Nego executed a neat chip nine minutes later to level the score.

The Greeks had Helder Lopes sent off with 10 minutes to go for a foul on the edge of his own area and Marko Livaja was also dismissed when a fight broke out after the full-time whistle.

"It's an unbelievable feeling that the team has returned to the Champions League after 12 years," AEK striker Ezequiel Ponce said.

"My teammates did a great job and I am very happy to be a member of this side and of this effort."

On Wednesday, PSV Eindhoven host Bate Borisov with a 3-2 lead, Salzburg are at home against Red Star Belgrade after a 0-0 first-leg draw and Benfica visit PAOK with their Champions League playoffs tie evenly poised at 1-1.