ALASTAIR COOK QUITS! England’s greatest-ever batsman retires after 161 Tests and more than 12,000 runs as he insists ‘the timing is right’ ahead of send-off at The Oval

Alastair Cook will play his 161st and final Test at The Oval on Friday, bringing the curtain down on a record-breaking international career at the age of 33.

Cook has struggled for runs all year, averaging just 18 in nine Tests in 2018, and has a top score of just 29 from seven innings in the current series against India.

He will now have one final chance to add to his England-record Test tally of 12,254 runs before calling it a day. 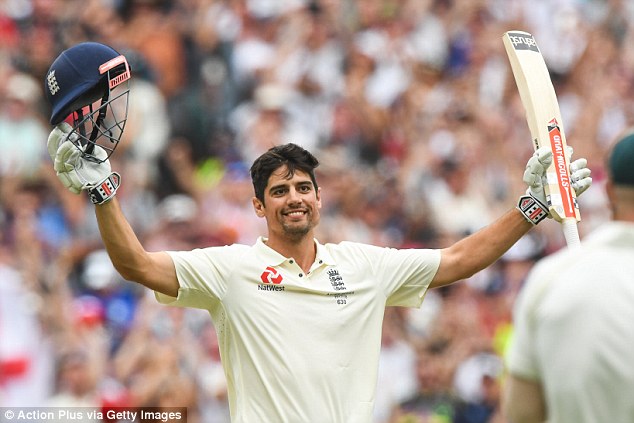 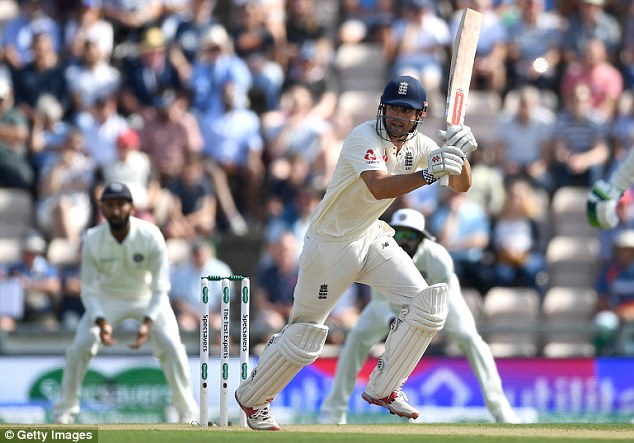 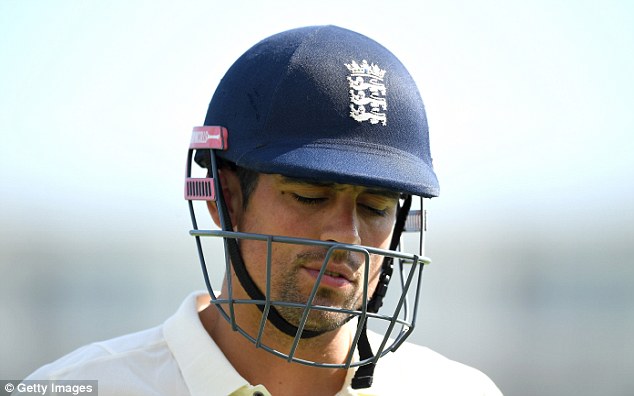 ‘After much thought and deliberation over the last few months I have decided to announce my retirement from international cricket at the end of this Test series against India,’ he said.

‘Although it is a sad day, I can do so with a big smile on my face knowing I have given everything and there is nothing left in the tank. I have achieved more than I could have ever imagined and feel very privileged to have played for such a long time alongside some of the greats of the English game.

‘The thought of not sharing the dressing-room again with some of my team-mates was the hardest part of my decision, but I know the timing is right.

‘I have loved cricket my whole life, from playing in the garden as a child, and will never underestimate how special it is to pull on an England shirt. So I know it is the right time to give the next generation of young cricketers their turn to entertain us and feel the immense pride that comes with representing your country.’

Unless Cook scores 147 runs at The Oval, which would allow him to overhaul Kumar Sangakkara’s tally of 12,400, he will finish his career as the sixth-highest run-scorer in Test history. Apart from Sangakkara, only Sachin Tendulkar, Ricky Ponting, Jacques Kallis and Rahul Dravid have made more – though none spent half their career facing the new ball on English pitches. 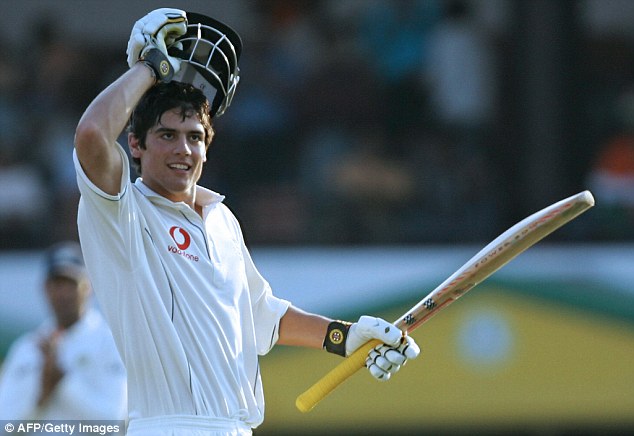 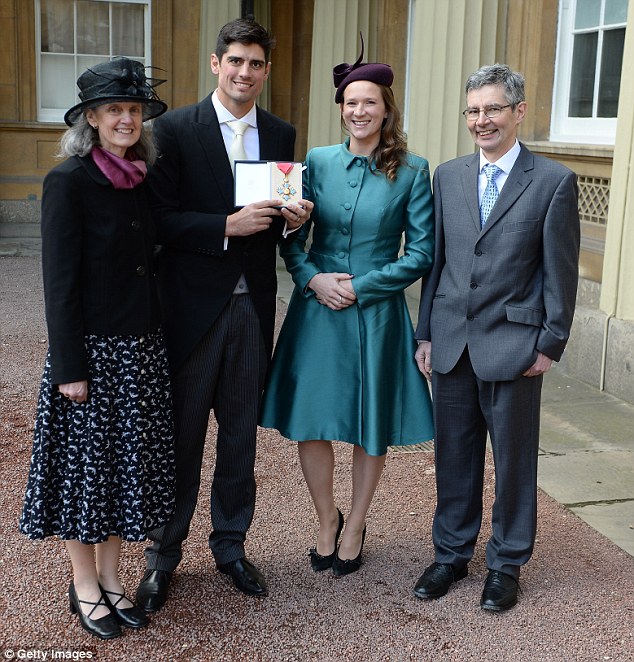 Cook with his mother Stephanie, wife Alice and father Graham after receiving his CBE in 2017 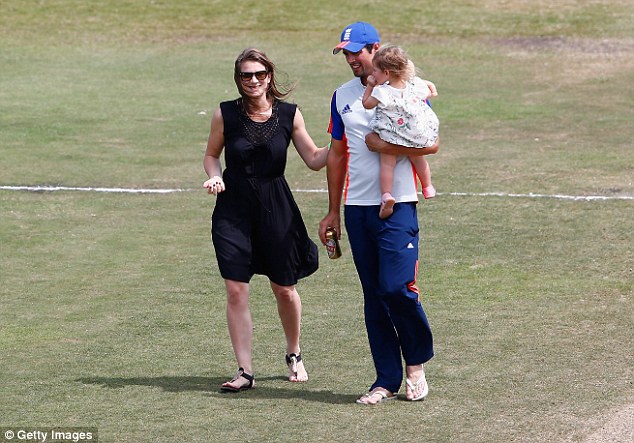 WHERE DOES COOK RANK?

Most Test hundreds for England (all time)

Most Test fifties for England (all-time)

His white-ball international career ended when he was sacked as one-day captain not long before the 2015 World Cup. He played in 92 ODIs, averaging 36 and scoring five hundreds, and in four Twenty20 internationals.

He was never pretty to watch, but it’s hard to imagine that many more mentally resilient players ever took the field for England. With winter tours of Sri Lanka and the West Indies coming up, the path is now clear for Surrey’s Rory Burns to become the first new opener of the post-Cook era. Cook, meanwhile, will continue to play for Essex in next season’s County Championship. 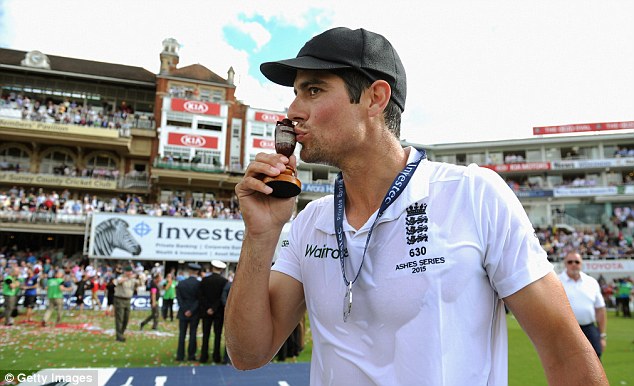 ‘There are too many people to thank individually,’ said Cook. ‘But a special mention must go to the Barmy Army and all supporters for their constant encouragement for the team, and also special mention to Graham Gooch.

‘As a seven year-old I queued for his autograph outside Essex County Cricket Club and years later was so fortunate to have him mentoring me. Graham was my sounding board, especially in the early years of my career, spending hour after hour throwing balls at me with his dog stick. He made me realise you always need to keep improving, whatever you are trying to achieve.

WHO HAS SCORED THE MOST TEST RUNS?

‘My family and I have had 12 wonderful years fulfilling my dreams and this could not have been done without them. So I wish to thank my parents and brothers, my wife, Alice, and her family for their quiet, unwavering support behind the scenes. As cricketers, who travel frequently, we often don’t realise just how important our families are to our success.

‘I would also like to thank Essex County Cricket Club for their help and support ever since I was 12, and I can’t wait to get fully involved with them in the 2019 season. I wish the England team every success in the future, and I will be watching with great excitement.’

Former England captain and Sportsmail columnist Nasser Hussain led the tributes to Cook, claiming: ‘The game and the country are very, very proud of a cricketer that was produced at Bedford school but played here at Essex.’ 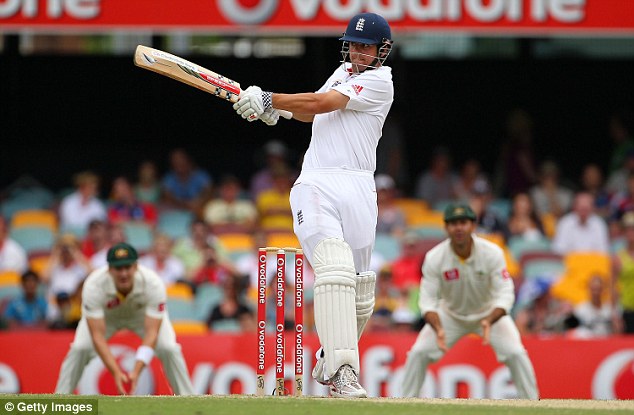 ‘In a batting sense, your modern batsmen are all about attacking and can they survive and can they play long periods,’ he told Sky Sports.

On what kind of send off the opener will want, Hussain said: ‘First of all runs, that’s what he would love more than anything else. The last thing Alastair will want are a couple of low scores and everyone standing for him. What he will desperately want is to dig deep just once more, get a score and walk off.’

He added: ‘I am sure the Indian cricket team will give him a guard of honour, all due respect that he deserves.. but more importantly, as a cricketing nation we have all appreciated Alastair as a player and a human being. The series is done and dusted but he will just want one more special moment and whatever happens at The Oval he has been England’s greatest batsman ever’.

His former captain Michael Vaughan labelled Cook: ‘the nicest cricketer we have ever had.

He wrote on Twitter: No player has given more to the England cricket shirt .. No player has got more out of there (sic) ability… no player has shown more mental strength than Alastair Cook… Thanks for all the memories Cookie