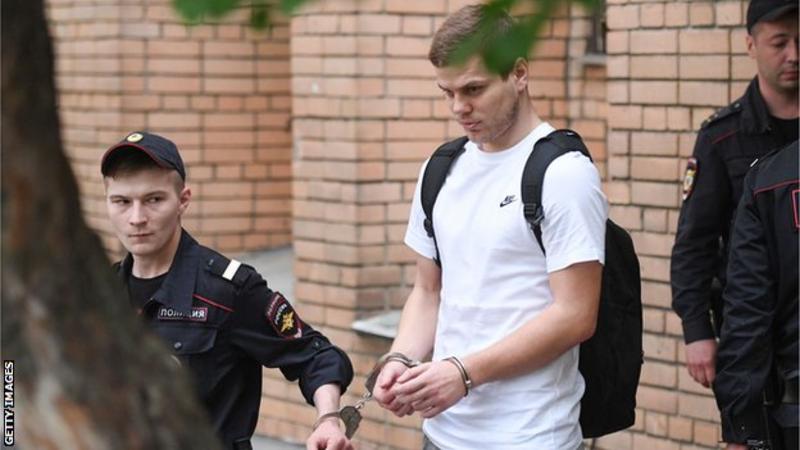 Kokorin was recently jailed for 18 months over an assault on a government official and has been in police custody since October.

Krasnodar midfielder Pavel Mamaev was also jailed over the incident.

Despite spending the majority of the season behind bars, forward Kokorin’s name appeared in Zenit’s title-winning squad list earlier this month and the club has all but confirmed he will receive his medal.

“I think we will wait so that he can receive it personally,” Aleksandr Medvedev, Zenit’s club president, told the Sport Express website.

“I think that the medal should find its way to the player after he is out,” he added, dismissing the idea of giving it to Kokorin’s family.

Medvedev’s comments follow a lively debate in the Russian sports media about whether Kokorin, 28, is eligible or deserves to be honoured.

A total of five appearances this season means Kokorin has played just 126 minutes of football across Russia’s domestic league, cup competition and the Europa League, according to Sport Express.

The Russian Premier League, however, permits a title-winning team to award a medal to all 40 players on their official squad list, irrespective of playing time.

Reaction to the decision has been mixed.

Former Zenit player Sergei Vedeneyev said the rules were the rules and a player is due a medal “even if he does not play a single match”.

Aleksei Strepetov, another ex-Zenit player and coach, expressed sympathy for Kokorin but told Moscow TV channel 360 that he would not give him the medal.

“I would rather give him back his freedom, put him back into the team and let him prove his worth again by his own hard work,” Strepetov said.

The two footballers attacked a trade ministry official with a chair and beat up a driver in Moscow.