Australia's hopes of a shock Test victory in the United Arab Emirates next month have been boosted by all-rounder Mitch Marsh declaring he is almost ready to resume bowling in match conditions.

Marsh will captain Australia A through two first-class matches against India A, the first beginning in Bengaluru on Sunday. While the series is a test of his emerging captaincy, which has him in the running for the Test vice-captaincy and captaincy of the one-day international side, it's his fast bowling which is of particular importance for the two-Test series against Pakistan.

He has not been able to bowl at full pace since ankle surgery in April after the Test series against South Africa. The injury forced him to abandon plans to play county cricket, cruelling his hopes of valuable experience with the Dukes ball before a big 2019 in England. 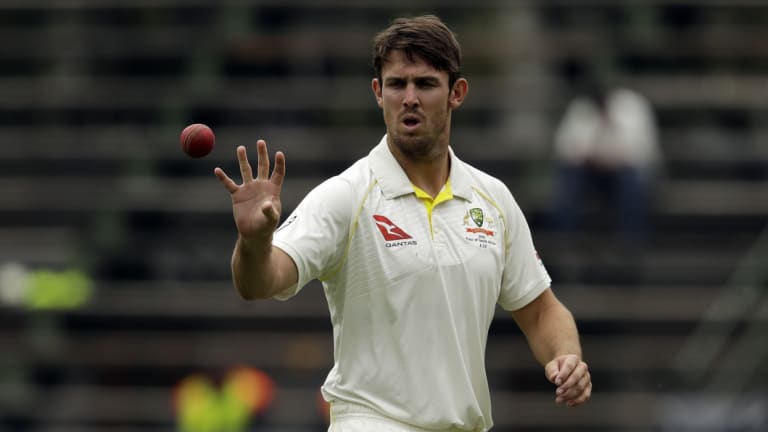 Mitch Marsh will captain Australia A in India.

Marsh has lifted his workload in recent weeks, and has been bowling at full pace in the nets in India but will avoid taking the ball in the opening first-class match. He said on Saturday he was progressing well in his return from a five-month break.

"I am going really well at the moment. I am back bowling pretty much at full tilt now … hopefully, I will bowl a few overs in the second four-day game here. But it's all progressing well. I have had no real setbacks through the whole injury process. I am really rapt," he said.

"I have had my fair share of injuries to come back from. I guess in that scenario you lean on your past experiences. It's been a long lay off, five months. Fortunately for Australia, we haven't had that much cricket, compared to what we usually have, so I haven't missed a lot of cricket. I am really rapt to be back now and can't wait to get stuck into [the game]."

A fit Marsh will be central to Australia's plans against Pakistan on the spinning decks of Dubai and Abu Dhabi next month. He could share the new ball with Mitchell Starc, allowing the tourists to field three frontline spinners – should the selectors think that is the best option. The squad for that trip will be chosen after the series in India.

Marsh all but sealed his spot in the team with strong batting against England and South Africa last summer and the suspensions of Steve Smith and David Warner mean he could be fast-tracked for higher leadership honours.

Fairfax Media understands the WA captain and Victorian Aaron Finch are the leading candidates for the captaincy of the one-day international team, with next year's World Cup the chief prize. Then there is the role of deputy to Tim Paine in the UAE.

"I have had a little bit of experience captaining Western Australia … it's not something I tend to think about too deeply but I think if the opportunity arose I would grab it with both hands," he said.

"Ultimately, that is out of my hands at the moment. I just want to be the best captain I can be here. I am really looking forward to captaining in these conditions which is something I don't experience much playing at the WACA every second week and in Australia."

Marsh turns 27 next month and, with 28 Tests to his credit, is ready to become a consistent plank in a team needing players of his ilk to help replace the missing runs of Smith and Warner. Marsh has 1170 Test runs at 27.85, with two tons, and 33 wickets at 42.06 – averages he would prefer were switched around.

Queenslander Matt Renshaw (hamstring) has been ruled out of game one but the opener remains a chance to play in the second match. Renshaw is one of several Australia A batsmen, including Usman Khawaja and Peter Handscomb, hoping to confirm their spots in the Test side.

"There is a great vibe around the group. You get a sense everyone is really hungry to perform," Marsh said.

"There are plenty of opportunities in Australian cricket at the moment. As a team we have a real focus that we want to win this mini series and, hopefully, start something special as a group."