Coaching great Allan Jeans’ sole year at the helm of Richmond was spent dealing with the debilitating effects of mental illness, according to then-Tigers chief executive Cameron Schwab.

Four-time premiership coach Jeans spent just one year at Punt Road, coaching Richmond to five wins in 1992 after replacing club legend Kevin Bartlett. He was replaced at the end of the season by John Northey. 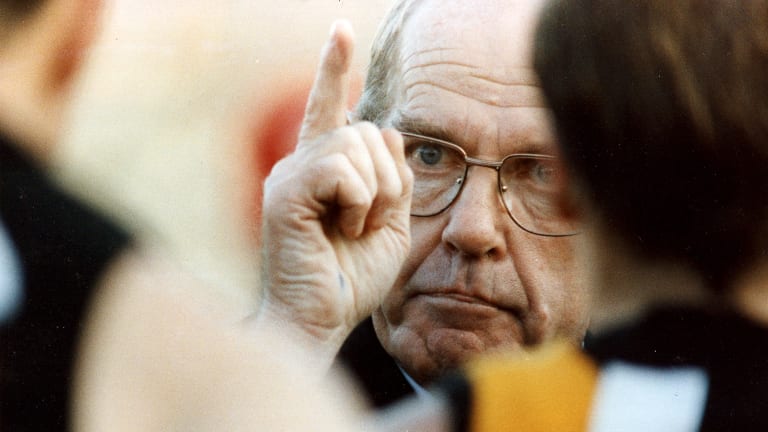 Allan Jeans during his year at Richmond.

Speaking in an episode of The Greatest Season That Was: 1993  podcast to be released on Monday, Schwab revealed Jeans, who died in 2011, had been suffering from anxiety.

“It was no later than round one or two. He came to me and said that he was ill. I was assuming it was something to do with [his] brain injury a few years earlier. He didn’t coach in ‘88. But he actually was dealing with anxiety,” Schwab said.

“It was a big thing at the time, because I’d never had anyone really explain mental illness to me in any way, in any shape or form. He was starting to talk to the debilitating effects of the anxiety, and basically said he wouldn’t be able to coach beyond the end of that year.”

Schwab explained that Jeans’ illness had been kept a secret.

“It was an unbelievable act of courage on his behalf. So the club never saw the best of him because of that, as much as anything.

“But you wouldn’t have necessarily have known that. Certainly in-club, I don’t know who Allan told in his own support group, but in club there would have been only two or three people who knew.

“We worked through the year really closely together, and formed a relationship which particularly after my father [AFL administrator Alan Schwab] died [in 1993], was probably as significant in my life as any other person”.