The only way is down for Ariarne Titmus. Another race for the Brisbane teenager, this time in the company of the wondrous Katie Ledecky, produced another milestone and set the scene for an intriguing 400m showdown later in the Pan Pacs meet in Tokyo.

Titmus, still just 17, ticked off her first goal by claiming Jess Ashwood's Australian 800m record, touching the wall at the Tatsumi International Swimming Centre in 8min 17.07s. It was almost three seconds faster than her gold medal swim at the Commonwealth Games. 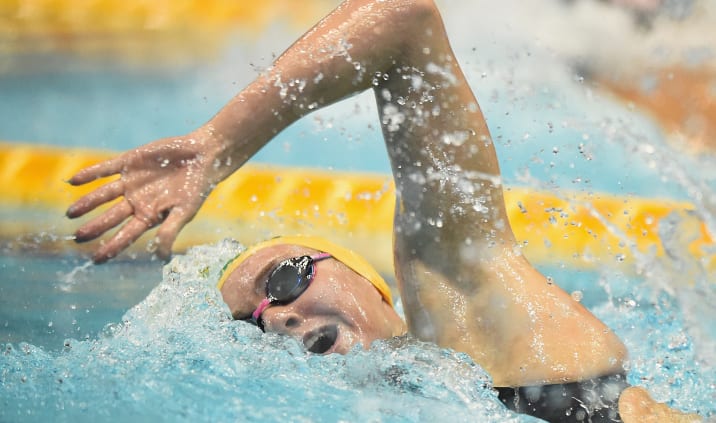 That time was good enough for second, well behind the peerless Ledecky but ahead of her American team-mate Leah Smith, who pushed Titmus all the way through a thrilling final 100m of the race.

Her arms were burning late but Titmus absorbed every jab Smith threw in the end stages of the race, kicking strongly to battle her way to the wall in a swim that will only give her further confidence in the event heading towards the Tokyo 2020 Olympics.

The 400m remains the focus for Titmus, although she had increased her endurance training under coach Dean Boxall to see how low she could go in this event. The gap to Ledecky was significant – she rattled off an 8:09.13 in a new championship record – but Titmus is at the stage of her career where she can shed chunks of time in a hurry.

She stayed close to Ledecky in the early stages. Boxall had told her not to worry if she was too close, in case Ledecky was taking it easy at the start. Instead, she was well under world-record pace through 300m.

"The first 400m felt really good, I had easy speed. I started to feel it in the back end but I'm finally happy to get that breakthrough, which is good," Titmus said.

"I started to see Leah come, which pushed me along a little bit. She had a great back end. But I feel like I took the race out the way I wanted to. I just have to get a bit more 800m work under my belt to help my back end.

"Most of my training is targeted towards the 400m but I have done more 800m training for this meet. I'm glad I can finally do a good PB."

Ledecky owns the 400m world record, of course, and has never lost the race at an international meet. Titmus won't be likely to beat her here but the signs were good that she could crack the fabled four-minute mark.

Should she do that, things could get very interesting between the pair over the next few years. Titmus is absolutely fearless and Ledecky hasn't had a real rival in the event for years. That could all change as the next Olympics nears.

As for Ledecky, the stat sheet just keeps being updated. This was the fifth-fastest 800m of all time and she owns the other four. She also owns the next 15.

But her night didn't go completely to plan. Canada's 18-year-old star Taylor Ruck would serve it up to her in the 200m before taking gold, with Japan's Rikako Ikee, another 18-year-old, second. Ledecky's bronze would be just her second defeat at a major international meet.

She had just swum her 800m and the fatigue was evident as Ruck poured on the pressure in the third 50m of the race. Expect Titmus, who skipped the 200m, to do the same when the next meet.