Lambert has been sidelined for almost a month, having undergone ankle surgery following the Tigers’ 74-point win over Gold Coast in round 21. 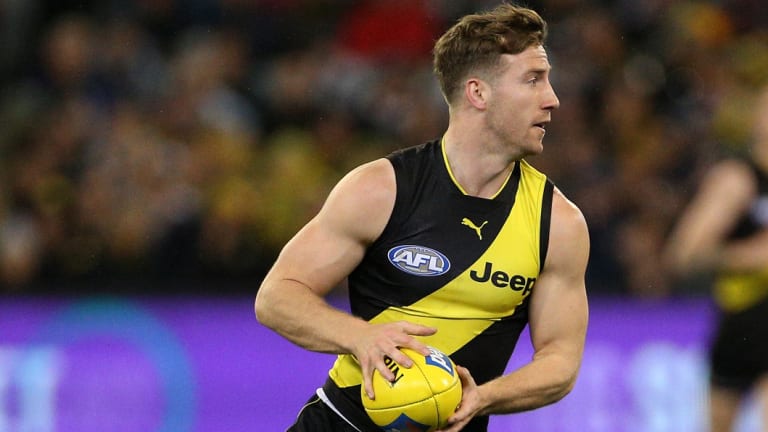 Kane Lambert has been a key player for the Tigers.

Prior to the operation, the 26-year-old had played 44 consecutive games, including the club’s drought-breaking premiership, in which he played a starring role.

Following on from a stellar 2017 season, which saw him finish third in Richmond’s best-and-fairest, Lambert has produced another huge campaign this year that has seen him ranked second at the Tigers for disposals, first for handballs, fifth for clearances, fifth for contested possessions and sixth for inside 50s. He has also kicked 15 goals.

In his absence, Richmond struggled to overcome bottom-10 sides Essendon and the Western Bulldogs in their final two home-and-away games.

“Kane’s as diligent as ever, he’s given himself every opportunity and, from what I’m hearing, he’ll be every chance to play on Thursday night which we’re excited about,” Astbury said at Punt Road Oval on Tuesday.

“Kane’s put together a huge body of work this season, and (he’s) a very important player to us. He’s just an unbelievable warrior and I’m sure he’ll be fine.”

Richmond were also a tad fortunate to beat Geelong in round 20, but Astbury puts the first-placed Tigers’ indifferent final month more down to the different challenges the opposition were serving up to them, rather than his team's motivation levels.

“I think it’s a blessing. We got a good look at different systems and how they’re going to challenge us so we’ve trained it and we’ll continue to train it,” Astbury said.

Legendary North Melbourne coach Denis Pagan has written off the Tigers’ premiership hopes because he believes they’re in danger of getting ahead of themselves, but Astbury dismissed those concerns.

“It’s an interesting concept that he’s got,” Astbury said of Pagan, who will present the Jock McHale Medal to the premiership coach on grand final day.

“I think naturally people might sort of look to the outcome a little bit, but with our playing group I know that we’re a week-to-week outfit. If you look too far beyond that it will bite us, so we just look to the next session, the next game, and we’re sure that will hold us in good stead.”

Richmond head into this year’s finals series as reigning premiers, as opposed to last year when they had the weight of a 37-year premiership drought on their shoulders. But Astbury didn’t feel that dealing with the hype surrounding arguably the biggest club in the competition would be any different this year.

“I still stand here today as excited as I was on the eve of the qualifying final against Geelong last year,” he said.

“It feels very much like a finals atmosphere and we’re excited for that. Obviously being at the Richmond Football Club and having 100,000 members, it means that it’s going to be a really big, highlighted game.

“We’re encouraged to embrace that so you don’t want to miss the moments leading into big games stressing about the game, you just want to enjoy the build-up so that’s something that we’re focusing on and our leaders do a really good job at driving that.”