Geelong star Daniel Menzel’s manager Adam Ramanauskas has confirmed that at least two rival clubs have enquired about his client’s services beyond this season.

One of those clubs, St Kilda, had a meeting with Ramanauskas regarding their interest in Menzel, who comes out of contract at the end of the year.

Ramanauskas stressed that Menzel was more likely to stay at Geelong in 2019, butsaid that if he was offered a multi-year deal elsewhere, he would have to consider accepting it.

Menzel has historically signed only one-year deals with the Cats due to the fact that he suffered four consecutive knee reconstructions which sidelined him for four years.

The 26-year-old has been like a duck to water since returning to Geelong’s line-up in late 2015, booting 100 goals in 49 games at an average of more than two a game.

“There’s probably a moment in most players’ career where people see what they actually can do rather than what they can’t do,” Ramanauskas told RSN on Thursday.

“It’s more likely he’ll stay at his club but, at the same time, and this is absolutely no different to last year, if there’s a multi-year offer for Daniel at another football club, he has to consider it. I can’t be any more clearer than that.” 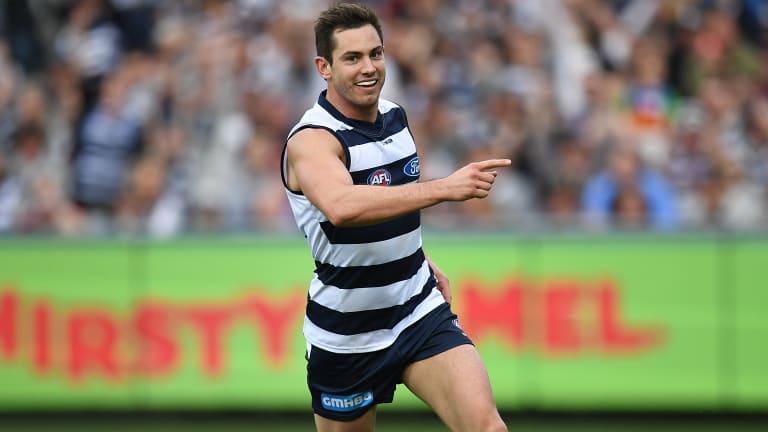 Daniel Menzel has had at least two clubs ask about him.

Menzel came close to leaving the Cats at the end of last season but after failing to secure a deal at a rival club, he re-signed with Geelong in late October.

Despite the Saints’ interest in Menzel, Ramanauskas said the struggling club had not yet offered a contract to him.

The former premiership Bomber also insisted that talks with Geelong about Menzel were “going fine”, but they haven’t offered his client a multi-year deal.

Ramanauskas wasn’t sure if Menzel’s form in the past two seasons, which has been particularly good, would convince the Cats to change tack and offer him a contract that was longer than 12 months.

After starting 2018 like a house on fire with 15 goals in the opening five rounds, Menzel missed three months due to a bad reaction to a cortisone injection into his groin.