Home » Sport » Benji to play for his late 'koro' against Knights

The late grandfather of Benji Marshall made it clear he wanted the Wests Tigers pin-up to play on Friday night.

Marshall’s 93-year-old ‘koro’ passed away on Wednesday and no doubt will be in the playmaker’s thoughts as the Tigers try to cling to their faint NRL finals hopes against the Knights in Newcastle. 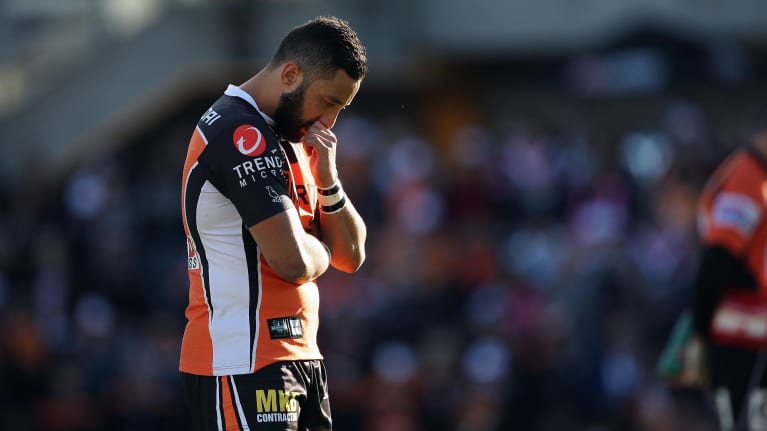 Heavy heart: Benji Marshall is mourning the death of his grandfather but will play on Friday night.

‘‘He’ll definitely play,’’ Tigers coach Ivan Cleary said. ‘‘‘Benj’ actually brought it up with me and how his grandfather said to him, ‘you have to play’. It’s been an emotional week for him. But he looks pretty determined.’’

Marshall flew home to New Zealand to be with his grandfather last weekend, and is expected to cross the Tasman again first thing on Saturday to attend the funeral.

In a heartfelt Instagram post, Marshall said: ‘‘You were my number 1 supporter and always had my back. You even wore your Wests Tigers jersey every day, then the Dragons and Broncos, but you were happiest when I came home to the Tigers so you could wear your Tigers hats again.’’

Marshall and fellow premiership Tiger Robbie Farah are expected to make calls on their futures in the coming weeks, and Cleary would love to have them both on board if that was what they wanted.

It’s understood the pair are keen to make a decision before the round-23 clash against St George Illawarra at Leichhardt Oval so proper farewell celebrations can be planned or canned.

‘‘We haven’t had that conversation [about next year], but it’s getting closer,’’ Cleary said. ‘‘It’s similar to Robbie. They have to work out whether they want to play on.

‘‘I have too much respect for them to push them into anything, which I wouldn’t do. It will happen organically. We’ll get there.

‘‘Benji has been super handy for us, considering everything that has gone on with ‘Grub’ [Josh Reynolds]. He’s still got it.

‘‘Benji has played way more football than he anticipated. I didn’t think too deeply into it, but I probably didn’t anticipate him playing this much either.’’

The Tigers sit four points adrift of the New Zealand Warriors and need to beat the Knights in their own backyard if they are to remain in the finals race. A shock loss to Canterbury continued a pattern for the Tigers, said Cleary.

‘‘We started the year with two big wins against big teams, then we played the Broncos in round three and lost, and we weren’t great that night,’’ Cleary said. ‘‘To the Dogs’ credit, that win was coming for them [last week]. They had beaten Newcastle, they should have beaten Canberra, and they have a new lease of life at the moment.’’

Based on the effort against Dogs, it was asked of Cleary if the Tigers deserved to feature in September.

‘‘There are five games to go, and you finish where you deserve. It’s not over yet,’’ Cleary said.

The Tigers knocked over St George Illawarra and South Sydney before the stunning loss to the Bulldogs. Newcastle, who beat the Tigers right on full-time earlier this season, were mowed down by the Cowboys last Friday. Marshall, Farah, halfback Luke Brooks and new fullback Moses Mbye looked good until the last-start hiccup.