In the fallout to the regrettable Adelaide pre-season camp, word continued to percolate of player disenchantment.

The unhappiness of Indigenous players, in particular, over elements of the contentious Collective Minds camp fed the idea that small forward Eddie Betts was among those unhappy with the club and contemplating a move back to Victoria. 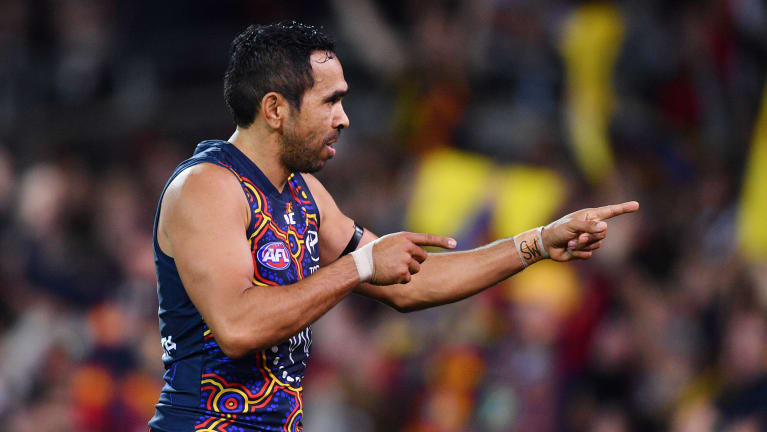 At least one finals-playing Victorian side was interested in securing the contracted opportunist forward if he was gettable.

On Tuesday a spokesman for his new management company, Adelaide-based W Sports & Media, moved to quash suggestions Betts would this week seek a trade from the Crows.

“Eddie is committed to honouring the remainder of his contract with the Crows,” the spokesman said in a brief statement.

Betts, 31, is contracted until the end of 2020 after signing a three-year deal early last year.

The Crows moved earlier in the year to apologise to their Indigenous players for culturally insensitive elements of the camp, including the use of a talking stick to hand around the group during the camp.

“That could be one aspect that I would acknowledge could’ve been done better,” Adelaide chairman Rob Chapman said in June.

“The people that were running the camp probably could’ve explored better ways of using some terminology that might’ve had an impact on our Aboriginal Indigenous players … we addressed that some months ago.

“I’m not sure they were upset on the camp, but we acknowledge some of the terminology used by the facilitators … on reflection they would say, could’ve been handled better.

“Today they are in good spirits. We’ve put that component of that camp behind us. There are many good things that have emerged from the camp.”

Betts, along with teammate Sam Jacobs, was reported to have raised issues about the camp with Chapman.

Betts later said on Adelaide radio that the camp was not an issue but for a period he struggled mentally with the rigours of the season as he battled with injury.

“At times when I was going into the footy club it had nothing to do with the camp, it was more so my body.

“I felt ‘why am I playing? Why am I putting myself through this? Because my body feels like it’s not holding up. ’ ”