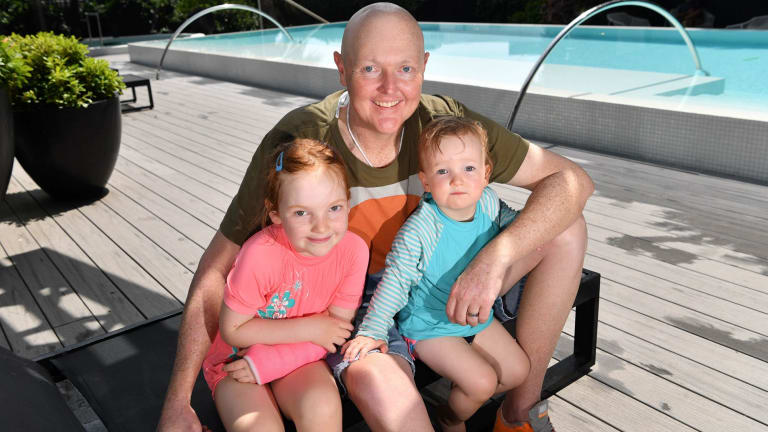 Jarrod Lyle with daughters Lusi and Jemma earlier this year.

The one abiding thought everyone in golf must have is that Jarrod Lyle was dealt a pretty lousy deck of cards to play.

From Shepparton, his early skills saw him go to Melbourne to play pennant golf for Commonwealth but at only 17 he was diagnosed with leukaemia and spend months in a hospital before the doctors announced him free of the disease.

It was then he began making a name for himself in amateur golf, winning local events and playing well enough to assume he could make a worthwhile living playing the game professionally.

He was a big, lumbering kid; one when asked about his physique described himself playfully as a ‘big unit’. That he was but like most over-sized blokes he had a beautiful natural rhythm and flow to a swing and what old golfers colloquially call ‘good hands’.

His first big showing was at Royal Melbourne in the 2005 Heineken Classic. Craig Parry won that week beating Nick O’Hern in a play-off but right until the final hole, the rookie Lyle had a chance.

He was done in by a hook into the tee-tree on the left of Royal Melbourne’s 18th but he wasn’t the first to fall for that trick and in the end his 271 was a shot ahead of the defender Ernie Els and two ahead of two others destined to become major champions, Trevor Immelman and Henrik Stenson.
Had he won that week the reward was a card on the European Tour but fate sent him the other way and across the Pacific to the US.

Over there he battled between the main tour and the secondary Web.Com tour where he won twice and earned his way to the big show. Lots of players bounce between the two tours but in early 2012 at historic Riveria Country Club in the Los Angeles Open he finished fourth. His supporters were entitled to assume he would establish himself on the tour and go from success to success. Instead within a couple of weeks he was sentenced to the a return bout with leukaemia. Any thought of playing again for the rest of the season was over and in retrospect so was his US career.

It was brutally unfair but as Bobby Jones, another to suffer cruelly from an awful disease, once said of his affliction: ‘‘You just have to play your ball as it lies.’’

Jarrod recovered a second time and returned to the tour but staggeringly those in charge denied him an exemption into his first week back and instead he made it through the qualifying and played well enough to finish 31st.

In the end it was a fruitless chase to make up the money he needed to secure his place on the tour and he came home to establish some sort of normal life with his wife and two little girls. At least, we all thought, he had his health and he could establish himself here.

Instead the spectre of the cancer returned. It’s miserable, it’s a terrible hand and now it is up to the game and his friends to make sure Briony and the two girls are all right.

In a game awash with money it is time to ensure their sadness and their future is not also one of material hardship.

Jarrod did as the great Jones himself did and played his own ball with a dignity we can only hope we would display in the same circumstance.