If seeing his face on a billboard outside Flinders Street Station didn’t show Ben Simmons things have changed, a crying fan certainly did.

Simmons has been in the North American spotlight since his teenage years after becoming a highly-ranked US high school player. 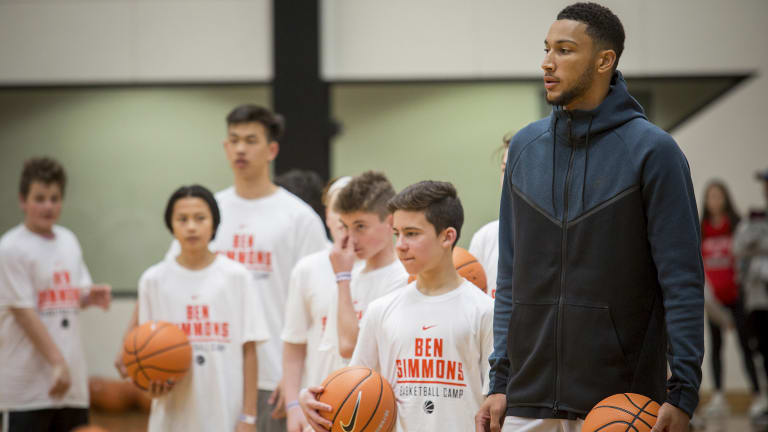 King of the kids: Ben Simmons’ camp in Melbourne was the place to be for starry-eyed youngsters.

But when he would come home to Melbourne, he could often blend in, sometimes he would be noticed by keen basketball fans who watched his highlight videos on YouTube.

That changed forever after winning the NBA rookie of the year award last season and unluckily missing out on becoming Australia’s first NBA all-star, Simmons knew to expect a bigger welcome home.

“The other day when I saw someone crying because they saw me, it was kind of weird but at the same time it was amazing, surreal to have that effect on people and kids,” Simmons said on Sunday at his annual Ben Simmons Basketball Camp at the State Basketball Centre in Wantirna South.

The primary school aged campers often turned their eyes towards Simmons if he was nearby and before the teenage session the players were instructed to keep their focus on their coaches and wait for Simmons to join in with their group.

As the son of NBL import Dave Simmons, Ben grew up with some name recognition but Dave said his son has grown used to the spotlight.

“He seems to have got used to managing it well as it has been going on since high school,” Dave Simmons said.

“People don’t realise he has had a lot of practice with cameras in his face and the other thing that helps him is that he was raised in Australia so he is not impressed with a lot of things.

“People can be sort of star-struck over there but Ben is an Aussie, he is sort of take it or leave it and that’s a great attitude to have in a competitive and, I guess, dangerous industry.”

The Philadelphia 76ers star is about to enter his third year as an NBA player but his second season on court after missing all the 2016-2017 campaign due to injury.

The third year is a crucial one as it sets the table for his first contract extension, Sixers teammate and NBA All-Star centre Joel Embiid, drafted in 2015, last year signed a US$146 million, five-year extension and Simmons would be in line for something similar.

As a self-confident player who has learned from his close relationship with NBA superstar LeBron James, Simmons admits he uses the path James took to super-stardom as a plan for his own career.

“Having LeBron there helps a lot, he has blueprint of what he has been through and done,” Simmons said.

“He has done everything the right way so I’m able to lean on him.”

Observers wouldn’t have taken much notice when Simmons told a young camper last year he aimed to win the MVP award and rookie of the the year.

“I locked up one of those,” Simmons said when reminded of the comment.

“The next one is MVP but I’m just taking it day by day and enjoying it.”

This season is perhaps the most anticipated in Philadelphia since Allen Iverson was dominating the league in the early 2000s and with James now with the LA Lakers in the Western conference, the Sixers are rated a good chance to make the Eastern conference finals with Boston Celtics projected as the favourite.

But the Sixers start their season with a preseason game against NBL champions Melbourne United in Philadelphia on September 29 [AEST] and Simmons won’t let the Australian side be under-rated.

“That is going to be a lot of fun,” Simmons said.

“Especially as I know that is a good team and my teammates will be looking at them like “we are in the NBA, no one can compete with us” but I know they are going to give us a good game.

“I’m pretty sure Melbourne played Oklahoma City last year and I think it was a one point difference in the end.

“Basketball here is great, there is a lot of talent and guys can play the game.”

“He is a professional and Ben will tell you that every game he steps on the floor, he is trying to win,” Dave Simmons said.

“With [Sixers coach] Brett Brown there as well, there will be a lot of extra motivation for all of them.”