For the Quick Guide to 2018 Bledisloe Misery, downcast Wallabies fan, we can examine two moments of Kurtley Beale body language.

The first comes 25 or so minutes into the match on the back of a barnstorming break from Tatafu Polota-Nau, Australia's homecoming hooker, a pop back to Lukhan Tui, an offload to Will Genia and a pass to Beale for which he isn't prepared. The ball bounces off his chest and the opportunity vanishes in a puff of swirling smoke. 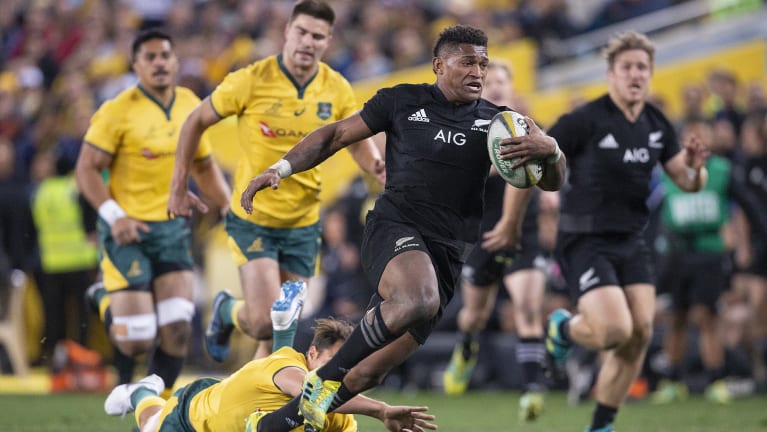 Running wild: Waisake Naholo heads to the try line as the All Blacks race through the gears in the second half.

Beale slams down the ball and grins when a teammate comes over to console him. He knows it was a chance wasted but there'll be more. The Wallabies are looking good.

The second comes 20 minutes later. The All Blacks are leading 12-6 but it's still tight. Australia attack, Bernard Foley makes a break but two forward passes later and it's all for nought. Again. Beale slams down the ball in disgust.

Australian fans can empathise. For 40 minutes it looked as though the Wallabies would give the truth to the oldest of football cliches: defence wins games.

They were 6-0 up for the first 38 minutes of the match thanks to the most cohesive and aggressive effort defence coach Nathan Grey has managed to procure from his players. 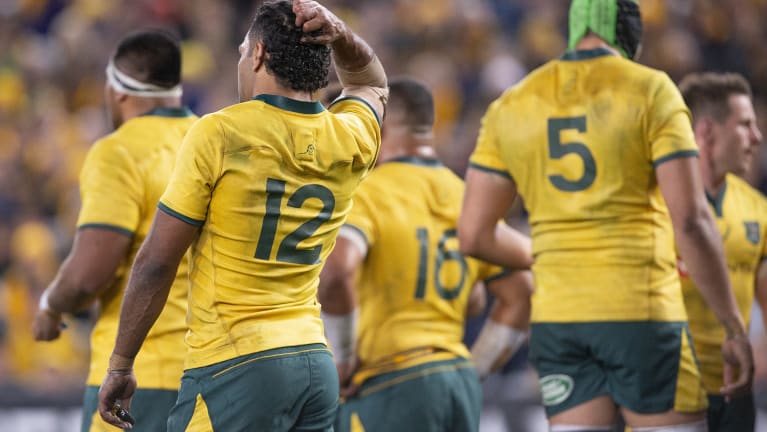 The All Blacks were under all sorts of pressure and frequently crumbling or, more accurately, fumbling, under the weight of it.

New Zealand No.10 Beauden Barrett was copping fierce traffic and missed a shot at goal that would have put his side on the board in the 38th minute.

But the briefest let-up and they were through and, well, it was the floodgate moment. Another three tries came in the first 23 minutes of the second half and just like that, it was same old story.

Sydney youngster Jack Maddocks scored a try on debut to keep the Wallabies in touch, 26-13 after Foley's conversion, but a double from winger Waisake Naholo … 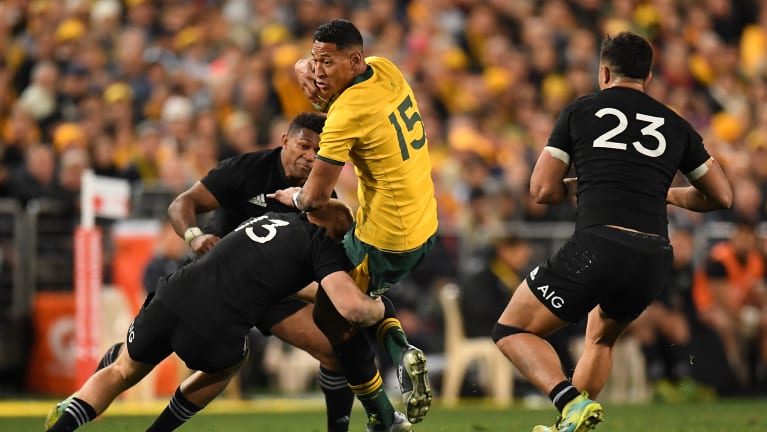 Casualty: Israel Folau is tackled by Jack Goodhue before the fullback left the field with an injury.

Good things are brewing in camp Wallaby, no word of a lie. Michael Cheika has turned over two-thirds of the team he inherited from Ewen McKenzie, assembled a forward pack Australians can believe in – that first half is a case in point – but they still can't put the pieces together.

How much time do they need? It must be as frustrating for the Michaels – Cheika and Hooper – as it is for the fans.

It doesn't matter how different the first half was from the same 40 minutes a year ago at this very ground. The Wallabies conceded 40 points in the first half last year and 33 in the second half this year. Game of two halves, alright. Same old problems.

Last year's diabolical opening stanza was as poor a first half as you were ever likely to see from an Australian side, and so the same can be said of their second half on Saturday. So what of all the lessons this group have absorbed over the intervening 12 months of Test rugby? The thriller in Dunedin, the win in Brisbane and the three-Test arm wrestle with Ireland in June?

For every good carry, pass, kick and run there were two horror shows on the return. The All Blacks ran rampant in the second 40 and this team – these players who speak passionately about belief – let them.

Barrett shrugged off the first-half pressure to consign the Richie Mo'unga talk to the dust bin this week. Brodie Retallick let everyone know he was home from France and Kieran Read – save for a rusty breakdown penalty in the first half – delivered a timely reminder to his teammates that they were the No.1 Test nation playing the No.5 team. 'Bugger this 6-5 rubbish at half-time. Let's show them who we are.'

Injury to Israel Folau will add salt to the many wounds the Wallabies will lick on their flight over to Auckland on Sunday. They are headed for a paradisiacal island off the mainland and they will be glad of the isolation come review time.

The only Aussie who went home happy was the bloke who kicked the ball through an impossibly small ring in the boot of a flash SUV on the field at half-time and got to drive the thing home that night.

He was probably a Kiwi.