Home » Sport » Blues eye big fish, friendlier draw to get back to competitiveness

Carlton are eyeing not just a priority pick but a friendlier draw and a major trade target or two as they seek a return to competitiveness in 2019.

A tortured two-win season has thrown the Blues into the mix for a league handout – and specifically a priority pick in November's draft. 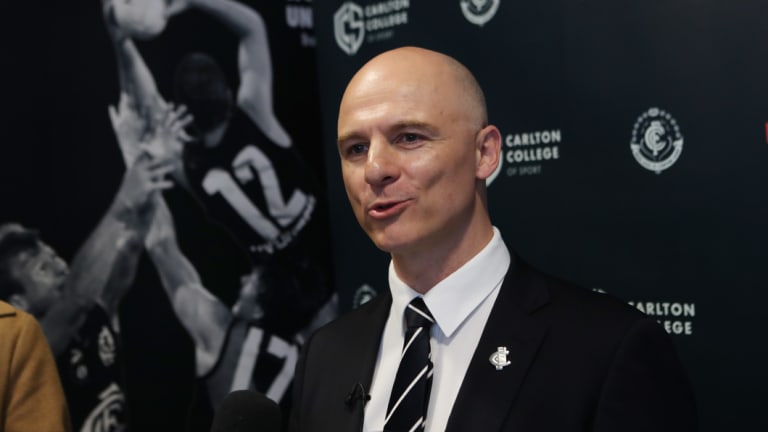 Carlton CEO Cain Liddle says there are a number of ways to make the Blues competitive again.

Club chief executive Cain Liddle revealed on Friday that any assistance heading their way was likely to be much broader than another first-round selection.

The Blues presented to the AFL Commission on Wednesday at a routine meeting between club and league where the subject quickly turned to improving Carlton's on-field fortunes.

"The AFL has a number of equalisation levers … special assistance can take a number of forms," Liddle said on Friday.

The AFL has not required Carlton to formally ask for a pick, instead asking the club to lay out their situation for their consideration.

Liddle said their presentation was well received, with feedback expected in the next fortnight.

Of the differing avenues for support, Liddle was most certain that relief could be coming from the draw.

"I don't think I'll be seeing too many Friday night games. We accept that. We have to take our medicine. We won two games," he said.

"What I'm hoping that the AFL don't forget we've got a number of traditional rivalries with big clubs that we don't want to lose.

"If it's not going to be Friday night … they might be on Saturday afternoons."

The Blues have strung together five seasons without winning more than seven games, and an astonishing 55-match run without hitting 100 points.

Liddle said landing a big fish – like wantaway Crow Mitch McGovern – could be something to get Carlton fans fired up for 2019.

"Three years ago we came up with a plan to go to three drafts. It looks like we've done a reasonable job of that in terms of the players we've brought in," he said.

"I don't think there's any doubt, and [list manager Stephen Silvagni's] very clear view is we need to more to a more balanced approach.

"We've got a bit of a gap in the 22- to 26-year-old age group. We need to start filling that gap with some talent with players that have done their three or four pre-seasons."

He poured cold water on the idea to allowing struggling teams priority access to state league talent in that age bracket.

"People refer to Tim Kelly and these gems sitting out in the state league. I'm not sure there's a Tim Kelly sitting out there every year," he said.