He's dazzled in front of the cauldrons of Beijing, London and Rio de Janeiro but a suburban football ground in Sydney's outer suburbs could be the scene of the final chapter of Usain Bolt's sporting career.

On Friday night at Campbelltown Stadium, the eight-time Olympic gold medallist will have to put on one the most impressive performances of his career to make the successful transition from sprinter to footballer. 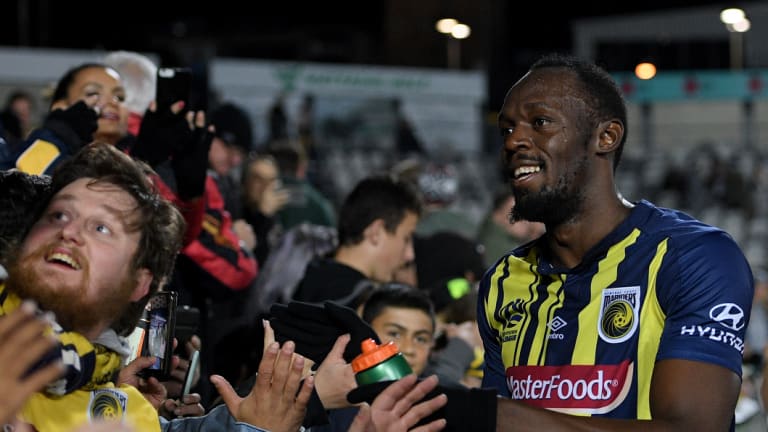 Fan favourite: Reactions have ranged from harsh to kind after Usain Bolt’s debut, but the Mariners fans enjoyed the spectacle.Credit:AAP

Bolt will be included in the starting team for Central Coast Mariners' friendly against a National Premier League combined team representing Sydney's south-west.

The Jamaican sprinter will spearhead the Mariners' attack against Macarthur South West United at Campbelltown Stadium on Friday night in a match Bolt must show significant signs of improvement in if he's to land a professional contract by January.

It will be the first time Bolt will start a match with a top-tier, professional football club. Now in a much fitter and better condition than when he arrived, it's understood the Mariners hierarchy will need to be impressed by his progression if they're to remain eager to offer him a permanent contract. They are not expecting goals and a dominant display as much as major advancements in his performances since when he first arrived at the club in early August.

His hopes of impressing in Campbelltown have been dealt a major boost by Mulvey. While Bolt will be deployed as the Mariners' centre-forward he will be partnered in attack by Central Coast's biggest recruit this season, former Melbourne City and, Leeds, Fulham and Aston Villa striker Ross McCormack, who will play in a slightly deeper role. Bolt will receive service from Tommy Oar, the former Socceroo and member of the 2014 World Cup squad, who is pencilled in to start the match on the left wing.

"It's all about the collective and how we'll be ready for the start of the A-League season," Mulvey said.

It will be no surprise to learn his tactical instructions will revolve around his pace and height. The fastest man in the world will be given the freedom to run behind the defence and instructed to look to space where he can exert his unrivalled speed.

"We want him probing behind defenders without the ball so we can play the ball into space behind the defenders and can get him on the end of crosses and through balls," Mulvey said. "If you're talking about him per-se, with the physique he has which is six-foot-five, defenders are not going to be too close to him. They'll want to stand off him a little bit. He can stretch the opposition and give other players space to play."

While the club will be analysing Bolt's progress, the Mariners coach just wants to see "a smile on his face" at the end of the game, with the 32-year-old still working his way towards peak condition.

"I think it's really worth nothing that when he came to the club, he was not fit," Mulvey said. "He hadn't done anything, he had been a retired athlete for a number of months. Even though he's a world-class athlete, he didn't come with world-class fitness. We improved his level of fitness, he was complicit, he worked really hard and got fit. Then you need to have football fitness."