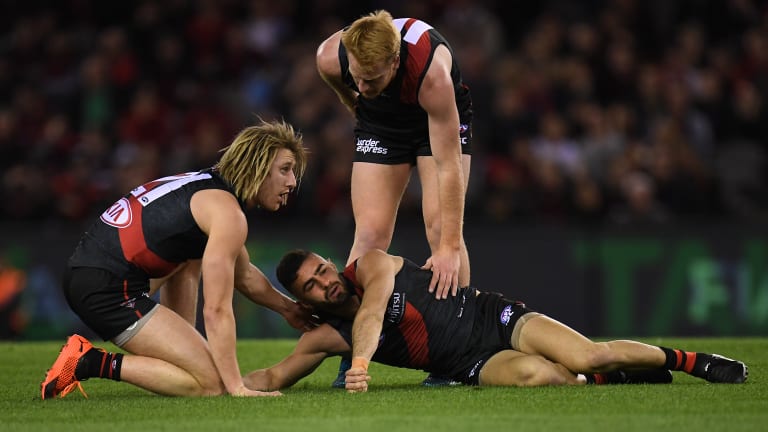 Essendon's bid to remain in the finals hunt was made that much harder when it lost two men to injury before quarter-time in a spiteful clash against St Kilda at Etihad Stadium on Friday night.

Veteran defender Brendon Goddard hurt his knee having landed awkwardly in a marking contest, raising fears he had torn his anterior cruciate ligament, while running defender Adam Saad was stretchered from the field after he was crunched by Nathan Brown.

Saad had released a handball to teammate Anthony McDonald-Tipungwuti, with the ball about 10 metres away, when he was flattened by a high bump from Brown. He appeared to take a hit to the head and another when he hit the turf. He was put in a spinal brace and then onto the stretcher.

AFL great Chris Judd said Brown faced at least a two-week suspension. "Any time you get contact like that, there are going to be some issues there," he said on Triple M. 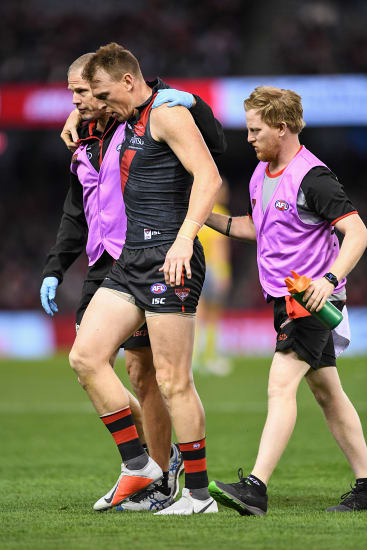 "It was just very late – the ball was probably 10m away when contact was made. There will be some questions to answer."

Former Richmond forward Nathan Brown said it was a "pretty nasty bump", with the Saint facing a two-week ban.

Saad eased concerns about his health when he acknowledged the crowd's support by raising both hands as he left the field.

The Bomber returned to the bench in the second quarter but the club confirmed his match was over.

Goddard's injury not come have come at a worse time for he is off contract this season. It initially appeared as if he had hurt his ankle but he was forlorn figure when he had his knee wrapped in ice.

The injuries left the Bombers with only 20 fit men. With three rounds remaining in the season, they had to defeat the Saints to maintain their flickering finals hopes.