A bookmaker has offered bonus bets to customers who backed any horse which ran second to a Darren Weir runner last year as a wagering industry chief lashed Racing Victoria's product fees given recent integrity scandals.

Just hours after Melbourne Cup-winning trainer Weir was rubbed out of the industry for four years at a Racing Appeals and Disciplinary Board hearing on Wednesday, Ladbrokes extended an olive branch to clients. 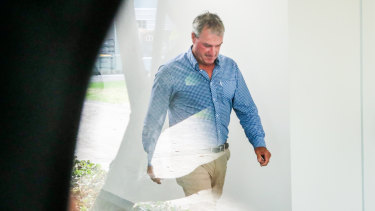 It pledged a $20 bonus bet to customers which had finished runner-up to a Weir horse in 2018 as part of a "Darren Weir Group 1 Goodwill" scheme.

It comes as BlueBet boss Michael Sullivan argued the Victorian industry's recent slew of bad headlines stemming from the cobalt scandal, Aquanita affair and now Weir saga had made a mockery of their nation-leading product fees.

"They are the most expensive jurisdiction in the country [for race fields fees] to start with and they have virtually single handedly closed down my high rollers business because of the way they tax us," Sullivan said.

"Their biggest statement back to us is, 'we're the most expensive because we have the best integrity'. Yet in the last two years we've had the Robert Smerdon case and now Darren Weir.

Where is their duty of care, not just to me but the punters that bet with me? That's my underlying problem. In our sport that's what we need

"Where is their duty of care, not just to me but the punters that bet with me? That's my underlying problem. In our sport that's what we need."

"I don't believe there is anything rotten with racing in the state of Victoria," Thompson said. "These are matters that came to light before the stewards and were dealt with accordingly.

"Both cases [Aquanita and Weir] were extremely high profile and have gained significant interest. However, we have the resources in place and the commitment to ensure the integrity in our sport is maintained.

"It sends a very clear message for everybody in racing, integrity is fundamental to our sport and the welfare of horses is too – we take this extremely seriously."

Weir was emotional as a three-person RAD Board panel imposed a potentially career-ending disqualification on Australian racing's record breaker after he elected not to contest three charges of possessing an electronic shock apparatus, commonly known as a "jigger".

Victoria Police, who launched the twin raids on Weir's Ballarat and Warrnambool properties with stewards last week, are continuing investigations into the stable practices and potential of corrupt betting outcomes. 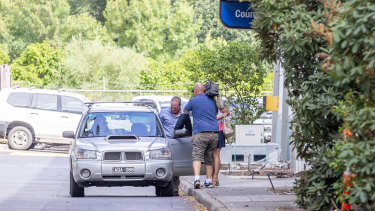 Gone: Darren Weir leaves the hearing which could have ended his career.Credit:AAP

The Herald revealed investigators took a high interest in August’s Grand National Hurdle, won by a well-backed runner from the stable of Jarrod McLean, who was Weir's foreman in Warrnambool and facing his own charges from RV.

Weir has 10 days to disperse his hundreds of horses under the terms of his disqualification.

"Mr Weir will not be permitted to participate in the racing industry in any way over the four-year period, including, but not limited to his participation in the training of horses, attending race meetings and licensed premises and deriving any benefit from the industry," RV's executive general manager integrity Jamie Stier said.

"In the interests of Mr Weir’s owners and staff and the welfare of horses, the stewards have granted permission for licensed trainer Michael Leonard to assume care of Mr Weir’s horses for a period of up to 28 days whilst discussions continue for a permanent solution."

Leonard will not be able to enter the horses for any race or barrier trial.

Melbourne Cup-winning syndicators Australian Bloodstock, arguably the biggest supporter of the Weir empire, has been forced to spread their horses previously trained by the 48-year-old across the country.

Kris Lees, Chris Waller, Tony McEvoy, Anthony Freedman and Phillip Stokes have all taken over the care of horses raced by Australian Bloodstock, which won the Melbourne Cup with German import Protectionist just a year before Weir's Prince Of Penzance stormed to victory in Australia's great race.