Bianca Elmir has always walked to the beat of her own drum. Her boxing career has caused angst within her family, but on this night it was her way to bring them together.

Elmir (2-0) dedicated her third-round stoppage win over Wendy Talbot (0-5) to her late grandmother Amira Rahman at Capital Fight Show 15 at the Hellenic Club in Woden on Saturday night. 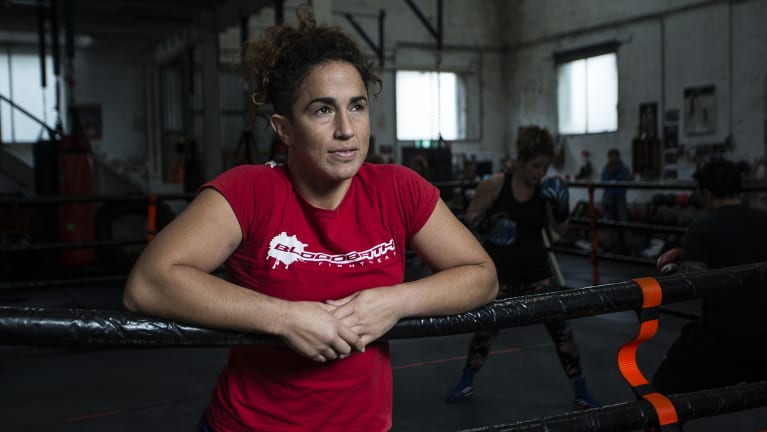 Bianca Elmir is breaking down barriers.

The outspoken 36-year-old was originally slated to have a shot at the Australian flyweight title before an injury to defending champion Kori Farr halted that dream.

But she was never going to be short of motivation against New Zealander Talbot, riding a wave of emotion and breaking down in the ring as she dedicated the bout to her beloved grandmother.

"I really was shocked myself by how emotional I got towards the end," Elmir said.

"My mum was in the audience, so was my cousin, it was really important and out of respect to them as well. I spoke to my mum afterwards and she was just as emotional as I was.

"I am really grateful I could do something like that publicly for my grandma."

Elmir is the focus of a new documentary titled Bam Bam, which followed her quest to be world bantamweight amateur boxing champion and culminated in her representing Australia in Astana, Kazakhstan, in 2016.

Melbourne filmmaker Jemma van Loenen's documentary has just been accepted into the Lady filmakers festival in Los Angeles in September, giving Elmir the platform to share her story about finding herself further around the world. It will also be shown at the Scandanavian international film festival in Helsinki in October, and the Lebanese film festival in Sydney on September 1.

A scene of the documentary depicts Elmir in shorts and a tank top among female relatives wearing hijabs and ankle-length robes. She isn't rejecting her faith – she just expresses it in a different way. 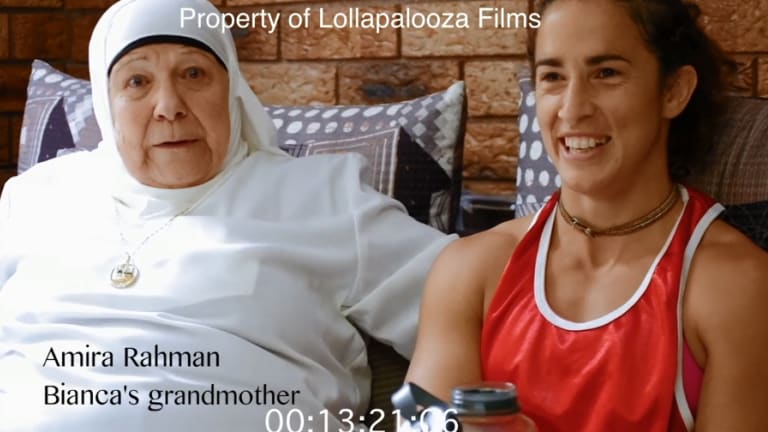 Bianca and her grandmother captured in a still from Bam Bam.

"I want to show that the importance of being authentic to yourself and being self-reflective. We all have our own battles and we are all trying to find our own person and identity," Elmir said.

"Sometimes that requires you to go to some uncomfortable places. That is what it is to be human. It is important to challenge stereotypes and the status quo at times, and I’ve done that in my own way to try to find myself and be who I am.

"Ultimately I have come through and learnt a lot of valuable lessons about who I am, and hopefully other people can be inspired within their own journey, even if the pathway is really challenging at times, which it has been for me."

Elmir is two fights into her professional career and riding a wave of support from the Canberra community that she is eternally grateful for, she is still struggling to find sponsors. She has been disappointed so many times she is almost reluctant to seek sponsorship.

“It’s just like a bloody dead end, that’s how it feels," Elmir said.

But she isn't letting that hold her back. Elmir has set her sights on the undercard of the impending bout between former world champion Jeff Horn and Anthony Mundine, which is slated for Suncorp Stadium in November.

To be the face of the rise of women's boxing in Australia would mean the world to Elmir, who puts on a show with every ring walk – she was accompanied to the squared circle by samba dancers on Saturday night.

"I’m going to lobby the shit out of that, that’s going to happen," Elmir said. 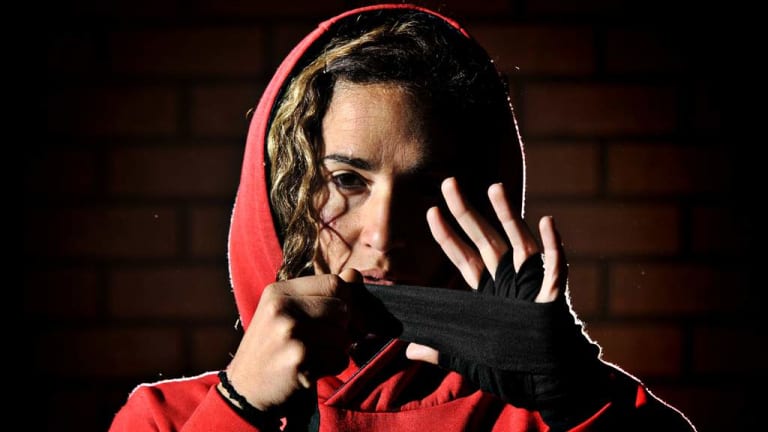 Bianca Elmir is eyeing the biggest stage in Australian boxing.

"It would be finally getting on the map as a female athlete, as a female representative in boxing, and it would really put it on the map to demonstrate that female boxers can put on a good show.

"Australia needs to get on with the agenda now anyway because the rest of the world are showcasing female fighters in so many different areas. Women’s sport is only increasing in exposure and increasing in popularity.

"I’m just trying to do my own thing and do it to the best of my ability. Imagine if I got the opportunity to get on a bigger stage like Suncorp Stadium in Queensland on such a high-profile event.

"I would absolutely revel in that experience and I would make the most of it. I would put on a good show."