Fremantle youngster Andrew Brayshaw says he forgives Andrew Gaff for the punch that broke his jaw, but he wants to discuss the incident in person.

Brayshaw underwent surgery on his jaw on Sunday night after copping the off-the-ball hit, and he could lose up to five teeth. Gaff was suspended for eight weeks over the incident.

Brayshaw says his brother, West Coast's Hamish Brayshaw, helped convince him that Gaff's punch was out of character. 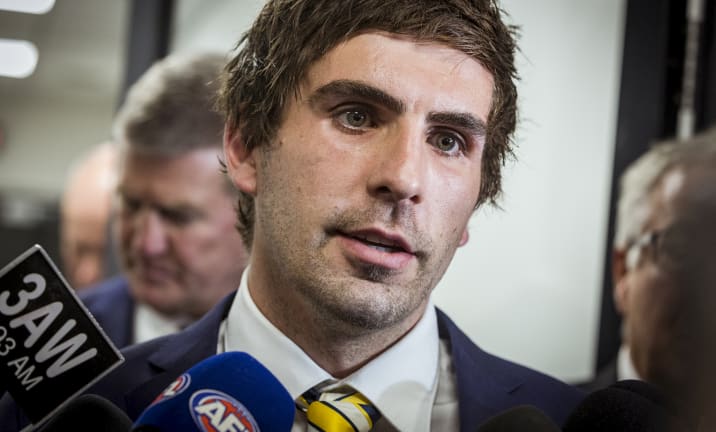 Brayshaw has returned home to Melbourne to recover under the care of his parents, but he will meet Gaff over the coming weeks.

"The action itself is horrific. But the person that Andrew Gaff is, I forgive him and I'm not going to hold a grudge against him as a person," Brayshaw told the Seven Network.

"I don't think he intended to [hit my face]. And having watched his post-tribunal interview and post-match interview, it seems like he is showing care and he genuinely does feel sick about what happened.

"[A] good bloke has made a bad mistake.

"I've been going up and down with emotions throughout the last few days, but I've come to the conclusion that as a person I'm not holding any grudge towards him.

"I actually look forward to meeting him. I want to hear it from his perspective and just see what was going through his head."

Brayshaw hopes the scrutiny on Gaff will now subside.

"A good man making a bad error, I don't think he deserves to be put under any more scrutiny," Brayshaw said.

"He's living with the weight of what has happened on his shoulders for, I don't know how long, but I just definitely want to move on from this and not take it any further.

Brayshaw won't be able to eat solid food for the next four weeks, and he thinks his pre-season for 2019 will also be slightly affected.