Brisbane have wrapped up the inaugural NRLW minor premiership, knocking the Warriors out of grand final contention with a 32-10 victory on Friday night.

Having already all but qualified after defeating both the Sydney Roosters and Dragons in the opening two rounds, the Broncos ran in six tries to two in a dominant win at AAMI Park. 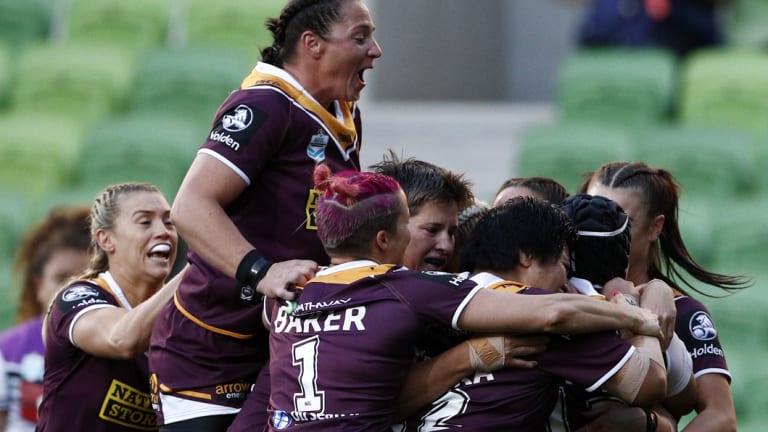 Minor premiers: The Broncos celebrate after Julia Robinson scores against the Warriors at AAMI Park.

The result bumped the Warriors down to last, meaning the Broncos will meet the winner of Saturday's clash between the Dragons and Roosters in next Sunday's grand final.

After they led 16-10 at half-time, the Broncos ran in three unanswered tries in the second half to capitalise on a wealth of possession.

Hooker Brittany Brealey was the star, setting up two tries and scoring one herself with a 40-metre dash out of dummy-half to get the Broncos firing after the break.

Winger Julia Robinson also bagged a double, the first off a wonderful set play from a scrum where Brisbane caught the Warriors short down the blindside.

However, the win may have come at a cost with Kiwi Fern second-rower Maitua Feterika carried off the field with a nasty looking knee injury.

The 26-year-old had earlier been one of the Broncos' best, busting through six tackles before she was injured early in the second half.