This was a far bigger show of faith in Wayne Bennett than any barbecue-off with Broncos boss Paul White. With victory over South Sydney, the Broncos still have a pulse in 2018, while the Rabbitohs have developed a case of the late-season wobbles.

Amid the coaching mayhem that now seems to dominate every discussion about the NRL, the Broncos had to prepare for a match that may well have decided their fate this season. Bennett may be at Red Hill next year, he may not. But they are playing for their coach regardless. 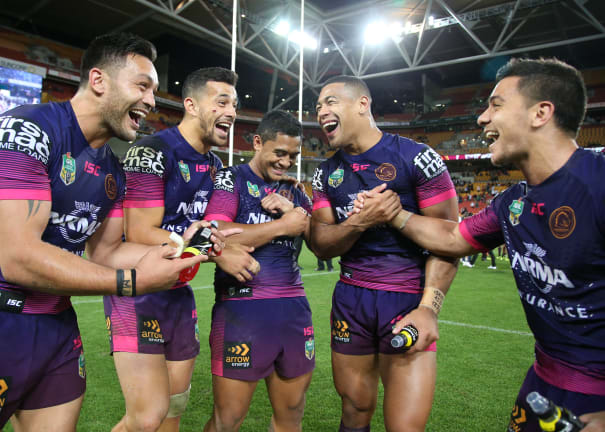 Giddy up: Broncos players celebrate their crucial win against Souths on Thursday night.

The final score of 38-18 didn't communicate the wild momentum swings that made this nine-try extravaganza a game within a game. Souths were dire in the first 20 minutes, with the Broncos screaming out to an 18-0 lead.

Then Souths produced some of their crispest backline play of the year, even without Greg Inglis and Alex Johnston. They levelled it at 18-18 after 53 minutes and looked like they could add another 18 at will, such was their control at that point.

Then it swung on its head once again. Corey Oates collected his third try, then boom teenager David Fifita showed extraordinary strength to wrestle and spin his way over in the corner and ice a win that has likely saved their finals aspirations.

Kodi Nikorima raced away with an intercept near full-time to blow it out to 38-18, leaving the Rabbitohs with back-to-back defeats heading into next week's clash with the Raiders.

If anything was going to indicate whether Brisbane's players were still in the corner of their coach, it was Thursday night against one of the premiership fancies. Had this gone wrong, it could have been nasty for the Broncos. Instead, Anthony Seibold – a man that could end up at Red Hill in 2020 – is the one that has some contemplation ahead of him at Redfern.

Whether this was a short-term emotional bump for the Broncos or a longer-term rebound heading towards the finals remains to be seen. But it was clear from their intent and early drive that they were anything but a group lost among the endless speculation as to who will be their commander next season and beyond.

Anthony Milford was troublesome all night and Oates was a powerhouse to the extent you wonder why Brisbane would ever want to let him go. And Fifita, along with Tevita Pangai Jnr, continued to be a pair of walking advertisements as to the promise that lies within the team.

The Rabbitohs, fresh from a loss to the Roosters, would pay a heavy price for their dire start. After 20 minutes, they had completed just four of eight sets and trailed 520m-191m in run metres. Brisbane had three line-breaks, Souths had none. The error count was 5-1.

Finally, the visitors had a sniff and made it count, with Richie Kennar scoring to make it 18-8 at half-time.

He scored his second soon after the resumption and when Hymel Hunt completed another delicious back-line shift, it was all square at 18-18. 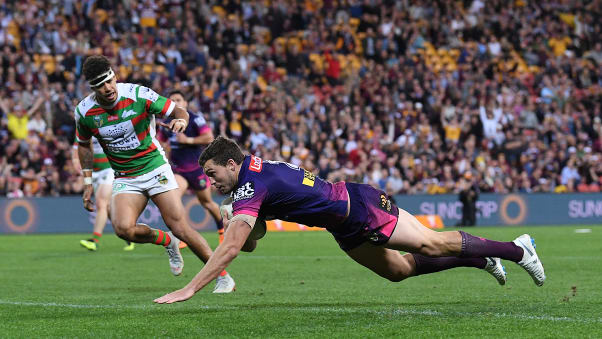 The heavy turnout of red-and-green jerseys in the crowd had reason to be bullish. Souths were beginning to dominate through the middle and Damien Cook was becoming more crafty by the moment.

Then, it spun on its head once more. A penalty, some field position, a lovely Milford kick and Oates was over once again. Then Fifita defied a wall of defenders to get his first try in the NRL.

With talent still on the sideline, Souths won't be hitting the panic button just yet. But leaking so many points at the pointy end should have Seibold working overtime as he guides a side that has surprised so many towards the post-season.