A team of cleaners grabbed a bunch of rags and raced around a sun-soaked Canberra Stadium on Friday, hand-washing every one of the 25,011 seats before the ACT Brumbies season-opener.

The challenge for the Brumbies and their fans the seats get filled this year after slumping to the lowest average crowds in the club's history last season. 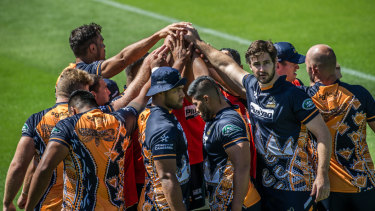 All for one: The Brumbies hope Canberra fans will back them this year.Credit:Karleen Minney

Making an excuse to skip Brumbies or Canberra Raiders games has become far too easy in recent years, leaving both clubs to continually watch the numbers tick over at the gate.

The Raiders have enjoyed a resurgence since 2016, growing their membership base and average attendances to buck the trend of most NRL teams.

The Brumbies have spent most of their time trying to pick up the pieces of Australian rugby and convince fans they've got a product that's worth being at the stadium for.

But they hope this year is a line in the sand moment. No more excuses about the cold weather or the last-minute trip to the beach. The Brumbies want to entertain, but they need people in the stands to entertain.

"We've done a really big effort on and off the field over the last couple of months to make sure people are aware of the Brumbies and the community.

"We want to tell the story of what we're trying to achieve. Hopefully that converts into people getting out to [Canberra Stadium] to get out and support the team."

Numbers for the round-one clash against the Melbourne Rebels are tracking towards somewhere between 8000 and 10,000 fans. The Brumbies hope the warm February weather will help them push higher. 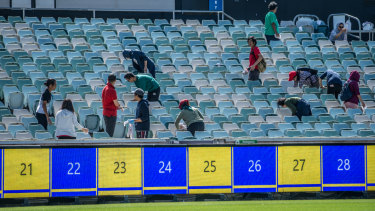 The cleaners put the finishing touches on at Canberra Stadium on Thursday.Credit:Karleen Minney

Passing 5283 should be the first target. The Brumbies game against the Rebels last year lured just 5283 people to Canberra Stadium last year on a chilly night in May.

It was the second lowest crowd in Brumbies history and contributed to a record low average of 8391 per game for the season.

The Brumbies' cause hasn't been helped by some Australian rugby flops, including the bungled axing of the Western Force two years ago and the Wallabies woes last year.

But there is genuine optimism for this season and you only have to look at both the Brumbies and the Rebels sides to see why.

Fourteen of the Rebels' starting XV have either played for the Wallabies or been a part of Test touring squads. The Brumbies are not far behind, boasting 15 capped Wallabies in their game-day squad and two who been involved in camps.

Australian rugby is also getting a headstart on their rivals. The NRL and AFL are still in pre-season mode, giving the Super Rugby franchises a four-week window to shine.

There is undoubtedly still an appetite for live sport in the capital. The Canberra Capitals sold 3600 tickets in eight hours on Thursday as they prepare to host a WNBL grand final on Saturday.

The Brumbies have also ticked over more than 10,000 members for the season, including junior and senior players, and hope they can convince people to jump back on board.

"People like to come and support a winning side," Thomson said. "We wanted to make the most of our first month at home and really get the fans and supporters behind the team."

Coach Dan McKellar, who signed a two-year contract extension on Thursday, said: "I think it's going to be 28 degrees on Friday. Maybe around 21 or 22 by 7.45pm … we get to start in front of our fans. Hopefully we can get a good crowd, I know the style we want to play really resonates with the Canberra community."

SUPER RUGBY ROUND ONE