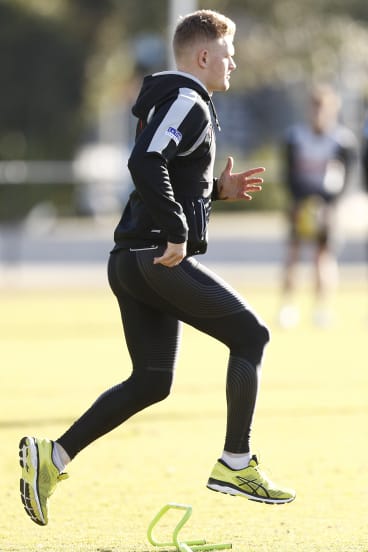 Collingwood coach Nathan Buckley remains hopeful that injured pair Adam Treloar and Ben Reid will still be able to feature again at some stage this season.

Both players are in a race against time to return to the field. Treloar is recovering from a serious hamstring injury suffered eight weeks ago, while Reid re-injured his calf in the VFL on the weekend after being sidelined for three months.

Their chances of playing again in 2018 have been enhanced by the fact that Collingwood’s season is all but assured to feature at least one final, but their returns remain far from guaranteed.

“ ‘Ads’ has knocked on the door a couple of times this week, but I said, ‘Mate, you’ve come to the wrong bloke’,” Buckley laughed.

Despite reportedly being ruled out for the rest of the season, Reid hadn’t given up hope of playing his first game since round 10 in the coming weeks, according to Buckley.

“He’ll be continuing to work and while we’re live and while we’re a chance, there’s plenty of players that are going to be trying to prove their fitness and contribute as best as they possibly can,” he said.

“Reidy was going to play on Charlie Dixon this weekend and neither of them are playing, so I suppose that says a little bit about expecting certain things to happen.

Buckley chuckled while lamenting the lengthy injury list his club has to endure for most of 2018. “We’ve all got our best laid plans and invariably you’d like to see some of them come to fruition.”

Star defender Jeremy Howe appears on track to face Fremantle in round 23 despite being ruled out once again for the Pies’ clash against Port Adelaide at the MCG this week after taking the unusual step of having surgery on his corked thigh.

But Tyson Goldsack still has work to do to prove his fitness as he continues to deal with back issues which developed shortly after completing his rehabilitation from a ruptured ACL which required a knee reconstruction in the pre-season.

In better news for the Magpies, Buckley said small forward Will Hoskin-Elliott will be right to play despite leaving the training track gingerly on Thursday.

With both Collingwood and Port Adelaide both yet to lock in finals spots, the match looms as a crunch encounter and Buckley doesn’t want his team to leave anything in the tank. 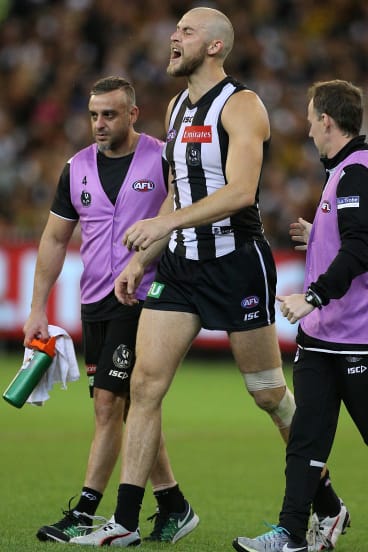 “You don’t want to be looking back saying, ‘What if?’ So the challenge for us is to take that mentality into every week,” Buckley said.

“We’re coming up against a side who we know are fighting for their finals survival and we’re only one game ahead of them so, in many ways, we’re fighting for ours as well.

Buckley said the likes of Josh Daicos, Jarryd Blair, Alex Fasolo, Callum Brown, Sam McLarty and Nathan Murphy were all in the mix to be picked this week.

The game will serve as Collingwood midfielder Travis Varcoe’s 200th and the former Cat has relished his move from Kardinia Park four years ago.

“It’s been great for me,” Varcoe said.

“Different age group, I guess. So I’ve sat at the top end the whole time I’ve been here but I was at the other end at Geelong so I guess it was more to find a bit more out about myself and I’m fortunate enough to extend the career so I’m forever grateful.”

Meanwhile Buckley was hopeful that out-of-contract forwards Fasolo and Jamie Elliott would sign new deals to stay at Collingwood.

Elliott has missed the entire year with hamstring issues and has only played 17 games in three seasons, while form and an ankle injury have restricted Fasolo to just one game in 2018.