Bontempelli is contracted until the end of 2019 but discussions are progressing between his management and the club. The champion utility could opt to sign a two-year extension, allowing him to test free agency after the 2021 season. 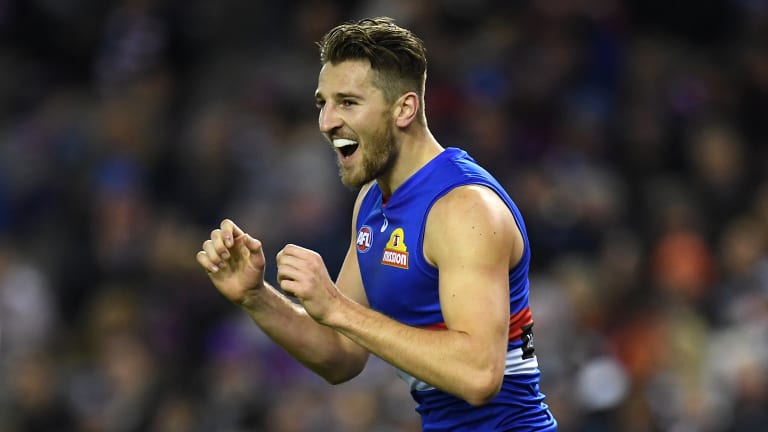 "I do have a year to run still. The conversations are ongoing with the club and my management. It's a real positive position at the minute and that will get done in due course," he said on Tuesday.

"There is not set time limit on it. As far as I know, the talks are going well and they are ongoing. They just take time … I am sure it will get done sooner rather than later."

The match-winning Bontempelli, who has re-emerged as a major goal-scoring threat in recent weeks, remains the Dogs' key re-signing but their focus is also on uncontracted free agents Jordan Roughead, Mitch Wallis and Luke Dahlhaus.

The Age understands St Kilda have shown strong interest in Roughead, while Wallis and Dahlhaus have been linked to other clubs, including Carlton and Essendon.

Bontempelli said they all wanted to remain at Whitten Oval.

"As a player, a teammate and friend, you all hope they stay and that's the way it plays out but we are all understanding the way football works," he said.

"There is list turnover at end of every season but … we have been through a lot together, we are such tight knit group, we hope everything can get sorted out and they can be around for as long as they can."

The Bulldogs have endured another frustrating season, which has in part been derailed by injuries to key personnel. However, they have won their past two matches – against St Kilda and finals hopefuls North Melbourne – and a third looms against bottom-placed Carlton on Sunday. Having struggled to score after half-time for much of the season, the Dogs have booted a combined 16 goals in third quarters in the past fortnight.

"It's a shift in mindset and being able to control that game, that third quarter, a bit better. We certainly focused on wanting to come out after half-time with a better presence and a better influence and, funnily enough, we have had our two highest scoring quarters in third quarters. It's a great showing of what we have been trying to do," Bontempelli said.

Midfielders Lachie Hunter, Jack Macrae and Bontempelli were superb against the Kangaroos, while veteran Tory Dickson was a threat up forward.

"It's big for your relief and confidence in what we have been doing … it's a great sign for the spirit of the group that we are able to continue to fight out the rest of the season despite the finals carrot not being there for us this year," he said.

"Obviously, it's disappointing to not have featured in the finals over the last two years after what we achieved back in '16 but we are still so young, we are a maturing group and there are still a number of challenges you have to face each year despite what you have achieved in the past," he said.

The Bulldogs unveiled their inaugural reconciliation action plan on Tuesday, with club president Peter Gordon describing it as an "important moment in the history of the club".

Gordon said the Dogs had had 19 players of indigenous or Torres Strait Islander descent and had made great strides in being more inclusive.