Melbourne Storm have named captain Cameron Smith to start against Gold Coast Titans on Saturday despite his struggles with a back injury.

Smith was selected in his regular role at hooker when the Storm named their extended squad on Tuesday and have called in replacement players as well after injuries saw Suliasi Vunivalu (hamstring), Nelson Asofa-Solomona (ankle) and Brandon Smith (knee) all forced out and Will Chambers suspended for three games. 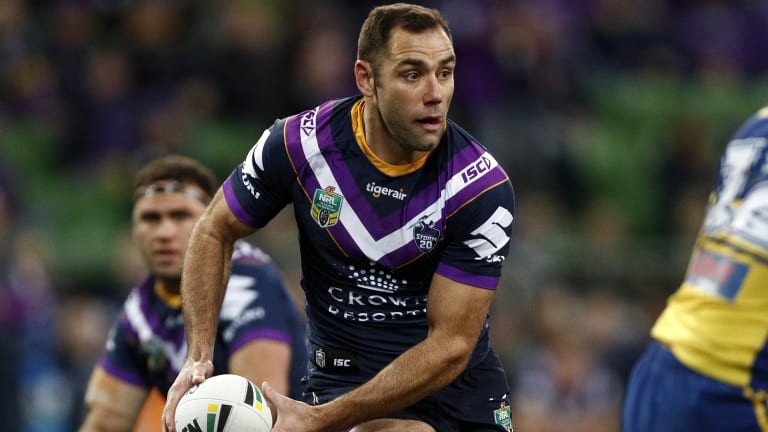 Skipper Cameron Smith has been named in the Storm squad despite battling a back problem.

The Storm named Cheyse Blair on the wing in place of Vunivalu, Justin Olam at centre in place of Chambers and have prop Tui Kamikamica and playmaker Ryley Jacks on the bench.

The Storm remain in top spot on the ladder and won’t risk Smith if he can’t prove his fitness this week while promising young back Scott Drinkwater, props Sam Kasiano and Albert Vete, plus injured back Jahrome Hughes (knee), are in the squad as reserves and could well end up in the final 17.

Hughes missed last week’s game due to a knee problem and, like Smith, will need to train strongly this week to prove he can handle returning this Saturday.

But by naming both injured players they remain eligible to play on Saturday, so it shows the Storm see some chance of them suiting up.

Brodie Croft has been named at starting halfback and he will want another week to press his case to remain in the side for the finals despite Hughes showing excellent form in the second half of the season across several backline roles.

The Titans have named a relatively stable side with stars Jarrod Wallace, Ash Taylor, Nathan Peats, Brenko Lee and Kevin Proctor all poised to ask big questions of Melbourne’s newcomers.

The Storm play the Titans at CBUS Super Stadium on Saturday at 5.30pm.