Home » Sport » Cameron Smith: 'We got in trouble for not slowing down the play-the-ball enough'

Souths captain Sam Burgess stands in the in-goal area after Storm winger Josh Addo-Carr has scored in the corner, giving his side the lead.

Burgess is in the face of referee Ashley Klein, complaining about the video referee’s decision to award the try after halfback Adam Reynolds was taken out by a decoy runner. 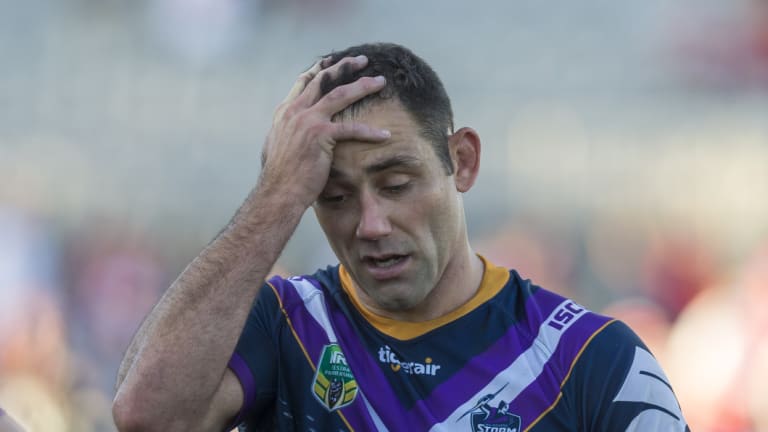 Storm captain Cameron Smith … or, as rival teams call him, the Human Octopus.

He wasn’t winning that one, so he changed tack.

"You've got to address the wrestle,” he demanded of Klein with the conversation being picked up on the broadcast audio.

It’s not the first time Burgess has complained during the run of play about the Storm’s tackling techniques. He did it during the loss in Perth in May last year when he grumbled to referee Gavin Badger about choke holds and the third man spearing into his back and that of teammates.

And now they are doing it again, apparently, and the match is only 19 minutes old …

That was a month ago when Souths hosted Melbourne at ANZ Stadium.

The Rabbitohs ended up winning 30-20 that night, mostly off the back of lightning-quick play-the-balls and mesmerising dummy half play from hooker Damien Cook.

Whether Burgess’ remarks had any influence on the result is unknowable but Storm captain Cameron Smith was genuinely taken aback when told of the on-field complaint at Monday's captain's call ahead of the NRL finals.

“Against us?” Smith asked, puzzled.

Oh, it's finals time, baby! How do we know? We’re talking about the Storm’s wrestling techniques.

“The whole wrestling thing, it comes up every year,” Smith said. “Every team is doing it.”

He then took a thinly veiled swipe at Souths coach Anthony Seibold, who was once an assistant to coach Craig Bellamy in Melbourne.

“And knowing ‘Seibs’, he would have taken a few defensive programs and strategies up to the Rabbits,” Smith continued. “We’re just going to defend like we do every game. We haven’t been contacted by the NRL or referees this year at all.”

Smith’s right: you can set your watch to stories about Melbourne’s wrestling techniques ahead of headline matches.

Nevertheless, it’s a relevant talking point ahead of Friday night’s qualifying final between the two sides at AAMI Park.

Under former coach Michael Maguire, Souths rivalled the Storm as the game’s most skilful wrestlers.

Under Seibold, that’s all changed. They do everything at pace, from the play-the-ball to their restarts.

Melbourne are still the king of the ruck, slowly it down to the very last nanosecond before they are pinged by the referee. The best at it is Smith, who rival clubs call “The Human Octopus” because of his ability to get his arms and legs entangled with the player trying to play the ball.

It felt like Souths captain Greg Inglis pressed play on a recorded message when he was asked about Melbourne’s ability to slow the play-the-ball.

Smith says the Storm will be boosted by the return from injury of five-eighth Cameron Munster and halfback Brodie Croft. Fullback Billy Slater, who has been unavailable because of a serious family illness, is also expected to play.

They are timely inclusions because no defending premier has won in week one of the finals since 2004.

"Thanks for telling me that,” Smith said.

Slater is in his final month of football before retiring. Smith has indicated he wants to keep playing, although no extension on his current deal has yet been struck.

“I’d like to play on,” Smith said. “I have no thoughts in my mind now that I am finished. That was the case with rep footy: I was well and truly done there.”

Perhaps Smith paused for thought about his future and his legacy when he greeted Johnathan Thurston onto the field on Saturday night for the North Queensland captain’s final match before he, too, retired.

“Not really," Smith said. “It wasn’t about that. All I can control is what I do on the footy field. And the way I handle myself on the field and away from it. Whatever people think of me, I’ve got no control over that. I just go about my business like I’ve done since my first game. What people want to say about me they will say about me."

And with that, Inglis shouldered his way into the media scrum and stuck his phone out like it was a tape recorder. He looked at Smith's thinning hairline.

“Greg Inglis, South Sydney,” he said. “Just with the hair … how did you get it to grow like that?”

That's a wrestle we all must face sooner or later.