Canberra FC are one step closer to clinching the premiership after a stunning come from behind 3-2 victory on the road against Woden-Weston on Saturday.

Canberra were down 2-0 after 17 minutes but mounted a comeback through star import Thomas James, before Michael Mensah hit the winner in the 78th minute. 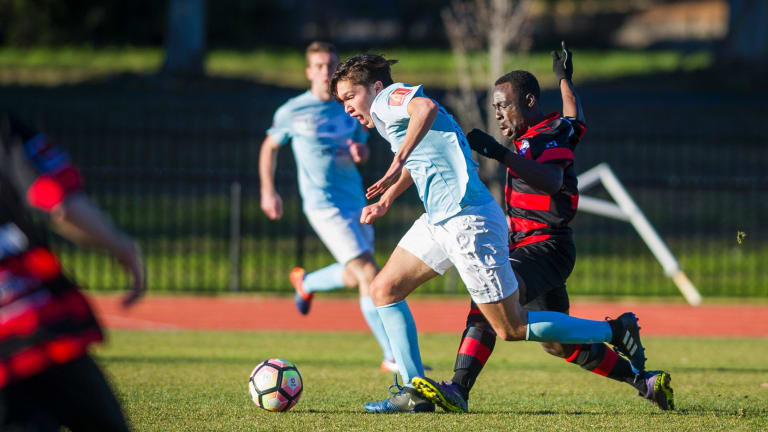 Canberra FC rallied against Woden Weston from 2-0 down.

It means Canberra control their destiny to win the treble and the league title will likely be decided in a final day showdown against rivals Canberra Olympic.

Macor said he wasn't concerned about finals just yet and emphasised he never lost faith in his team's ability to come from behind.

"If you start looking too far ahead you lose what we’re trying to achieve. Even when we were two-nil down I thought we had it in us to come back in this game," Macor said.

"You can’t go hard at the boys. You’ve just gotta be confident and remain confident. My philosophy is ‘always be patient’ because games are won and lost in the last 30 seconds."

Woden Weston coach Rey Castro was disappointed in the loss, but was still impressed that his side pushed Canberra all the way.

"It’s been the story of the season for us. We go ahead and then we give away set pieces when we should be able to take the ball into areas that doesn’t hurt us too much," Castro said.

"But at the same time these boys have made us proud and they can walk with their heads high after this game.

"We challenged them. We couldn’t keep [the lead] but we looked dangerous until the end.

Castro believes his eighth-placed Wanderers played better than their ladder position and said there were encouraging signs for the future.

"If anyone walked on this field and saw us playing they wouldn’t guess we were second last," Castro said.

"It is a young squad. Hopefully we can build up from this season and continue working.

"We want to finish with a smile on our face in this season. Football wise the boys are showing that they are playing good quality football."

Castro was also full of praise for striker Olaide Yinka Kehinde and his contribution despite the result.

"You can see today he fought every single ball and that’s what you expect from a captain," Castro said.

"I’m very pleased with him and we’ll see where the next season takes us."

Torrential rain saved the blushes of Canberra Olympic after their match against Cooma was abandoned at half time when they were down 2-0.

The match will be replayed but the goals to Nick Kalfas and Nicolas Villafane will count for nothing.